Hi hi hihihihiiii!  I missed you all so much! 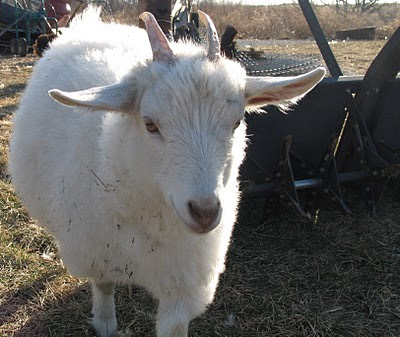 My lady is so busy and never has time to help me type the blog.  It's a sad state of affairs.  But today, we had a special visit, so she said we could blog about it.  My favourite vet came to visit - Dr. Nicholson!  He delivered me out of my real mom, and I would have died it if wasn't for him, so that is why my name is Lucky Nickel, you see?  Anyway, he came over and I was very pleased to see him, and he chatted with me for a while, and then he said to my lady "So we have two boys to do today?" and she said yes, and I thought, what does he mean?  None of the other goats are sick, so why is the vet here?  Even Coffee, who is part Nubian and therefore not all that bright, wondered the same thing.  However, you can see she has a sort of vacant look, like maybe she's forgotten what she is wondering about. 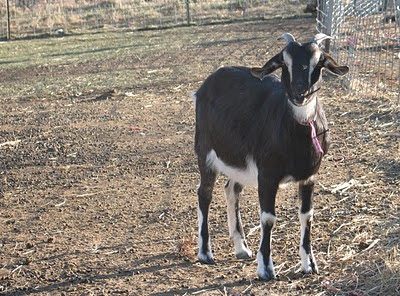 Well, Dr. Nicholson put some things together in a box and I tried to see what was in there but it was a box with a lid and a handle and he gave it to my lady and they went over the fence, all quick-as-can-be, so I wasn't able to try to help any more because I was on the other side of the fence.  Then, my lady picked up Osmo, and she had a funny look on her face because Osmo is a boy goat and she says he smells really, really bad right now.  I think he smells quite interesting, but she wrinkles her nose when he comes near.  She put Osmo on his bum so that the vet could take a look, and I said "Why are you doing that to Osmo?" and she said "Don't worry Lucky Nickel, it's just brain surgery."  Then the vet did something special with some rubber tubing stuff and a metal instrument, and Osmo made some funny noises, and then he got two shots, and he walked away.  I thought he was walking funny though, as if he might have to make goat berries but he couldn't quite do it.

Afterwards, Osmo came over to the fence because he is always interested in talking to me and sometimes I wag my tail at him. 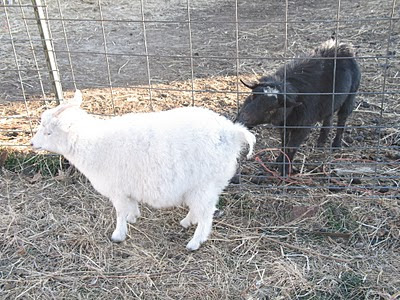 He's kind of cute, don't you think?  Even without a supplemental brain.  It's actually still there, but my lady said it isn't functioning because there is a band to prevent thoughts from flowing to it, or from it.  I don't know what kind of band because I don't hear any music, but I suppose it is a rock band or something and maybe they are on break right now between sets. 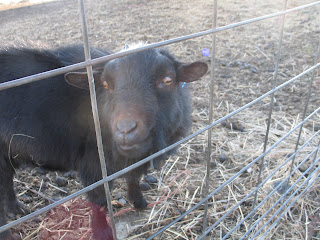 Sometimes he sticks out his tongue at me!  See?! 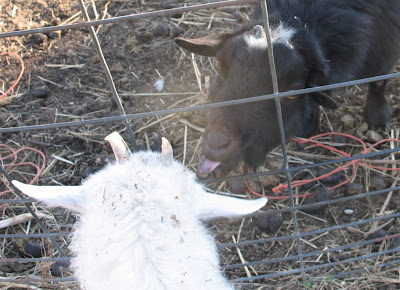 I'm not sure what he does that for. Unfortunately he's not very discriminating because he also sticks out his tongue at Coffee...and, well...she's a Nubian, as I said. 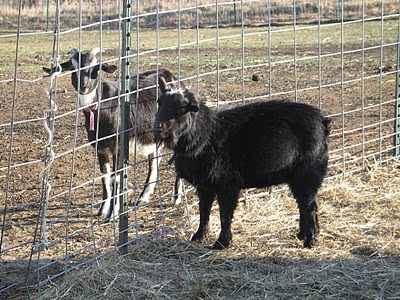 After his surgery, Osmo and I ate hay together on the opposite sides of the fence, but he was in a funny mood and kept on laying down and standing up. 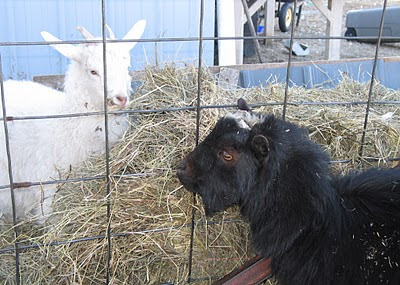 It's like he knew there was something going on with his supplemental brain because he kept checking it. 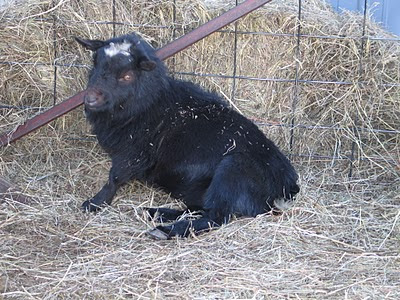 And checking it more. 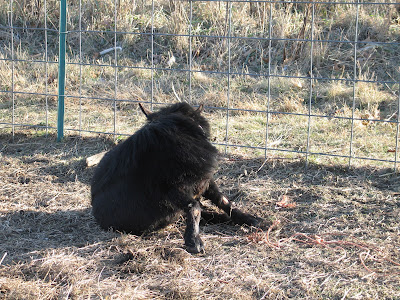 Then he lay down and Springfield the donkey came over to stand with him because Springfield had brain surgery a long time ago but he said he remembered and he felt bad for Osmo. 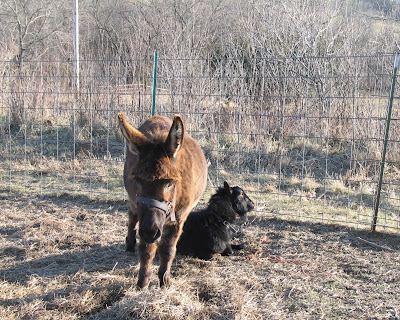 Anyway, my lady did the same thing with lovely Valentino, and the vet did the same thing, and they were all finished.  I was quite confused, because I thought the boy goats needed their brains to remember to eat and drink and remember my name and everything.  My lady smiled in a funny way and said they would actually be much smarter now than they were before because they were being distracted by their supplemental brain.  I don't think it's fair that boy goats are born with a supplemental brain.  I thought I should have one too.  She said the supplemental brain can only think about one thing and it overrides their regular brain and that's why it has to be removed.  She said a lot of boys could benefit from this operation, and not just goats.  When I learned that, I decided it was OK not to have a supplemental brain.

After that I went and got onto the roof of the vet's truck and my lady scolded me, but the vet said to stay there because he wanted to get a picture, which he did.  It is such a challenge to be a celebrity goat.  The vet left and my lady went back to see how Valentino was doing.

Valentino wasn't very impressed.  He lay in the corner of the barn and didn't want to walk around looking like he was trying to make goat berries.  He said it was just wrong to have his supplemental brain removed. 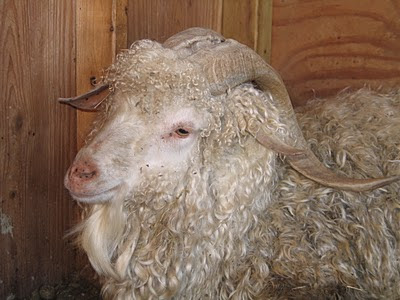 Opal didn't care about any of it.  She was just enjoying basking in the sun. 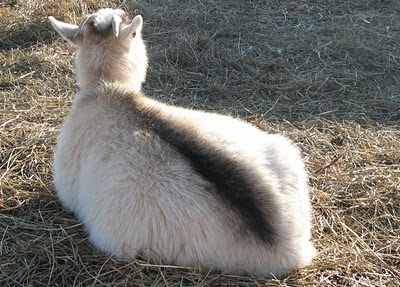 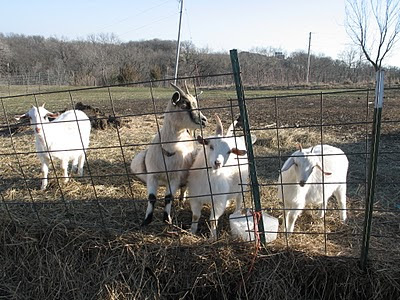 And then of course there's me - just your helpful barnyard reporter.  Until next time, eat well, stay warm. 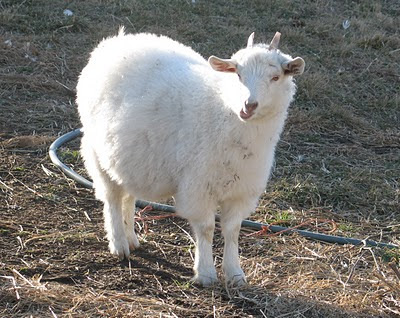