This weekend I attended a rug-making workshop at Legacy Lane Fibre Mill in Sussex, New Brunswick.  The majority of rug-making events in my part of the world are about rug-hooking, which is a technique in which wool fabric strips or yarns are pulled in little loops through a backing in order to make a rug with a particular design.  I have tried rug-hooking, but it's not something I do very often.  My weekend workshop was a completely different type of rug-making technique based on felting.

We used very bulky corespun yarn (spun at the mill) in our rugs - it was about the diameter of one of my fingers - so really thick yarn!  Before the workshop, we had to choose colours that we would like in our yarn.  I chose turquoise, blue and grey.  The yarn is made by wrapping fibre around a 4-ply wool core.  The colours slowly change through the skein.  We had to get the yarn wet and then we created spiral circles with the yarn on the surface of a large felting machine.  Each participant had a space of about 2 by 3 feet on the table.  I didn't take any pictures during the process of making the spirals, but here you can see the felting table surface. 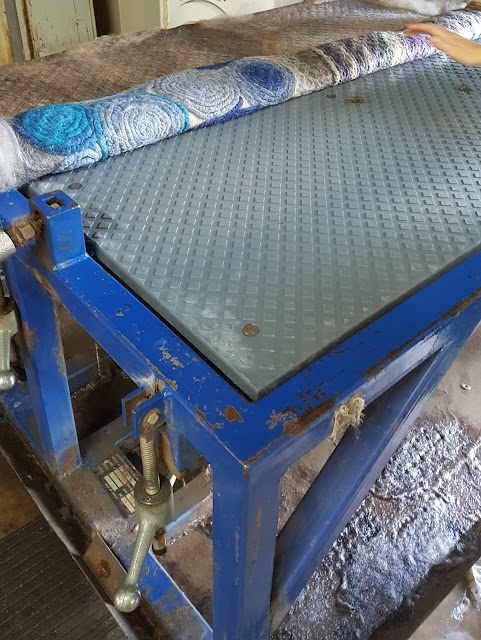 After making our spirals, alpaca/wool batting was placed on top of the spirals to form the rug base.  The felting table has a large, heavy top, which is closed to squeeze out all the water and to begin agitation of the wool, which starts the fulling process.  Fulling is a step before felting, during which the fibres begin to lock together.  After 10 minutes on the felting machine, the lid is lifted and you can see here the backing fibre which has been compressed and fulled against the spirals.  Twp rugs fit on the press. 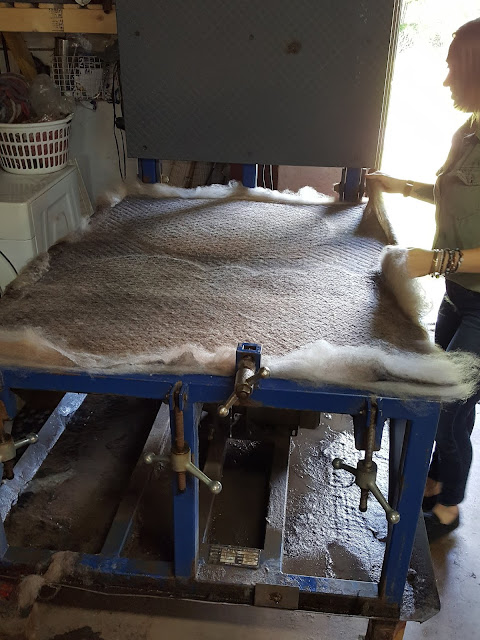 The rugs were then transferred in a 'sausage roll' format into a spin dryer.  They did a normal spin cycle in an old top-loading spin-dryer before being put outside in the sun to dry.  Fortunately it was a beautifully sunny day with some good wind to get the rugs drying quickly.  Here's my rug along with another one when it first came out of the dryer.  You can see how the spirals adhere to the backing felt, but at this point, with a little effort, you could have pulled it apart. 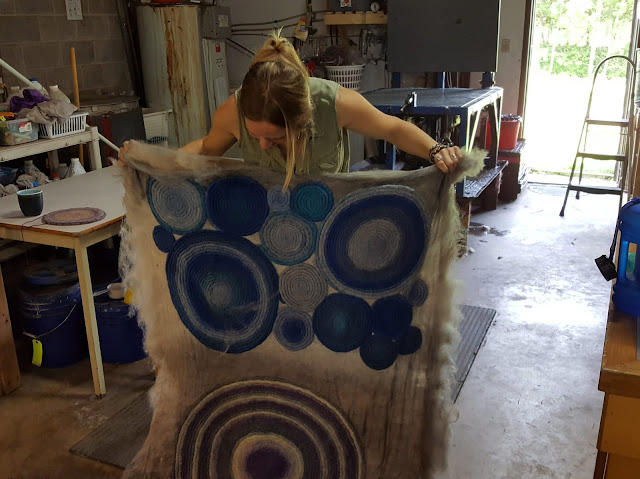 While the rugs were drying, we learned how to do blanket stitch on a small sample rug, since our rugs will eventually be blanket-stitched all the way around to keep the edges nice and sturdy.  The resident mill cat, Cookie, supervised from her own blanket throne, although she did do some sleeping on the job! 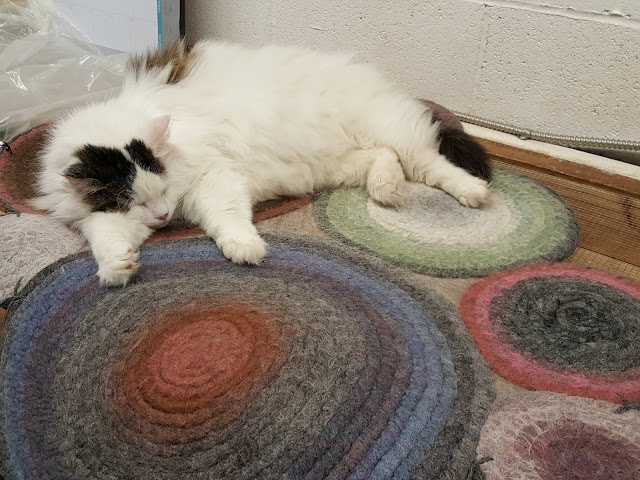 After the rugs were mostly dry, we had to cut them roughly around the edges before they could go into the needle felting machine.  The needle felter pokes hundreds of felting needles into the surface of the rug, and as it felts, the rug begins to shrink a bit.  Keeping the edges wide ensures that the shrinking doesn't go too far. 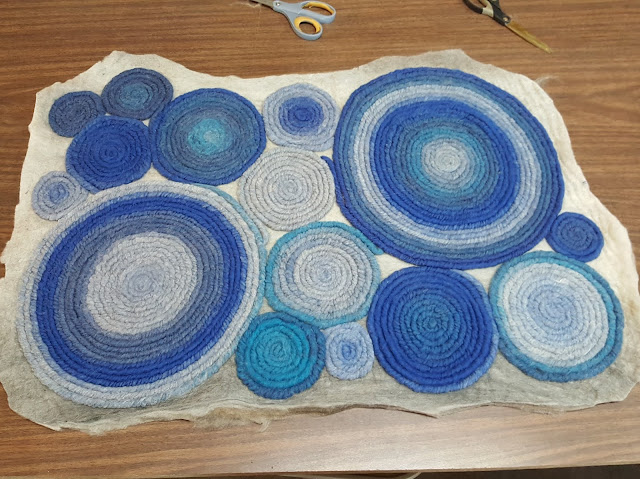 The rugs get passed through the felting machine ten times in total - five times per side.  Each time you put it into the machine, you vary the angle so that the needles don't always go in exactly the same place.  Here's a couple of rugs being fed into the needle felter. 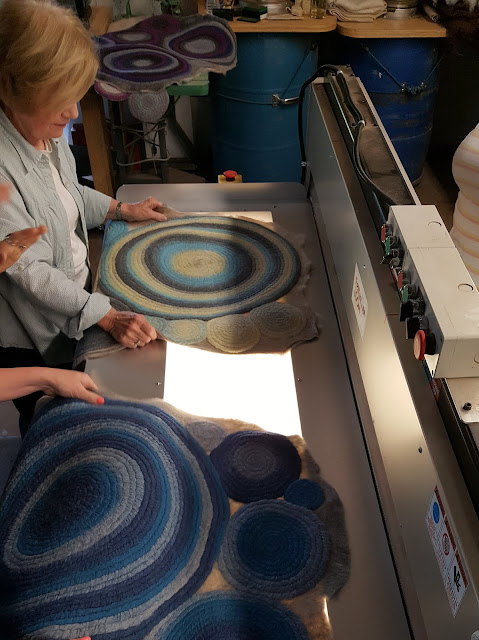 Here's mine coming out the other side after one of the passes.  The needles compact the wool each time, making the colours more vibrant on each pass. 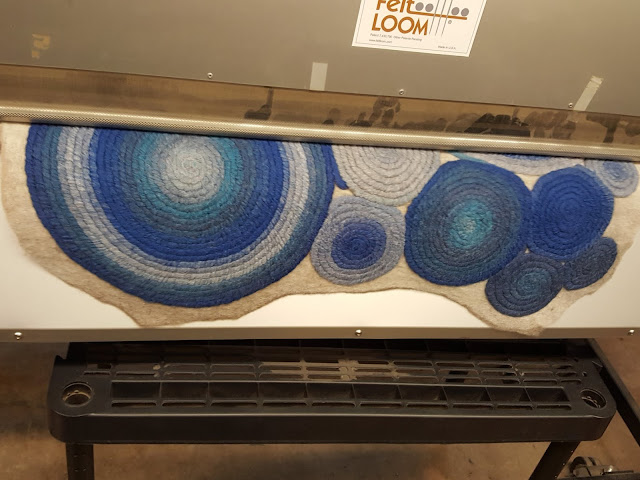 After the ten passes through the felter, the rug is ready for final trimming, which is done much more closely to the edges of the spirals.  The last step will be blanket stitching the edges, which I haven't yet done.

All the rugs were beautiful.  This one looks like it belongs in a spa. 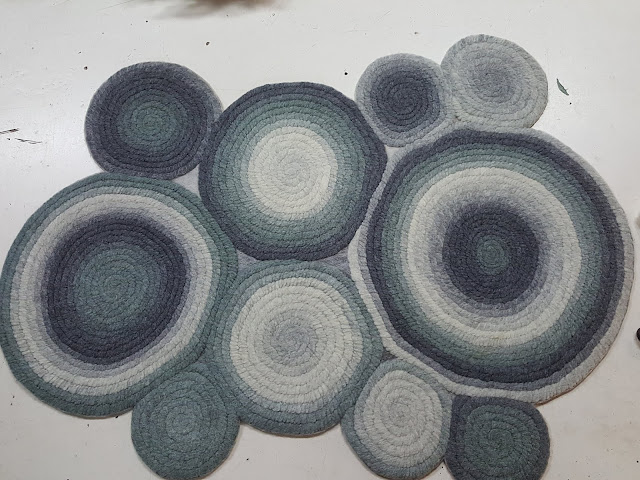 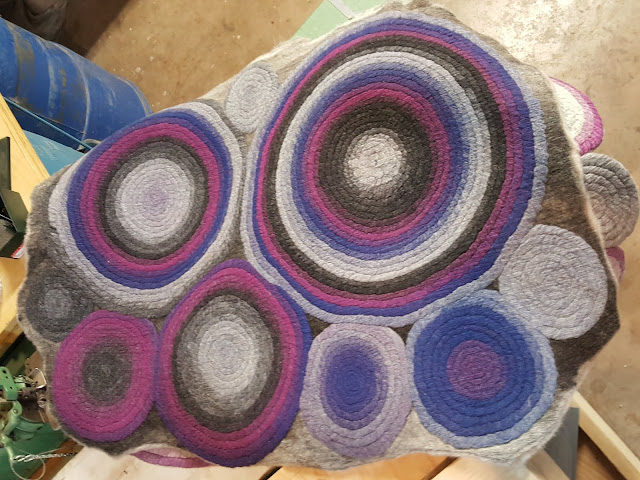 Some prior rugs we were shown as examples demonstrate how you can use just natural fleece colours if you wish, like this one from 100% alpaca. You can see the blanket stitching on this one. 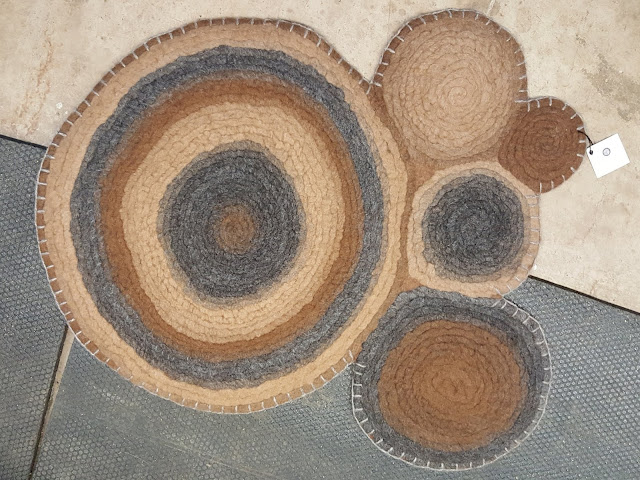 Here's my final rug at home, with my foot in the picture for scale.  I'm really pleased with how it turned out, and I think I'll use it in the bedroom or bathroom.  It's so soft on the feet! 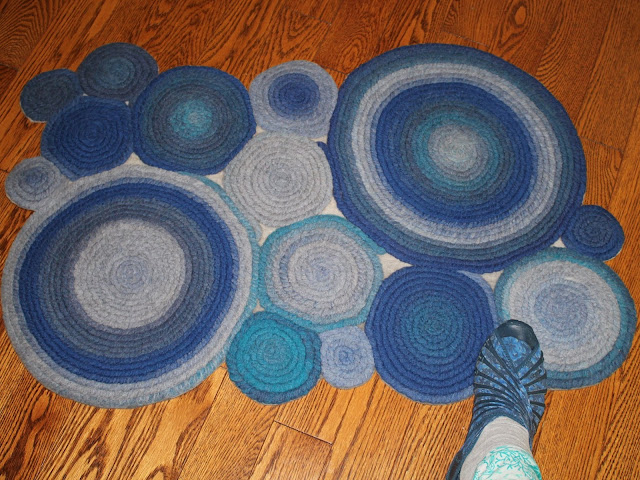 Here's a really quick blog post in the midst of busy times - I just had to share!

This morning I awoke to the hairy woodpecker making quite a racket outside my bedroom window.  He's not usually that vocal and I wondered what was up.  I watched him for a while and nobody was chasing him or causing any distress that I could see.  Then I wondered....does he have a baby out there?

I went out quietly to let the chickens out as usual, and sure enough, the woodpecker was still there, chirping loudly at something.  I ventured closer (the male hairy woodpecker lets me get very close when he's on the feeder so I wasn't too concerned).  Sure enough, there on the ground was his wee son, all wet and bedraggled. 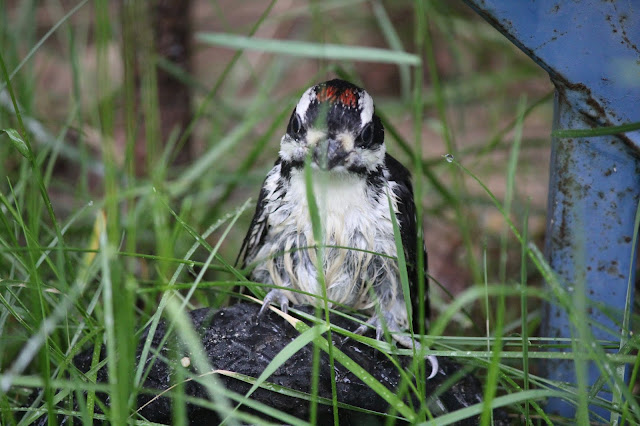 I used the zoom lens so as not to disturb him too much. 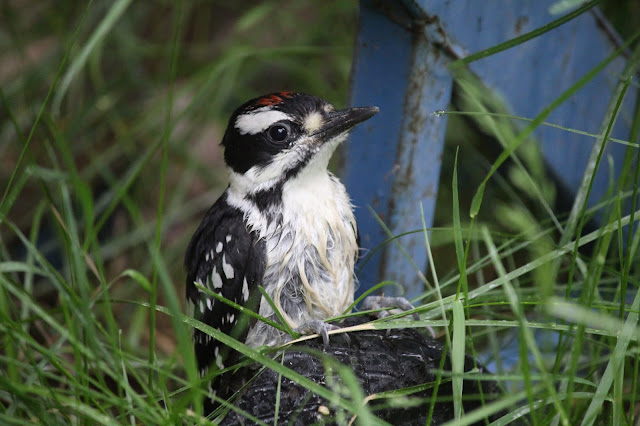 After watching Dad feed him a few times, I moved him, because I'm worried about the neighbor's cat.  I put him to a higher location, up on the post where I keep my clothespins and weather station components. 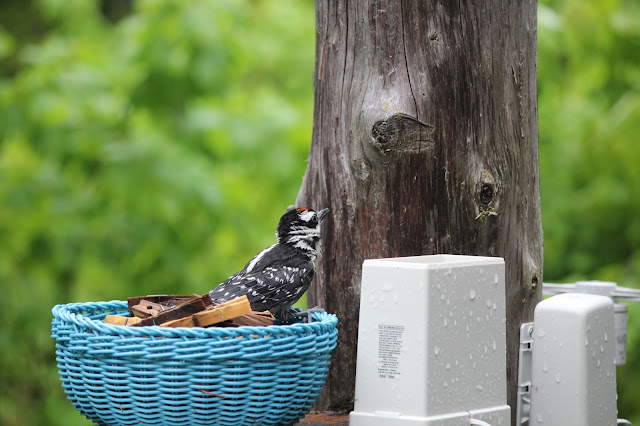 I continued to watch Dad bring him insects.

Learning to climb is tricky for young woodpeckers! 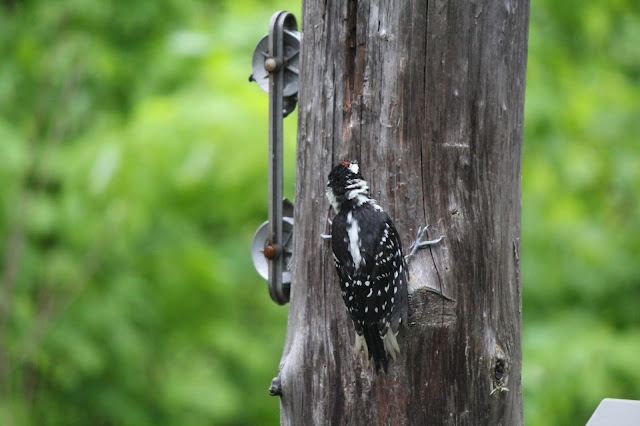 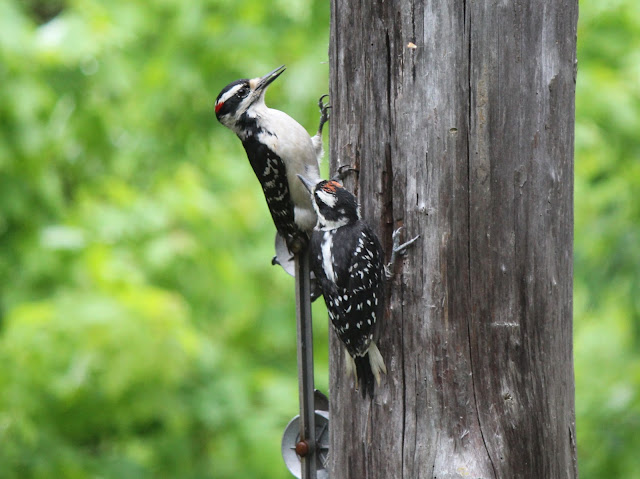 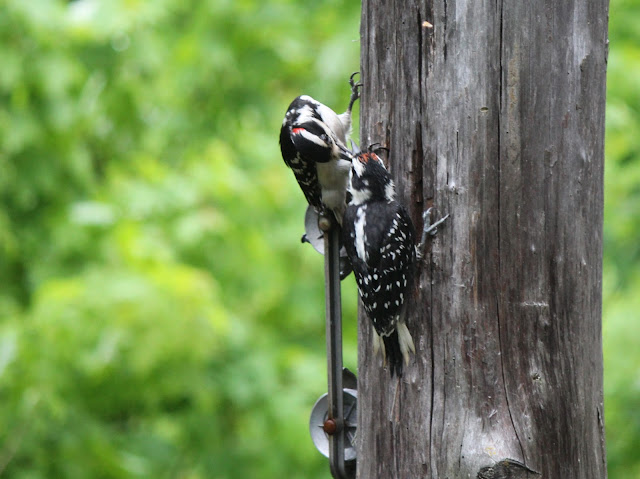 I hope he learns to get up off the ground quickly and go on to live a long, insect-fuelled life!
Posted by Claire MW at 8:45 AM 4 comments: