On April 25, I posted about working on my perennial bed, and I shared this shot of how things looked after I'd dug out all the matted grass and a lot of weeds: 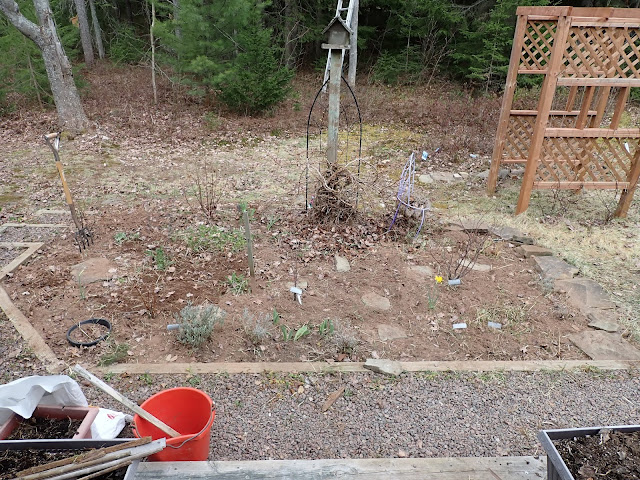 Yesterday, on June 5, the same bed has come along quite well, and here's how it looked (ignore the plywood in the background - that's another project underway!) 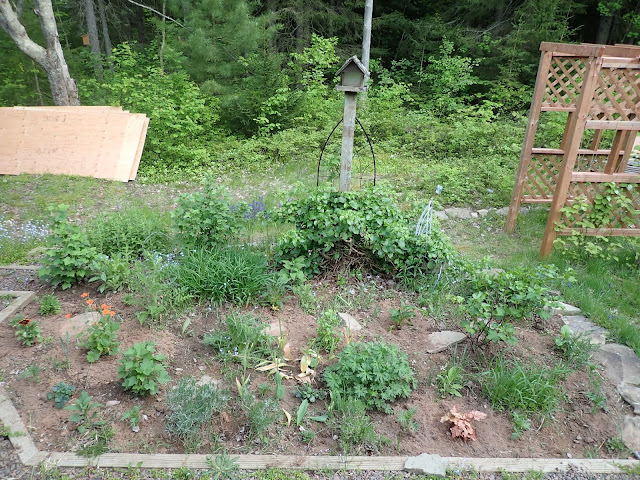 I'll give you a little guided tour!  Along the front, in the first picture, you can see some lavender plants, which have now begun to put on new growth and are looking relatively good. There are some red tulips that are finishing.  To the right of the lavender, you'll see a new plant I put in yesterday.  It's a Heuchera "carnival watermelon" that has kind of pinkish-gold leaves.

Here's a closer shot of the heuchera and surrounding plants.  I like the interesting colour pop and heuchera seems to do quite well for me.  To the left is a cranesbill geranium that wasn't yet up in April, and to the right is a perennial ornamental grass. The cranesbill has dark purply-blue flowers on it that should start showing up fairly soon.  There's a volunteer foxglove coming up just behind the heuchera, and then I've put in a couple of marigolds for summer colour. You can also see the jostaberry in the background, now that its leaves are out, whereas in April it was just twiggy bits! 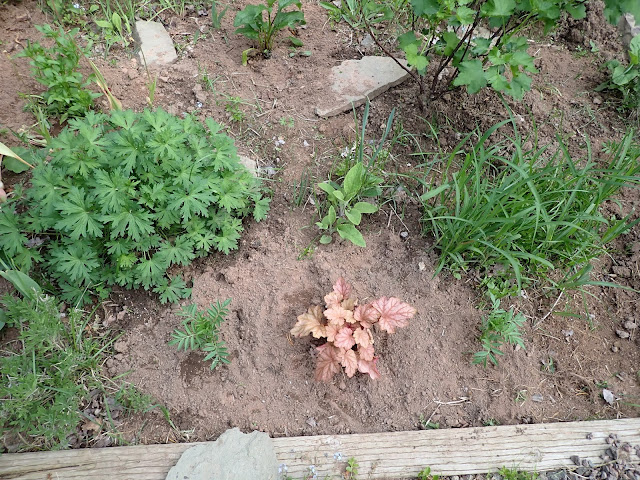 Here you can see a closer shot of a daylily that is on the rear left side that was barely starting to come out of the ground in the first picture.  The climbing hydrangea on the trellis has now leafed out.  I planted a couple of new Echinacea called "Cheyenne Spirit." The tag showed a bold yellow, but I've since learned that this particular strain can have different flower colours including yellow, orange, cream, and purple.  I hope it is more in the yellow/orange range on the plants I bought because I'm trying to make this bed orange/yellow/red themed.  I'm really not at all fond of red and pink mixed together in one bed, so I prefer to keep my beds in the pink/purple/blue range or the orange/yellow/red range.  There's another blackcurrant on the back left, next to some yellow loosestrife.  I also planted (in the front right of this picture) a coreopsis called "Uptick" that is supposed to be a light yellow with a reddish centre.  If the Echinacea comes out in a colour that doesn't work for me, I'll move it elsewhere in the garden. 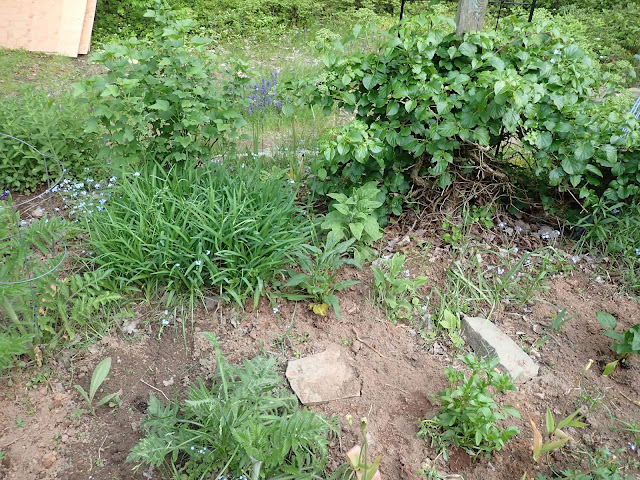 On the far left of the bed, I have a lovely geum called "Mrs. Bradshaw" that my mom shared from her garden.  It is already blooming well, and is in the right colour range for this bed.  Over time, it will get bigger and I should be able to divide it. To the right of that, I've planted two Rudbeckia "Toto Rustic" which as you can see, is a two-toned bloom in the yellow/rust colour range.  There is a coral-coloured poppy coming on well in the middle of the shot below, and I put a couple of small heuchera "Bressingham" for their nice mounding habit.  Again, you'll see a few more marigolds (orange and yellow) tucked in the edge of the bed. There is a bachelor's button plant that will bloom soon, but I don't mind the dark blue/purple colour with the orange/yellow flowers, so it can stay there.  There is some purple in the rear right but that's just ajuga (bugleweed) in the lawn.  I leave it for the bees. 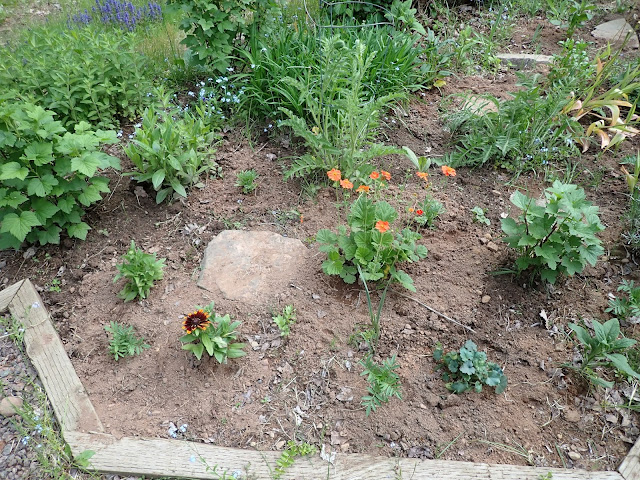 Here's a close-up of the Rudbeckia. I thought it was rather pretty at the garden centre, so I couldn't help buying a couple to try.  They only grow 10 to 14 inches tall, so I put it near the front of the bed. 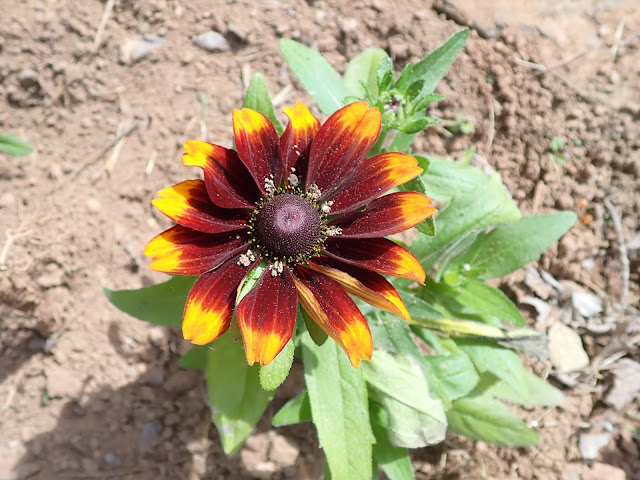 We'll see how things come along with time.  No doubt I'll move some things around or add things over time, but for now, I'm happy to see that it has a bit more organization and will hopefully give good pops of colour over the season.  The volunteer foxgloves will likely be pink, which isn't going to work in the colour theme, but some of mine are a soft apricot colour, so if the seeds came from one of those, I might get lucky and have one that does blossom in the right colour range.

I'll try to do another update later in the season when things have filled out a bit more.  It will help me next year to look at these pictures and figure out what needs to move or change, and what worked well. 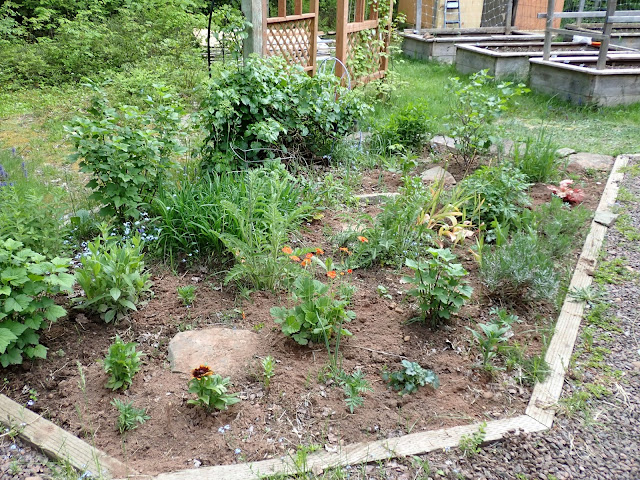