Today, I made the exceedingly bad decision to go cross-country skiing for the first time since my teen years.  I had downhill skied in my 20s, and had enjoyed that, but hadn't been back on cross-country skis in probably 32 years or so.  The winter before last, I had purchased second-hand waxless cross-country skis.  I didn't try them last winter.  Having found local trails that seemed appropriate, I thought this would be the right time.

I journeyed up to the trail with my skis and easily remembered how to do the bindings (yes, they're the very old 3-prong sort that require zero skill to use).  I stood on the skis and surveyed the trail ahead of me.  How delightful.  This would be great exercise and perhaps even a bit of fun as well. 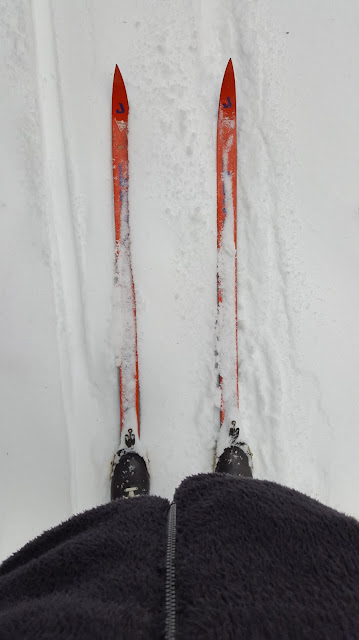 So off I went, full of vim and vigour, trying to get that easy stride motion back into my 51-year-old limbs.  I thought I was sort of getting the hang of it at one point, but things rapidly began to decline.  First of all, I was using waxless skis.  Now, when I was a youngster, my Dad would wax our family skis and he knew what colour wax to put on and did it all for us, so I never learned much about the waxing process.  When I learned (2 years ago) that waxless skis existed, I was pleased at the thought that I didn't have to go through that whole process of waxing and removing wax from skis.  All very convenient, I thought.  And I suppose it would be, if I went out in the right temperatures...which did not cover today's outing.  It said -2C on the weather station, and "feels like -4C," which I thought would be OK.  Wrong!

So, just a short period of time into my ski experience, I began to feel unsteady, and noticed that I was developing significant build-up of snow under the foot area on the ski.  This made it sort of like walking in high heels on snow, but high heels that had a v-shaped point on the bottom that aligned in the direction of one's foot, such that on each step, the tendency for the ankle to veer far to the left or right, was equally likely.  It got to a point that every 3-5 steps I took, my ankle would twist completely out to the side, sometimes on both legs at once.  I began to worry that I was going to break an ankle.  However, the folks who kindly groom the trails really frown on walking on the ski trails, so I carried on, trying to scrape the undersides of my skis off on trees every so often. Not very helpful for more than 3 or 4 glides.  Speaking of glide, there really wasn't any.  It was more just a matter of walking with skis on, after a while, but with the high-heels-ankle-twisting-outward-to-90-degree-angles-with-my-leg aspect.  This was really putting a dent in my enjoyment of the experience. Someone who had been before me (see the nice trails below) seemed to have no difficulty at all, but I was definitely not sharing their experience. 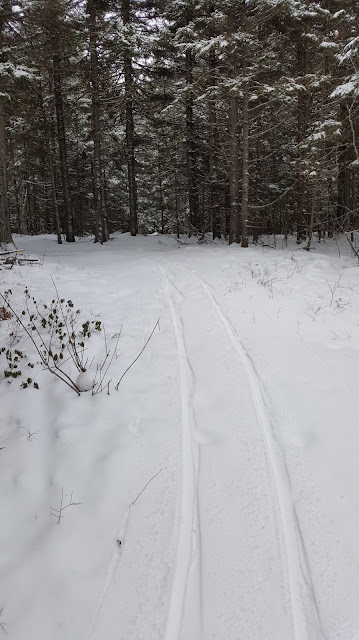 Then, there was the hill.  I came to a hill that was a wee bit steeper than I had expected, but given that I had no glide and given that my skis had so much build-up of snow on them, I figured I could just sort of walk down the hill.  I guess there's a point at which some principle of physics kicks in...might have been gravity...momentum...path-of-least-resistance.  One of those sorts of things.  Anyway, after a step or two, suddenly, I was no longer looking down the hill.  I was looking at the sky, shortly after having the wind knocked out of me when my back solidly hit the ground.  I had that "what just happened...?" feeling for a moment, and then had to sort of re-orient myself so that I could stand up again, having made it some way down the hill on my backside.  It took me some effort to actually get upright again, and I felt like a drunk ostrich, limbs all splayed around and a total lack of coordination.  I finally managed to orient both skis in the same direction, find a tree willing to assist with the uprighting process, and gather the contents of my spilled pockets (why, oh why did I not wear the jacket with the zipper pockets this time?).  I stood up and began to brush some of the snow from my backside and...suddenly, with a tremendous sense of deja vu, I was looking at the sky again.  Drat.  A few bad words may have slipped out.  I once again righted myself and slowly, sideways, eased down the rest of the slope.

The longer I went on the trail, the more the build-up on the skis persisted, and the more I was twisting each ankle.  It was a wonder I made it to the end of the trail at all.  I'm sure it took me at least double the normal time to complete the trail, and it was definitely not a fun outing.  So today I have learned that I will not go skiing again when the temperature is too close to zero (Celsius) and I will not wear my jacket with the zipless pockets.  I may be sticking to walking for the next little while, until it gets quite a bit colder again. I'm at home for now with sore ankles and an offended back and shoulder.  This is not particularly helping with my quest to find ways to enjoy winter that are more active than snuggling under a blanket with my knitting and an audiobook.

Of note, since I was spending some considerable time flailing about on the ground, I did notice that the snow fleas were out in abundance.  If you're not familiar with snow fleas, which are not actually fleas, but rather springtails of the Hypogastrura genus, you can read more about them here.  They are very helpful little soil critters.  They only come out on warm winter days, another sign that it was too warm for good skiing.  They're actually dark blue, but they mostly look black against the snow.  Anyway, that was probably the highlight of my ski adventure. 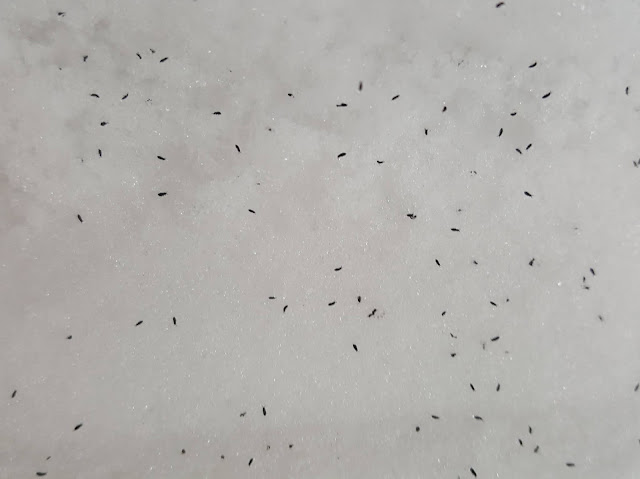 I'm not a fan of winter.  I love bright green growing things and warm breezes.  I like watching my chickens dig in the dirt instead of huddling in the coop.  I like to dig my own hands in the dirt, rather than stare morosely at my snow-covered raised beds.  Really, I just want to hibernate from about mid-December to about mid-April.  However, this year I'm trying to get outside more often and exercise, and try to find things to enjoy about the deep freeze.  Therefore, earlier this month, I bought snowshoes. 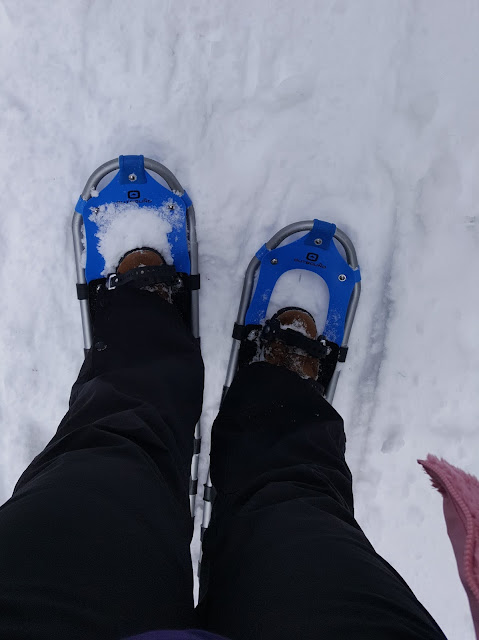 I've been out on them a few times and it's good exercise.  I didn't realize how much different it would be to regular walking.  There is a park quite close to me that has some snowshoe trails.  In theory, they are quite pretty.  I prefer them when all is bright green and growing, but still, at least it gives me a place to go and wander.  As you can see in the photo below, there are also ski trails, and I will try to get out on my skis soon as well. 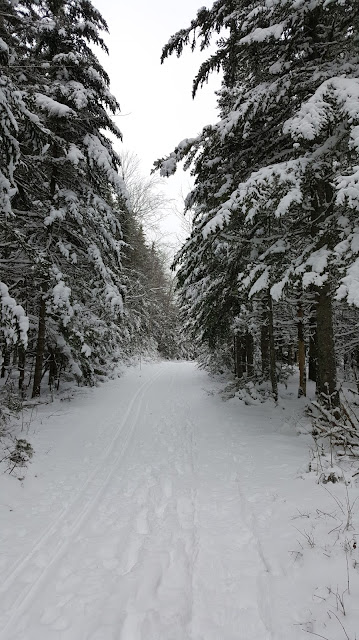 But when I sit down for a short rest and I'm faced with this...it's just not very appealing to me.  It all seems so bleak and grey and dreary. 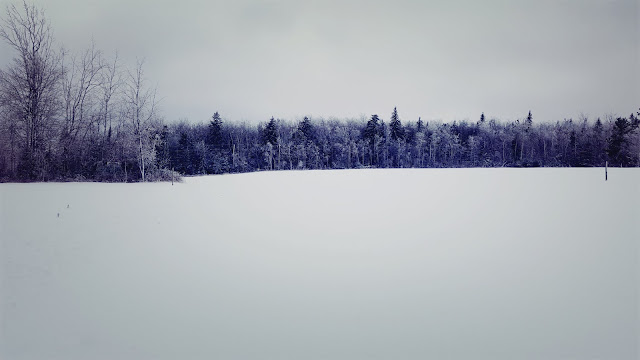 The trails get used quite heavily, and after a few days, snowshoeing wasn't really as effective.  Using snowshoes on trails with packed snow is sort of like trying to snowshoe in your living room.  The snowshoes just get in the way.  However, I'm still going for walks.  A couple of days ago, it rained for several hours, which is quite unusual for this time of year here.  That made all the trails a slushy, icy mess, because it went back into deep freeze mode the next day.
Today I went for a walk with my yak-trax on my boots, to ensure that I didn't have any tumbles.  I've found two new-to-me trails not far from where I live that go through the woods and provide me with 2.5 km loop walks.  So I'm trying to do one or both of them at least 3 days a week.  A friend of mine has gone with me a few times and she took a picture of me looking at lichen on a tree the other day.  We have to maintain 2 metres of social distancing to be able to go on the trail together, but at least it's a good way to connect for a while. 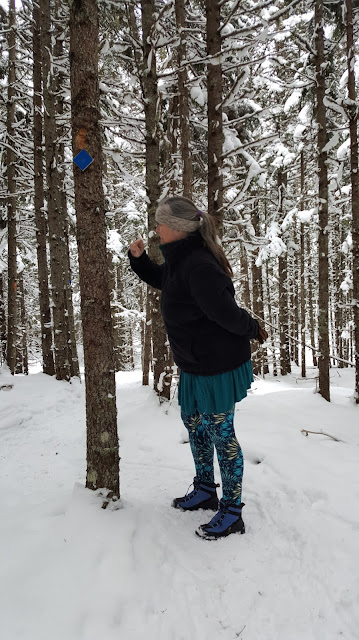 I'm also finding lots of lichen to photograph and I've purchased a field guide to lichens to try to learn how to identify the species in my area.  In the meantime, I still take the odd photograph to record my snowy walks and try to appreciate the winter quiet. 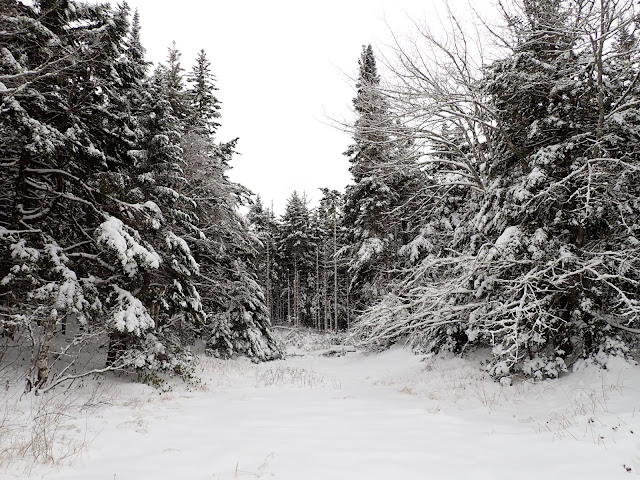 I like walking beside this creek, which is still running and not frozen over.  It makes a very soothing watery soundtrack for walking. 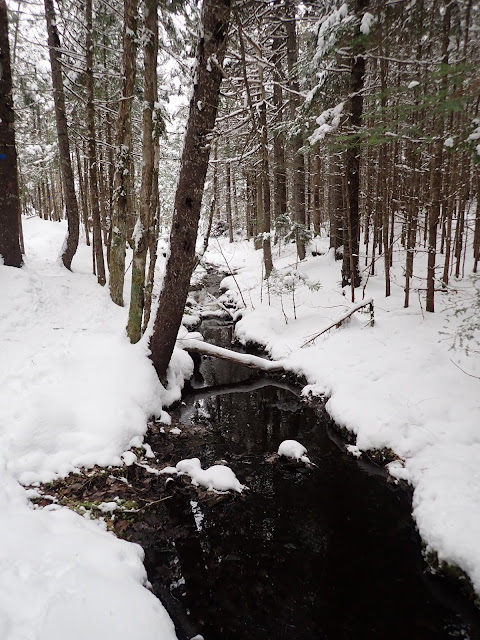 So I'm half hibernating, and half trying to get outside.  It's still something I have to force myself to do, but maybe eventually I'll start to appreciate some aspects of winter. 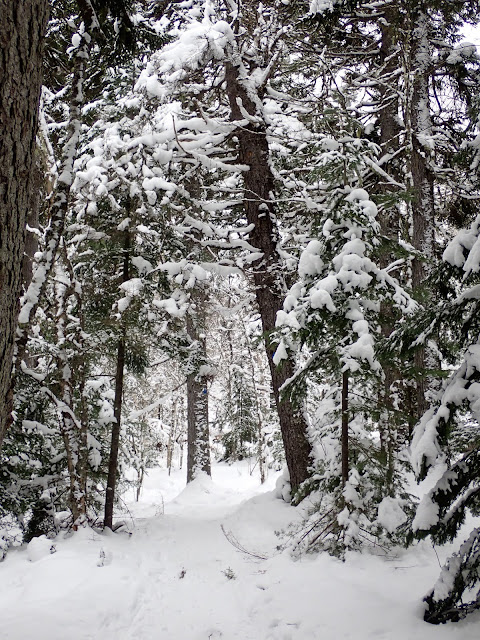