I keep most of my roosters in a separate coop.  This is partly because you can't have too many roosters in a group of hens, because they are a bit too ardent with their interest in the hens, and they pull all the feathers out of the hens' backs.  In addition, they tend to be more aggressive with each other when they are with hens.  When I keep the roosters separately, they don't fight much and the hens are happier.  Sometimes, though, the roosters don't want to be kept in the coop, and they insist on escaping and running around free ranging.  I have had a couple of roosters who free ranged for the past couple of years now - Cornflake and Fancy Pants.

Cornflake liked roosting in our garage on a shelf mounted on the wall.  This was OK, although he made a mess, and he liked to hang out on our front step, where he also made a mess and which made it difficult for people to come in the house without stepping in chicken poop.  I put up with it though, because sometimes you just have to go with the flow.  Sadly, however, Cornflake met his end very recently as a result of a Northern goshawk.  That's a risk that accompanies being a free-ranging rooster.  He had a great life though, running around the yard, having treats from my garden, and always having a safe place to sleep.

The Northern goshawk is a beautiful bird as well, and although I was sad about what happened to Cornflake, the goshawks have to eat too.  I'm not sure if the goshawk is going to keep on coming here for its meals....I hope not.  I think Cornflake might have been an easy catch because of his white colour against the dark of the driveway (which is where he was taken), but he was free ranging for a couple of years so he couldn't have been that easy! 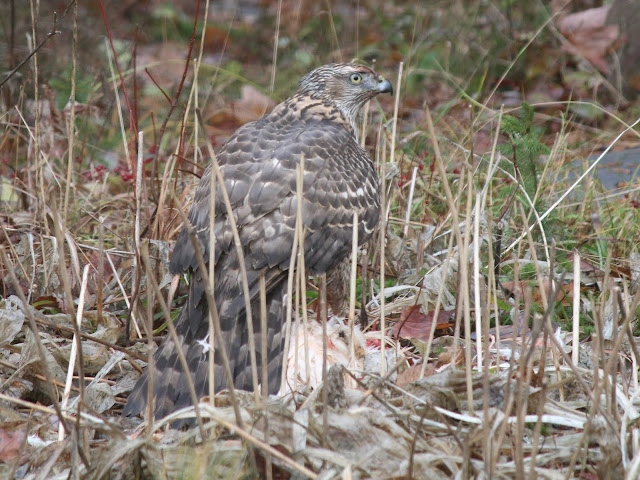 Meanwhile, I recently adopted a silkie rooster who needed a new home.  I didn't really need more roosters, but I have a bit of a soft spot for silkies.  This little guy was in need of a new home because he'd been purchased as a hen, but then started to crow, and he lived in town...where they aren't allowed to have roosters.  The owner wanted to find a local home so that her daughter can still visit from time to time, so I decided to offer him a home.

It has been extremely wet for the past month and the chicken yard was absolutely horrible. The mud has been very thick and slippery, and I knew that would be bad for silkie feet, which are feathered, so I decided to keep the new roo inside for a few days.  I put him in a rabbit hutch that I had previously used for another chicken who was sick...but that was over a year ago.  I didn't really think about it when I put the new roo into that hutch, but the next day, his legs seemed to be paralyzed and he was not walking at all, which were the same symptoms in the sick chicken from before (who died within days).  I was absolutely horrified that he seemed to have gotten so sick so quickly, and that it might be my fault for putting him in the hutch where the other sick bird had been.  My fear was that he had contracted Marek's disease, which is a viral illness and which I have had before in my flock.  It does cause leg  paralysis.  However, in reading up on it, I learned that even if a chicken does contract the virus, it does not begin to show symptoms for 3 weeks, so there was no way that this new rooster had contracted Marek's overnight.  I was very worried about my new roo, and kept him warm and well fed (fortunately he was still eating and drinking even though he couldn't walk).

Amazingly, over the course of 3 or 4 days, he made a recovery.  In addition, the temperatures dropped and we had some snow and the ground froze, so the mud problem was solved.  A few days ago, I was able to put him out in the main coop.

He's actually what they call a "naked neck" silkie, so it's normal that his neck doesn't have feathers. 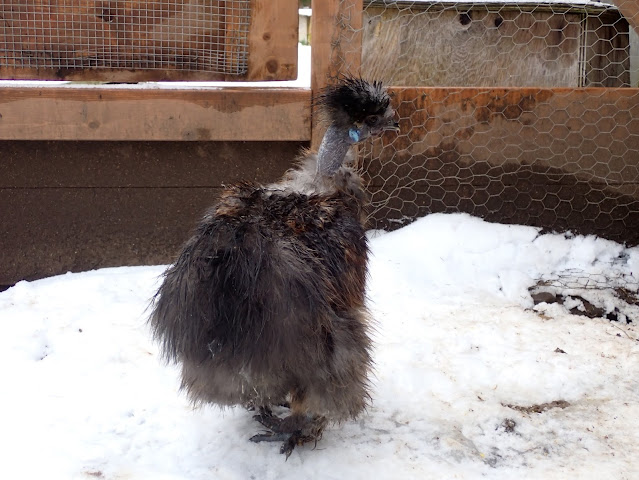 He has lovely blue earlobes.  It was raining a bit today so these shots aren't the best, but you can see what he looks like anyway. 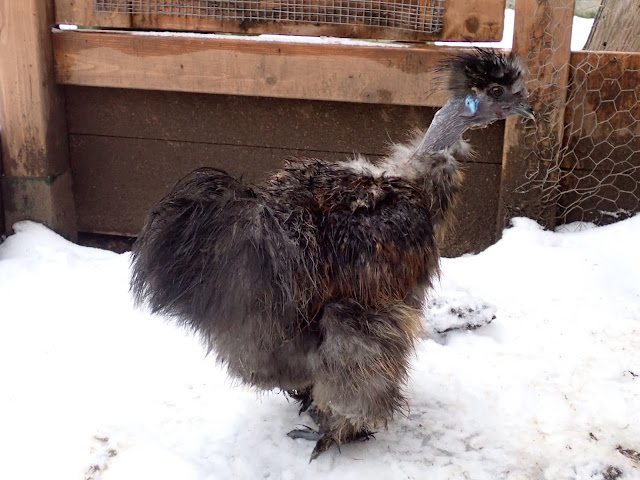 I still don't know what was wrong with him, but he's walking just fine now, and has no lingering symptoms that I can identify.  That's also not consistent with Marek's so I'm pretty sure it was something else entirely.

Here's a shot of a hen (middle) who hatched a little one late in the fall.  Her 'baby' (not sure if it was her egg or not) is the barred one off to the right.  It's a cute little one - I hope it's a hen.  This hen somehow has managed to avoid being named so far.  I really must give her a name.  The one off to the left in this picture is named "Little Grey Hen" (a nod to the Little Grey Rabbit books by Alison Uttley, which you'll likely be familiar with if you're my age or older and if you have a UK background).  She's not little, but she is grey!

The new rooster was picked on a bit on the first day, as expected, but he seems to be blending in now and I don't notice him being pecked a lot by the hens, although he's still being chased out of the main flock most of the time, which is normal for a newly integrated bird.  Here he is with one of my newer ISA brown layer hens. 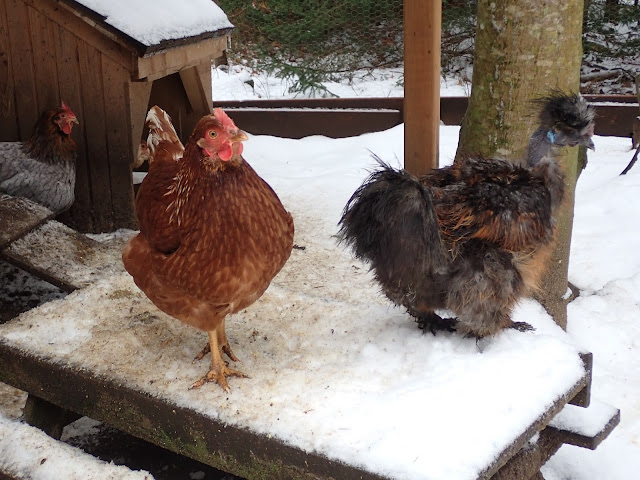 I was hoping he would become a friend for Whisp, one of my first chickens from my new flock here in NB.  She is a silkie who is at least 5 years old, and the only silkie in my flock now. Sure enough, last night, I caught him snuggled up to Whisp in the coop at bedtime.  So sweet!  I'm glad she has a new friend. 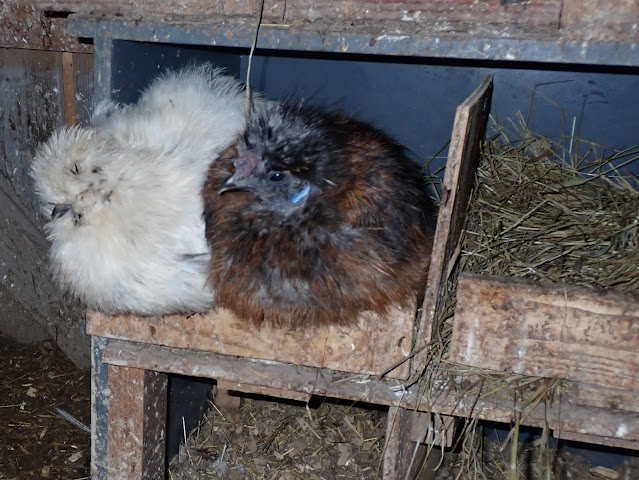 I think he might be named Stormy, because I picked him up during a torrential rainstorm.  On the other hand, I called him Pickles today, because it just came to me out of the blue when I was talking to him. Sometimes it takes a while to get the right name.  I'll keep working on it.
Posted by Claire MW at 8:18 PM 1 comment: