Spring is continuing here in my little corner of the world.  In fact, we've had a few days now that feel distinctly summer-ish.   I thought I'd write a little bit about the latest activity around here.
The garden has progressed wonderfully.  I'm really excited about the progress in the greenhouse.  I have a local helper who is coming out several mornings a week and he is just fabulous.  I keep an ongoing list of tasks that I'd like help with, and he comes when he's able to do so and puts in a few hours of time to help out.  This means that a lot more is getting done here, so I feel good about that, while he's able to supplement his income and enjoy seeing the progress of his work, which I think is rewarding for him.  It's a win-win!  I hope I'll be able to share some of the bounty of the garden with him and his family later in the season.
Here's a view inside the greenhouse.  My helper placed paver pathways inside the greenhouse so that I have space to walk and tend to the plants.  He also placed the cross strings at the bottom and top of the rows.  I planted the tomato transplants and put the upright strings in place.  The plants will grow upwards and I will gently wrap the string around the main stem as it grows, thereby supporting the plants.  This will make pruning much easier, and will facilitate easy picking of the fruit.  The plants are already doing well and looking healthy.  I planted some tomatoes in a raised bed as well, just for comparison.  I already see a significant difference. 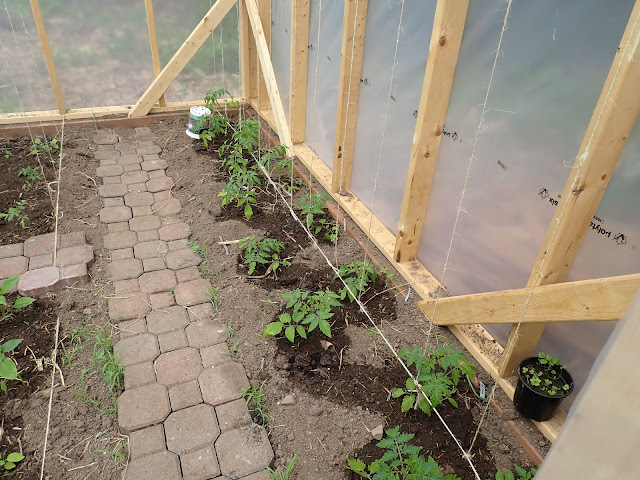 The raised beds have been all planted - kale, cauliflower, broccoli, broccolini, carrots, parsnips, shallots, onions, peas, runner beans, kohlrabi, beets, fennel, melons, squash, tomatoes, potatoes, and herbs.  All the beds had some compost supplement as well.  I have ordered the parts for installing a drip irrigation system for the new raised beds.  I'm hoping we can get that installed soon after the parts arrive.  Here are the four new beds and the 2 small new raised beds by the greenhouse. 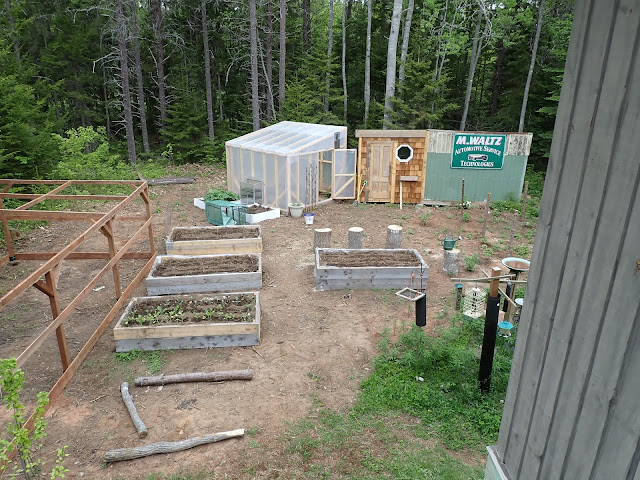 Marc has also been very helpful this weekend with the planned expansion of the chicken outdoor run.  They will now have more than double the area they used to have for free roaming, while remaining protected from ground and air predators.  Marc spent a lot of time yesterday and today putting in the posts and building the supporting structure.  Next will be chicken wire and hardware cloth (at the bottom).  Eventually the new area will connect to the old, but the idea was to build as much of the new area as possible so that the chickens didn't have to be confined to the coop for a long time now that the weather is warming up.  The new area will have a partially roofed area that will allow for winter dust bathing because it won't fill up with snow.  Happy chickens! 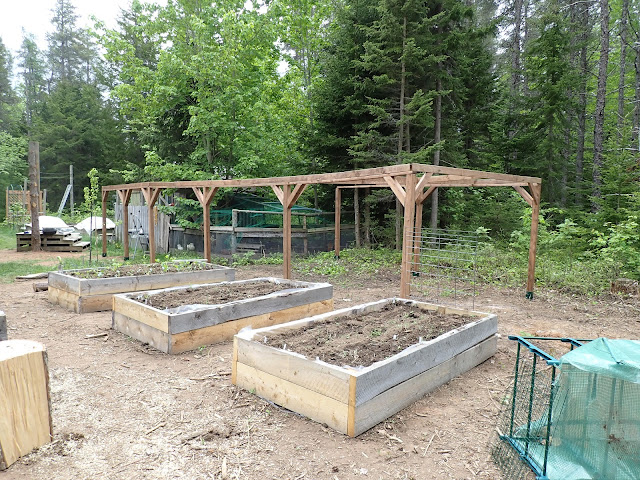 Here's the view from the top so you can see how much bigger the enclosed area will be. 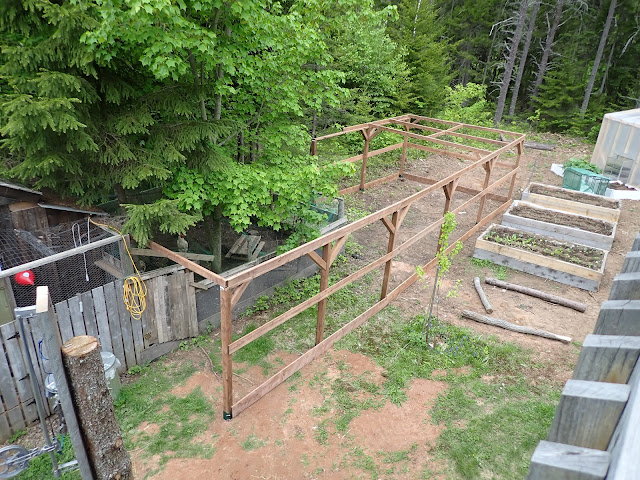 The initial 11 chicks that I hatched are all doing well and are learning to go to the roosts at night instead of hanging out on the floor.  They are such a lovely bunch.  I hope quite a few are hens but it all remains to be seen.  Another 13 chicks are currently being raised in the house, and there are just a few still to hatch.  Of course, a large portion will be roosters and will end up being soup stock, but that's part of raising chickens.  This black and white one is the biggest one.  I suspect he's a roo. 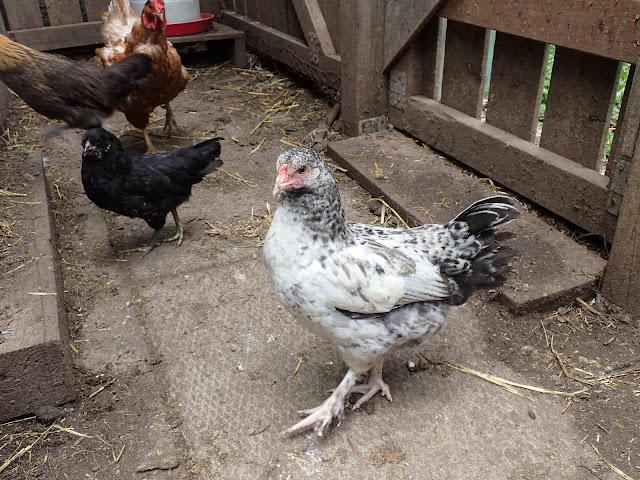 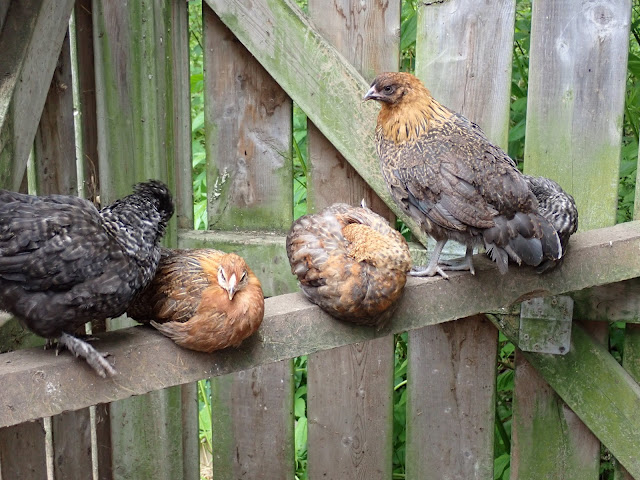 I love the unusual plumage on this one.  I hope she's a hen! 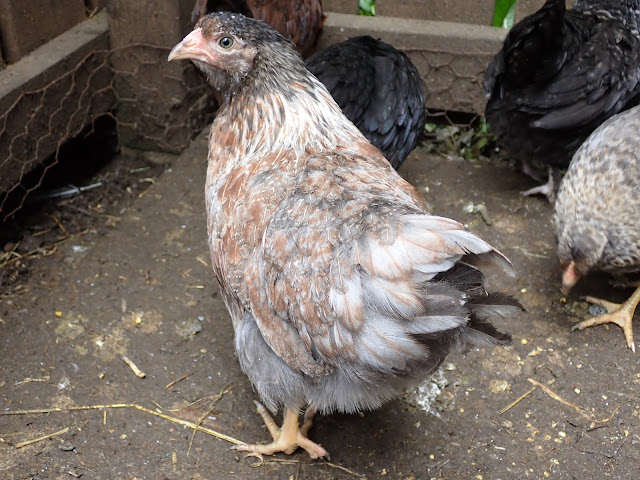 Sir Francis' area isn't quite finished yet, so today he got to go out and enjoy a temporary enclosed area with a swimming pool for his personal pleasure.  He's going through a major moult right now, so he's doing a lot of bathing and preening. 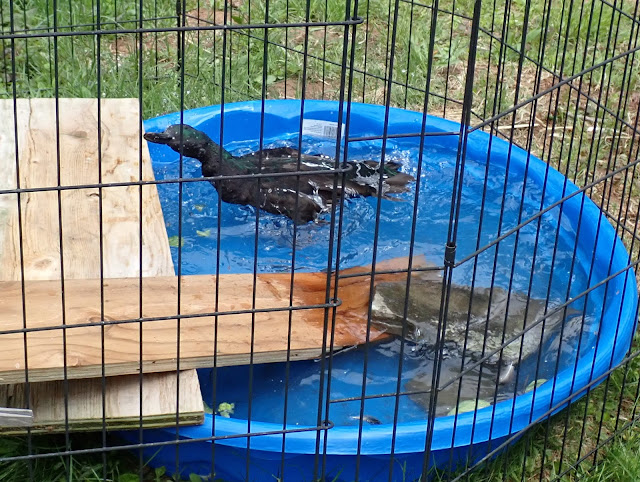 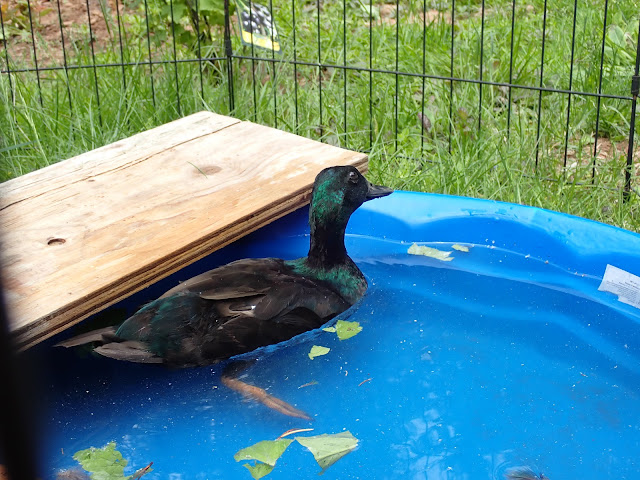 Moth season is in full swing and there have been some fabulous visitors so far.  Yesterday I had an absolutely stunning male luna moth (Actias luna) who was really fresh and undamaged. 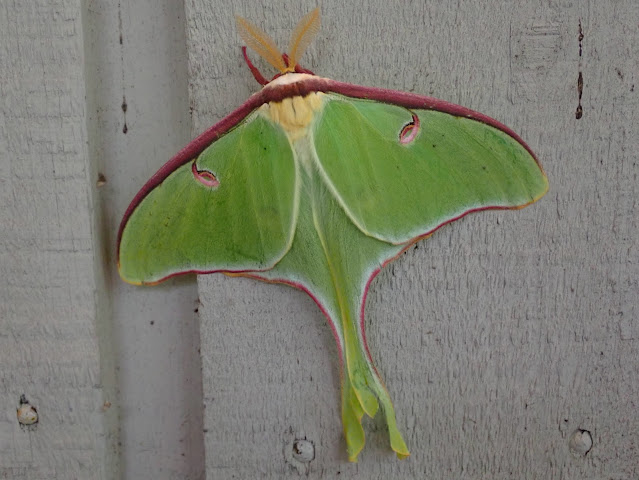 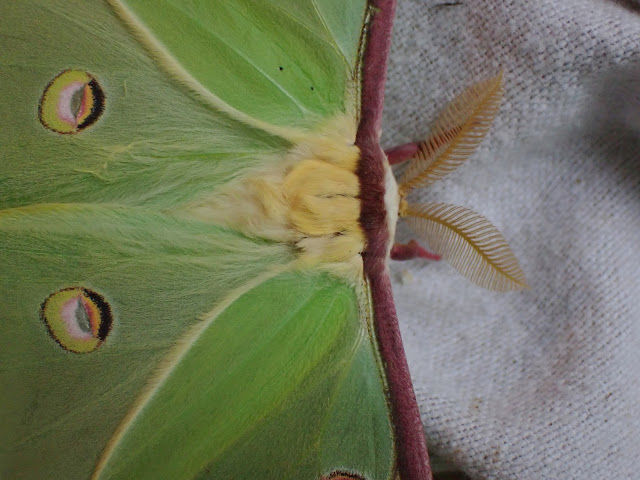 Today I had a modest sphinx (Pachysphinx modesta) - such beautiful hindwings. 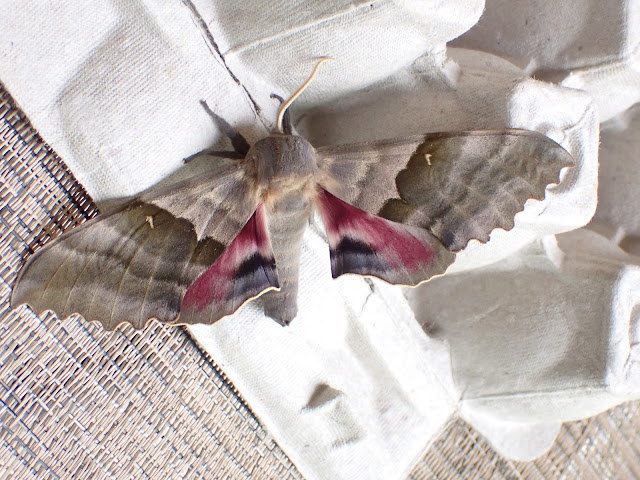 Not a small moth! 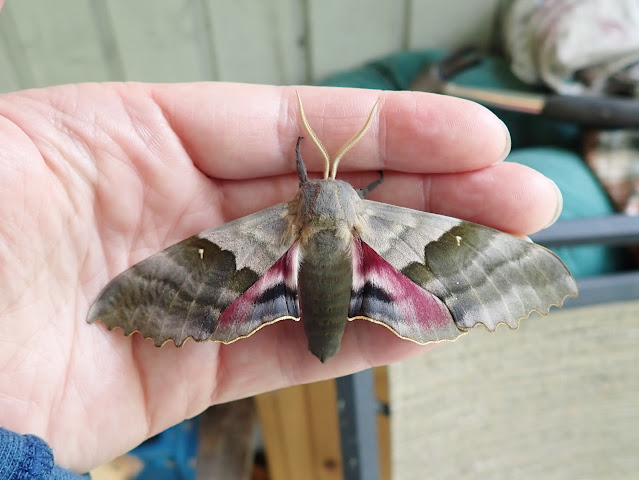 So that's a bit of an update from me - hope things are going well in your part of the world.
Posted by Claire MW at 7:21 PM 4 comments: