Update:  A couple of hours after writing this post, I went out to check on them.  The silkie is gone.  I have no idea what happened.  No sign of her anywhere, no fence breach.  It must have been a hawk or an eagle.  I am really upset - I bought 3 silkie chicks because I really wanted silkies again - and now I have none.  The poor little gold one is really upset too and following me around now.  I feel horrible, I must have put them out too soon.  But they seemed ready.  Ugh.  Farm life can really hurt sometimes.

Remember those little chicks I couldn't resist buying in this post?

Well, as you may recall, sadly, two of them didn't survive, but the one black silkie and the production hen of unknown breed (brown layer) did survive.  Yesterday, I took them out to the coop to join the flock.  Integrating hens into an existing flock can be tricky.  The pecking order needs to be re-established, and the new ones are almost invariably at the bottom.  These two are likely to stay there for a while at least, until they  gain some size.

I put them into the coop in late afternoon, a couple of hours before roosting time.  This gave them a chance to spend some time alone in the coop before the flock returned.  It also meant that they would not be subject to a long day of hassles from the other birds.

They ended up on top of the nesting box (former desk) and I took a couple of flash pictures of them together.  They are bonded with each other and will likely remain close as they get older. 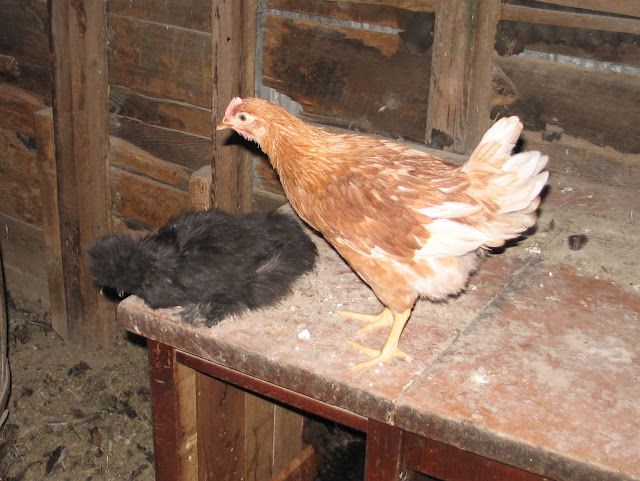 In the nesting unit underneath them, there is a hen sitting on wooden eggs, and she's been sitting for at least 3 weeks now.  I wish she'd hurry up and get over her broody spell!  Unfortunately, others lay eggs in her nest box but she eats the other eggs.  Silly bird. 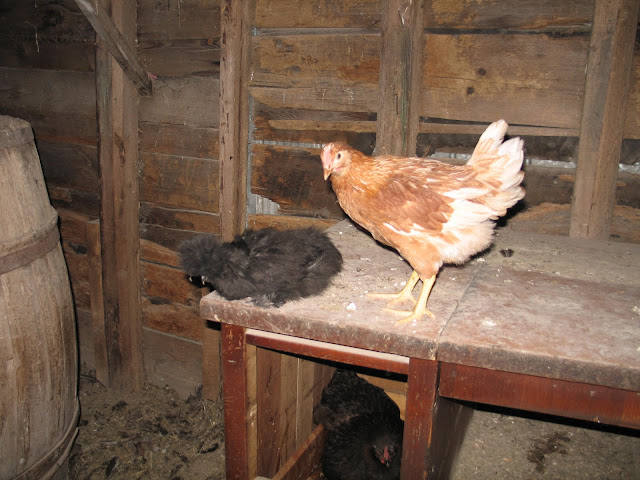 I still don't know exactly what breed of brown-laying production hen I have.  I thought she would be a little darker.  She's really very pretty - a sort of golden brown with light coloured tail feathers.  She may be a Golden Comet or Gold Sex-Linked hen. You can really see that she is quite a bit bigger than the silkie.  The silkie seemed to settle down to roost, but the layer hen was more active even after dark when I went in to take these pictures.  She will figure out the routine soon! 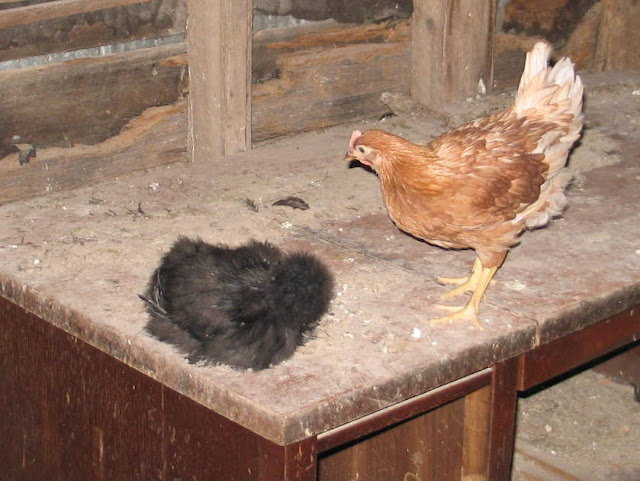 I hope they'll continue to be good friends and that they will integrate into the flock without too much difficulty.  They are a funny little pair but I enjoy adding the diversity to my flock. 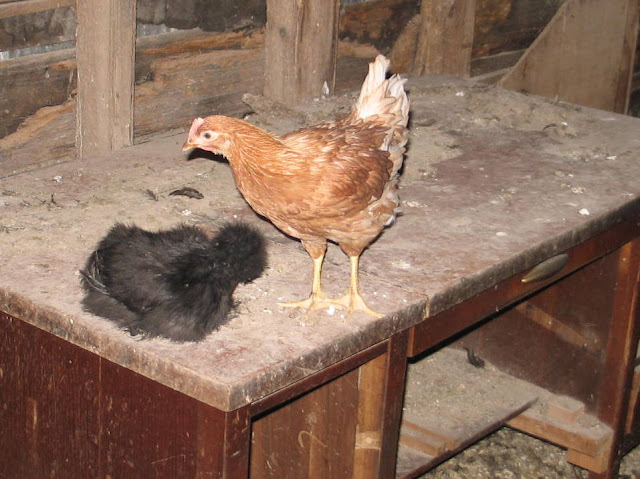 I know, some of you are probably less than excited about moth pictures *again* on the blog, but hey, it's my blog, and I love these moths - both their fabulous diversity and fragile beauty.  It must be "moth season" because every time I leave the porch light on overnight, there are at least a few!

Marigold the goat commented on my last moth post about sphinx moths being the ones who produce those voracious tomato hornworms.  Fortunately, none of these that I've photographed are the specific variety of sphinx moth that produces the tomato hornworm.  That moth is the Five-spotted Hawkmoth (Manduca quinquemaculata).  You can click on that link to see its picture.  So far...I haven't seen any of those, thank goodness!  The ones I've been seeing are primarily moths whose larvae feed on native plants on my land, including apple, poplar and birch trees, as well as marsh and river plants, which are in abundance here.

This newcomer is Paonias excaecata, whose common name is the Blinded Sphinx moth.  It is so named because of the spot on the hind wing, which you can see (because my finger was pushing the forewing aside).  As you can see, it looks like a blue eye, but without a pupil.  Thus, blinded sphinx. 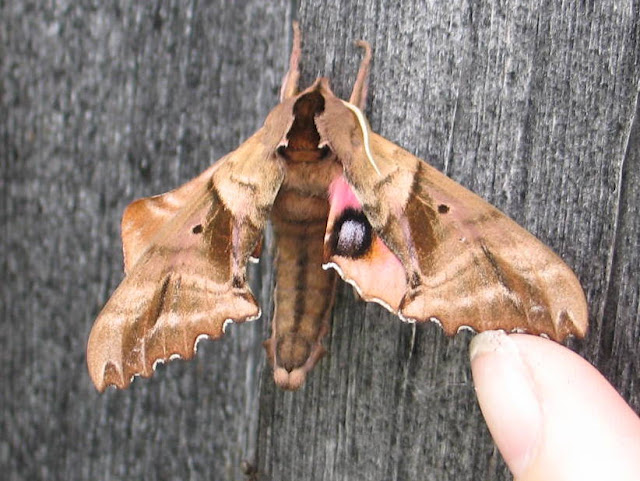 You can compare it with the One-eyed Sphinx moth (Smerinthus cerisyi) which has a "pupil" in the blue spot, as shown below.  Sorry about the shadow in the picture - it's from my porch light and was unavoidable. 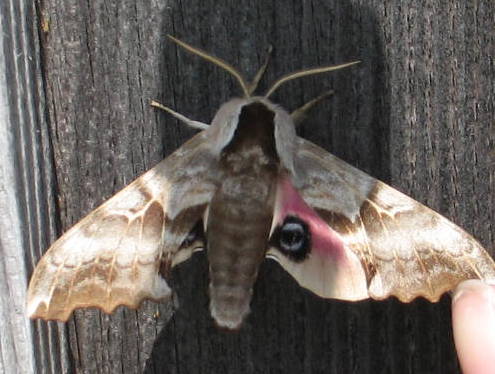 The third one in this group is the Twin-spotted Sphinx (Smerinthus jamaicensis), which has two blue spots separated by a dark stripe.  I managed to take a picture of one of these a couple of days ago, but when I tried to get the eye spot, it flew away, so you'll just have to trust me on the double spot story!  Or, you can see a picture of one here.  This is the one that I phographed - a really stunning moth.  (Sorry about the copyright but I submitted it to a moth photography site that required it and now I can't remove it) 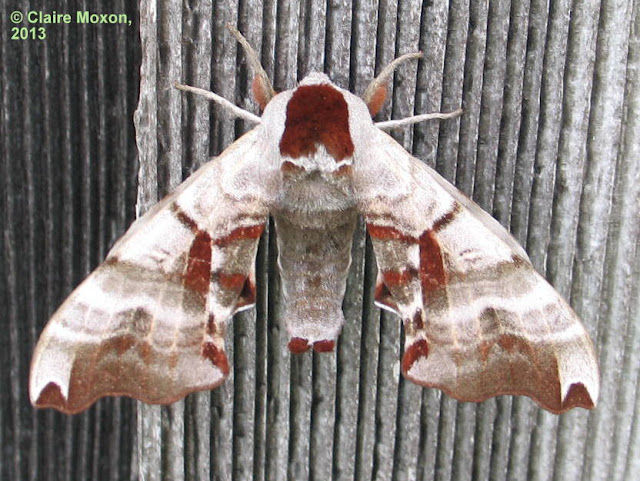 Here is another lovely moth - the Northern Apple Sphinx moth (Sphinx poecila).  I loved the fact that it was on the old red painted wood around the door frame - really made it stand out. 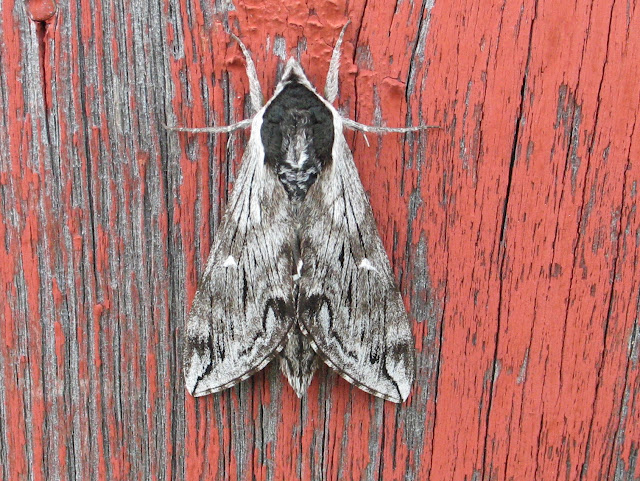 A couple of smaller and more subtle moths were also present.  Here's one that goes by the delightful common name of the Agreeable Tiger Moth (Spilosoma congrua).  I have no idea why it's agreeable, and I'm not sure that I'd want to meet a disagreeable tiger moth.  This one really looks like it's wearing a furry hood, like a sort of winter fairy-robe.  I absolutely wanted to pet it on the head. 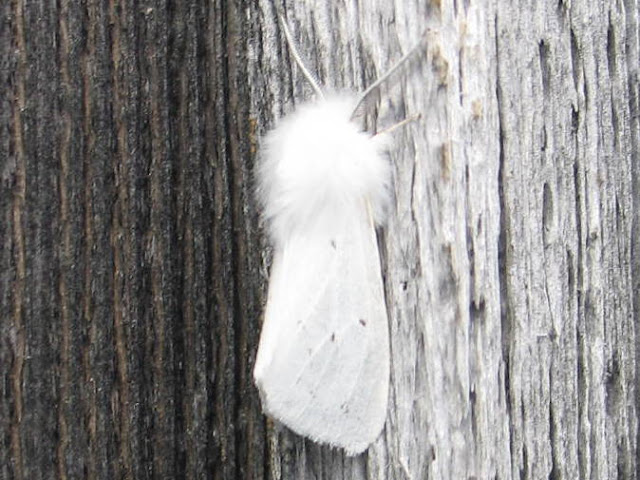 This is a Spotted Tussock moth, also known as a Yellow-spotted Tiger moth. Common names can vary a lot and that's why I prefer the proper Latin taxonomic names, which for this little guy is the lofty Lophocampa maculata. 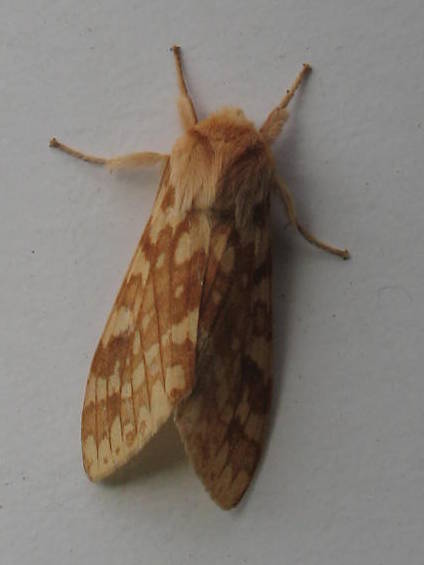 I noticed this little guy in his brown furry hat!  He's a Ruby Tiger moth (Phragmatobia fuliginosa).  I couldn't get a picture of his body, but if you could see it, it would be a deep red colour. 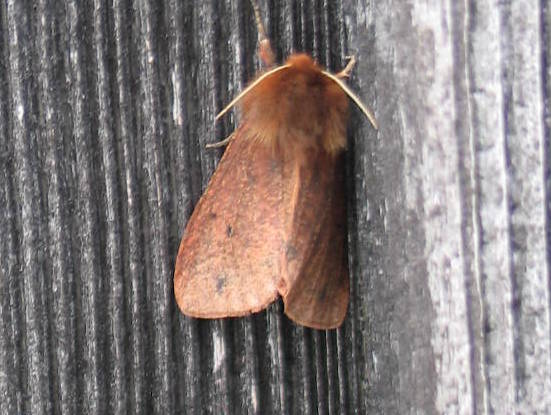 Last but not least, here is the impressively large and beautiful Modest Sphinx moth (Pachysphinx modesta).  I'm not sure why it's modest but perhaps it doesn't show off around the other moths.  So furry! 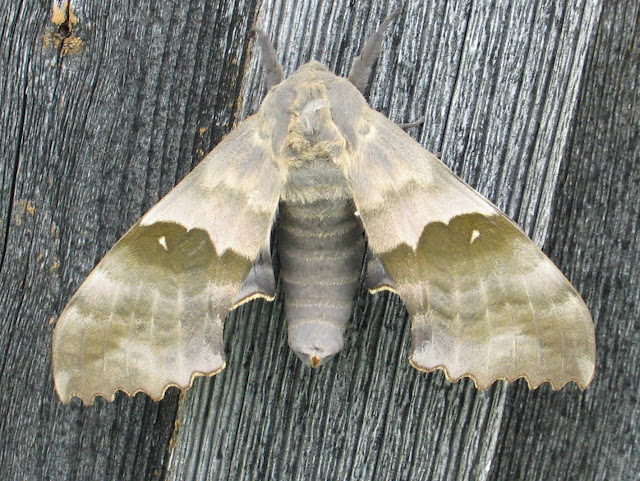 There was some fairly heavy rain during the night, and this morning when I took Jet out for his walk, I noticed quite a few moths on the front wall of my house, presumably where they had sheltered during the rains.  I took some pictures and set about making identifications of these lovely visitors.  I thought I'd share the interesting variety in these Lepidopteran species that make their home in this area.

There were two of these beauties - Twin-spotted Sphinx Moth (Smerinthus jamaicensis). 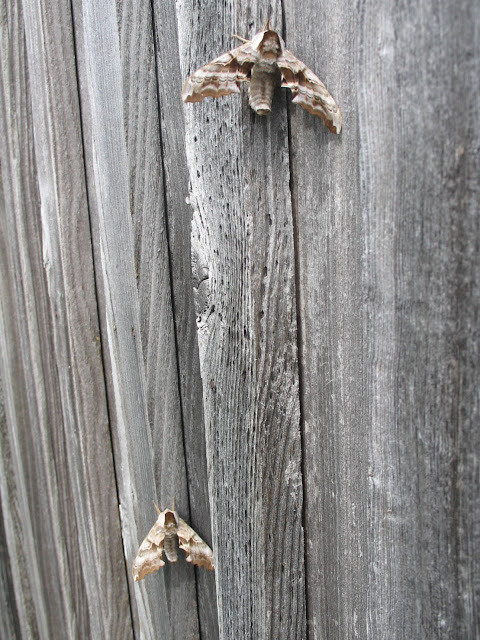 As you'll see in these close-ups, the top one of the two was a little darker than the bottom one, but they are definitely the same species despite the variations in their wing details. 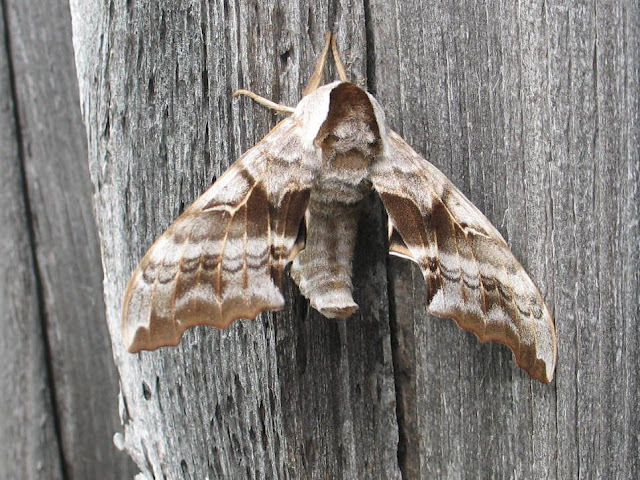 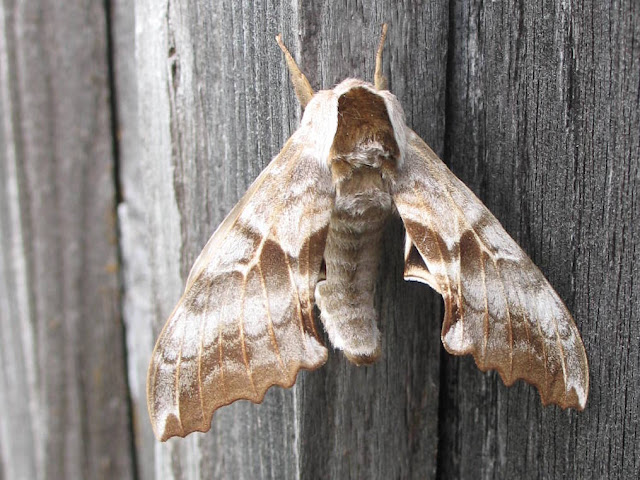 I love how the body of the moth is arched in a sort of S-shape as if it were designed to have a little rider on its back! 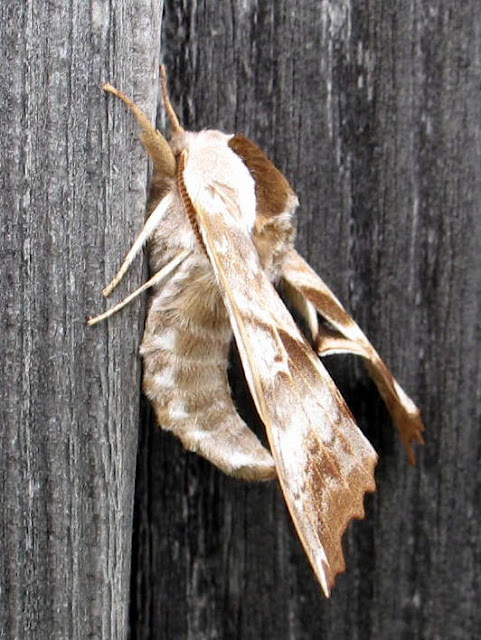 This is the Yellow Slant Line Moth (Tetracis crocallata).  It was sitting on my propane tank, taking a rest. A rather uninspired name choice for its common name, but it does make it easy to identify. 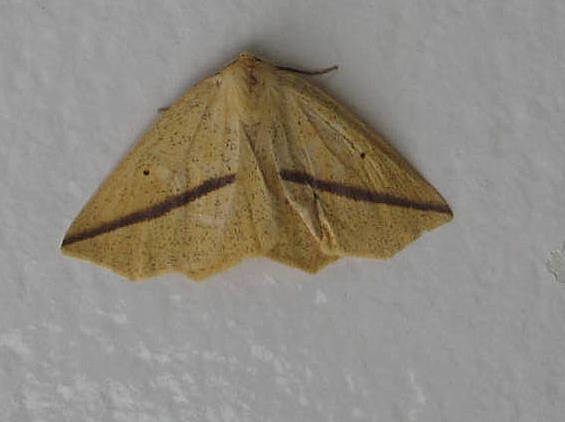 Here's an interesting moth that sort of looks like a curled up dead leaf.  It goes by the name of Sigmoid Prominent (Clostera albosigma), but if you like, call it the curled up dead leaf moth.  If you look closely, you'll see that there's another moth disguising itself against the wood in the picture below.  It's some kind of geometrid moth but I'm not sure what species.  There are over 1,200 geometrid species native to North America, and I don't have the time to positively ID this one! 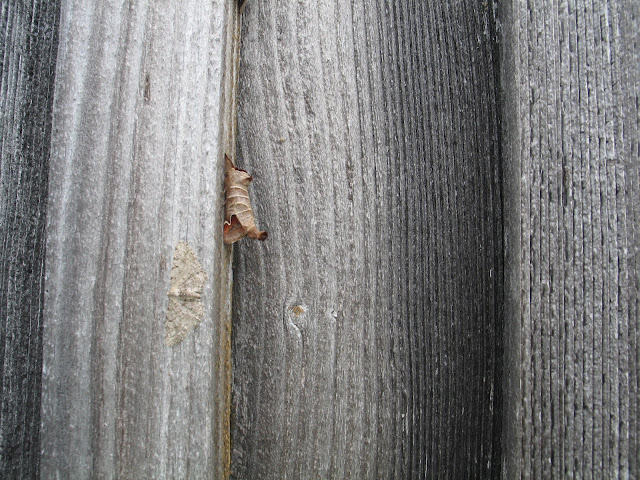 Here's a close up of the Sigmoid Prominent.  You can really see the way it wraps its wings around itself to give it that curled leaf appearance.  I love those fuzzy antennae! 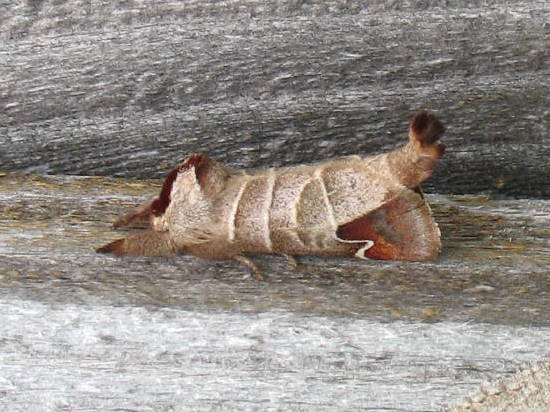 Just above this moth was another interesting species - the Modest Furcula moth (Furcula modesta).  It is also quite easy to spot because of its distinct black markings. 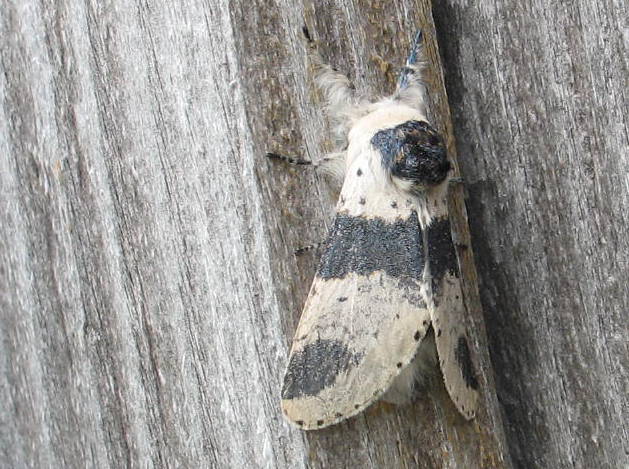 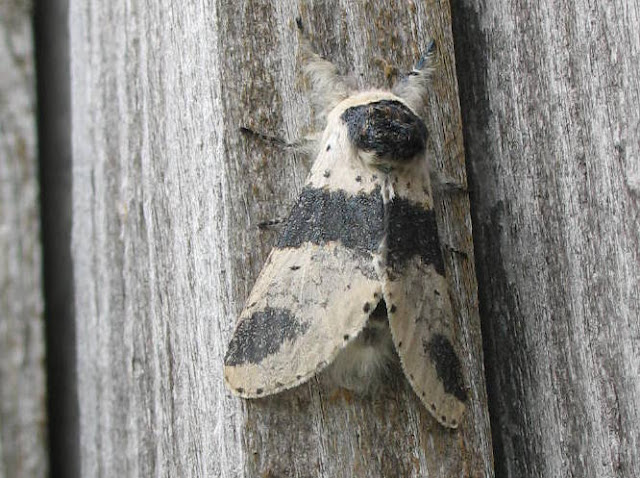 Finally, another moth vying for the prize of looking like a dead leaf.  This one is the American Lappet Moth (Phyllodesma americana).  It reminds me, a little bit, of a furry hedgehog with wings. 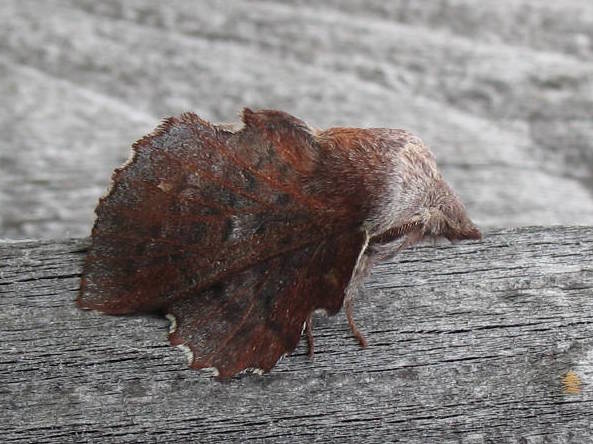 There were also quite a few June bugs on the same wall.  Probably they were the same ones that kept on slamming themselves into the windows last night.  I'm not sure why they don't all get concussions, based on the sound of those thumps every time they hit the window, but somehow they just keep on going! 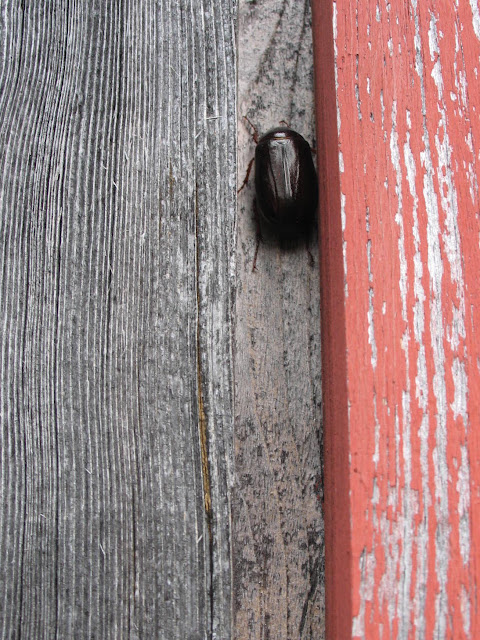