Fall seems to be a busy time of year for me.  Work has been busy, but there have been other things going on as well.  I signed up for some exercise classes this fall, so I've been doing aquacize 2 nights a week at the local university pool.  It's a good class, although I wish that there were more dance moves like the aquacize class I used to take in Moncton.  Still, it's fun and gets me active.  Also, I'm doing line dancing on Monday evenings.  It's not country music, thank goodness, but all sorts of music types, although primarily Latin rhythms.  I'm enjoying that as well.  It's keeping me really busy though.

Also, September and October are busy times for fibre-related events in this part of the world.  I went to Knit East this year, which is a bi-annual event that takes place in St. Andrews by the Sea, a small town in western New Brunswick.  The event occurs at the Algonquin Resort, which is a truly lovely location, and when the weather is fine, it's really enjoyable to stroll the grounds of the hotel and visit the town.  Here's my hedgehog purse (named Ruby) enjoying the sunshine in an Adirondack chair at the hotel. 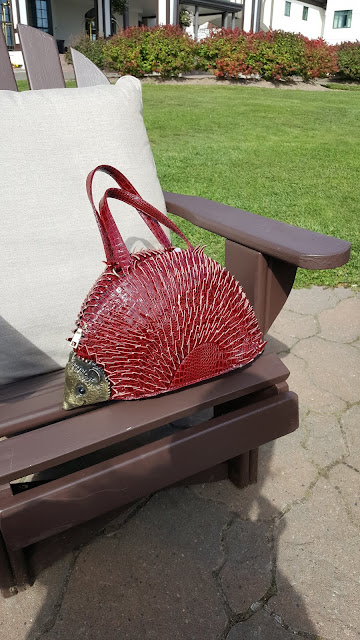 It's the third time I've attended Knit East.  I usually try to make the most of the weekend by signing up for four workshops, which is really the maximum number one can take.  That meant I was in workshops Saturday and Sunday morning and afternoon.  Each workshop is 3 hours long, so it's a busy and learning-filled weekend.

On Saturday morning, I did brioche knitting with Margo Beckwith-Byrne.  I had never done brioche before, but it's not that difficult once you get into the swing of it.  Here's my single colour brioche sample, which isn't very exciting, but I can't find my 2 colour sample at the moment. 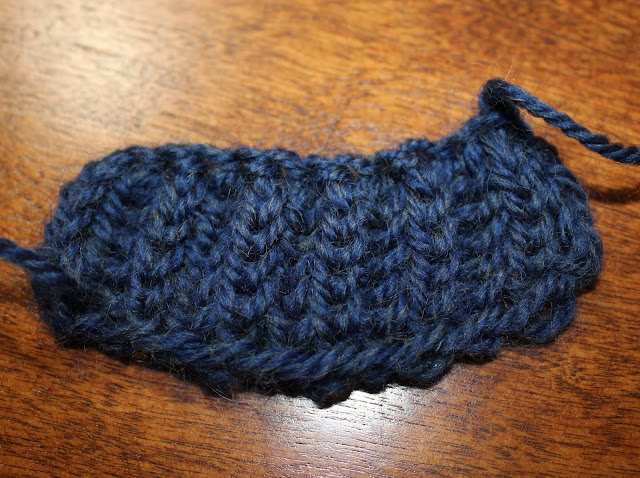 We spent time learning how brioche differs from fisherman's rib and double knit, and did a sample in 2-colour brioche as well.  I'm definitely interested in trying some brioche patterns now.

On Saturday afternoon, I took a class called Hot Sock Tricks with Lucy Neatby.  My mom actually taught Lucy's daughter many years ago, so it was fun for me to meet Lucy and learn what her daughter was doing so I could pass along the news to my mom.  Lucy is an incredible knitter when it comes to colourwork and double knitting.  Her work is just stunning.  Our sock class included some really clever tricks and useful shortcuts in sock knitting.  We did a sample toe and learned a new technique involving grafting (Kitchener stitch) as well as a host of other useful techniques.  Here's my sock toe with the grafted top (in a different colour to make it stand out). 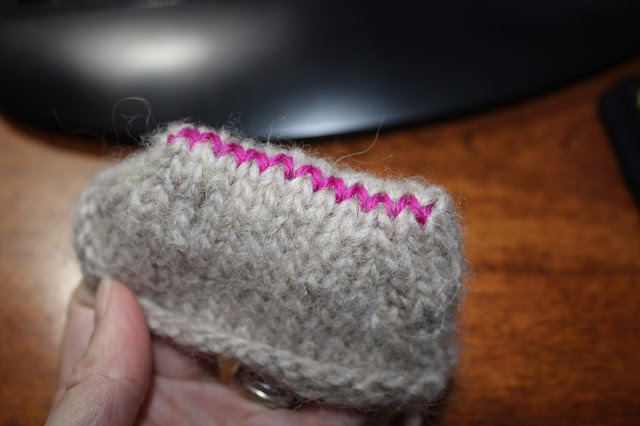 Saturday evening is always the fashion show in which various knitted garments and accessories are modeled, and during which door prizes are awarded.  Many people enjoy going to the show, and I'm no exception to that. 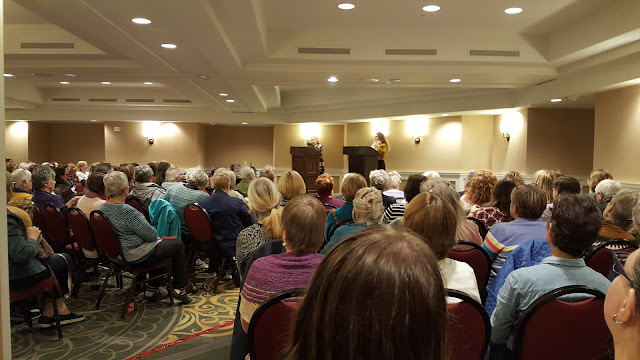 One thing I really like about the show is that they plan ahead what will be shown, so a list is distributed at the beginning, and we can take notes on which patterns we like and would want to consider knitting.  I also was happy to win a door prize - this Sakura cotton skein. 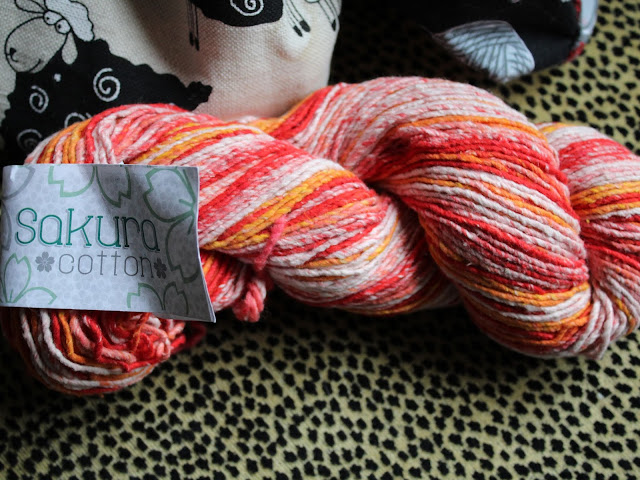 On Sunday morning, I took a class called Knitting Every Which Way with Elizabeth McCarten. I actually follow her blog so it was fun to meet her in person.  She is essentially a queen of seamless sweater knitting, and we learned an awful lot in her class - things that I will need to repeat to really get them into my head.  I don't knit a lot of sweaters, but I have good notes from the class that will help me when I do.  We made a mini knitted vest during the class that taught us the techniques, including double knit pockets and a really clever trick for inserting sleeves.  Here's my mini vest.  I want to finish the other side and see if I can use it as a photo prop for one of the rabbits! 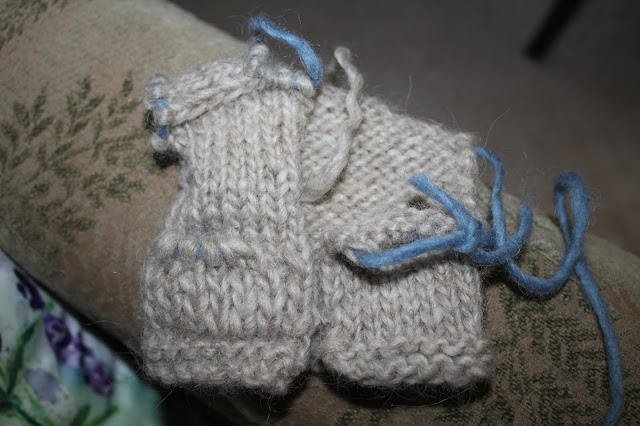 My last class was another one with Lucy Neatby, on the topic of steeking.  If you're not a knitter, you may not know that the term "steek" means to cut through your own knitting, which for many of us is a rather alarming task.  It's done so that we can create knitted tubes (knit in the round) and then cut them open for turning them into cardigans, or it can be used for inserting necklines and other features.  I've never steeked, but I'm a bit more confident about it now.  In that class, we also made a wee knitted sample.  Mine isn't finished yet, but I do plan on finishing it and steeking it, just for the experience. 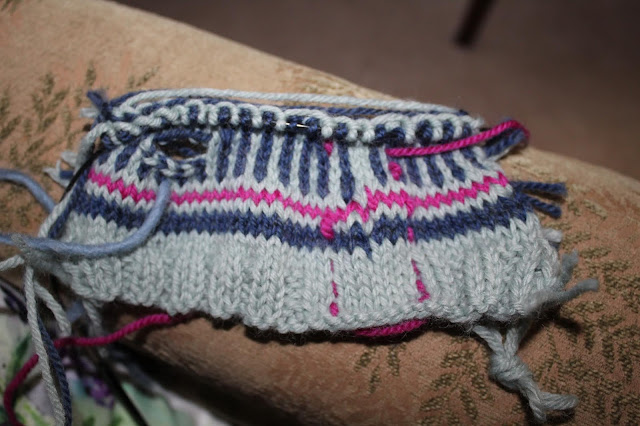 All the classes were great, and I learned a lot.  I also had fun shopping at the vendor marketplace.  Tiggy Winkle, one of our bunnies, was happy to inspect my yarn winnings and purchases. 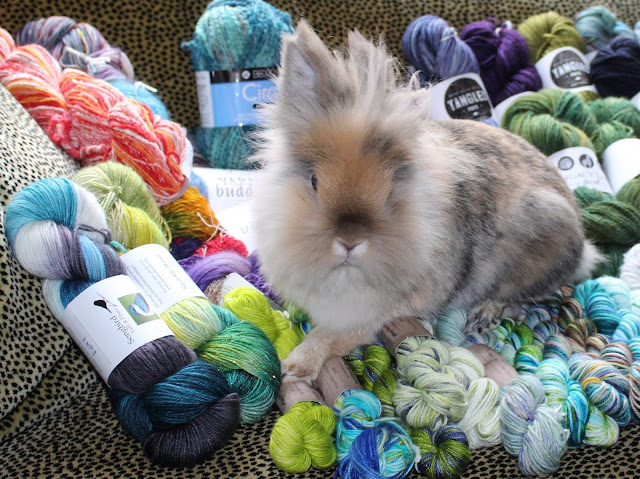 All in all, a lovely weekend.  Of course, then coming back for a regular work week is challenging because all the things I would normally do on a weekend didn't get done, and it's a scramble to get caught up, especially with my exercise evening commitments.  This coming weekend is Canadian Thanksgiving, so that gives me a little break.  I won't really be celebrating it, but I'll see my parents at the end of the month to celebrate both of their October birthdays.  Next weekend I'll be in Prince Edward Island for the annual Maritime Handspinner's Retreat.  So, as I said, busy days!

Speaking of Prince Edward Island, I collaborated with the women who run Fleece and Harmony yarn store and sheep farm on a little Thanksgiving story about their sheep.  I wrote the story, and their neighbour, who is an illustrator, made some adorable illustrations for it. 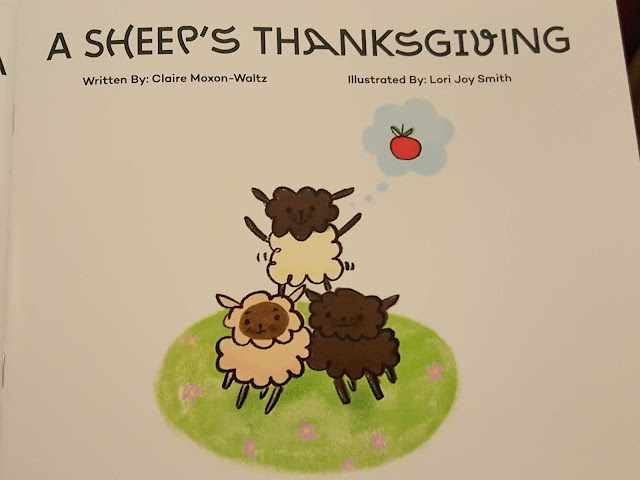 They had the book printed up, and when I was at Knit East, I was able to get a copy for myself.  They had quite a stack of copies, and when I was at the booth looking at the book sample, they mentioned to a couple of shoppers that I was the author.  That, very unexpectedly, led to those shoppers asking me to sign a book for them! 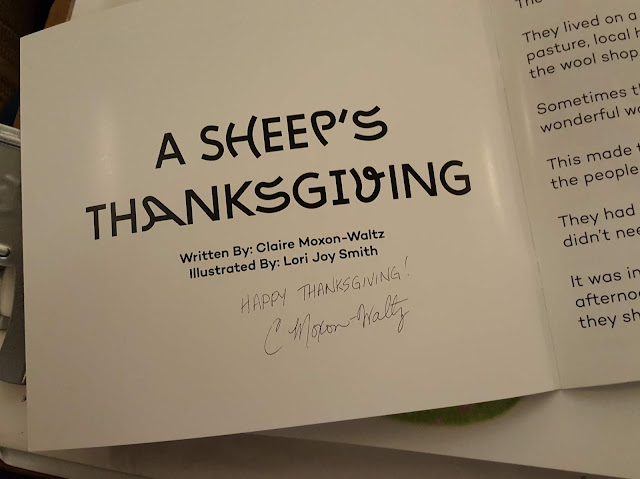 So, I spent time later Friday evening signing the rest of the copies of the book.  Here is the finished stack of signed books!  I hope everybody who bought one enjoys the story! 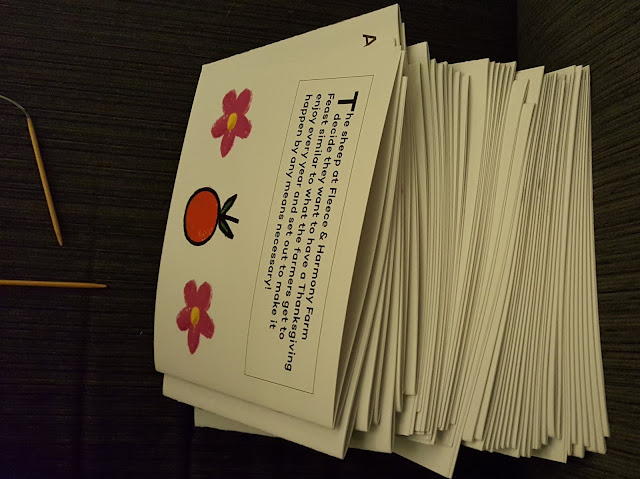