Unfortunately, I missed Friday's Hunt last week.  I was away at the Knit East conference, which is a bi-annual knitting event that takes place in the lovely town of St. Andrews-by-the-Sea in western New Brunswick.  I didn't take a computer with me because I wanted to dedicate my time to my knitting workshops and enjoying the break.  By the time I got home, it was after the deadline for joining.  But, I'm back in the swing this week.

The prompts from Eden Hills are: Starts with Q, Orange, and Animal.

Starts with Q
The town where the knitting conference took place is very small, but it has a number of quaint homes in it.  This is one of my favourites. 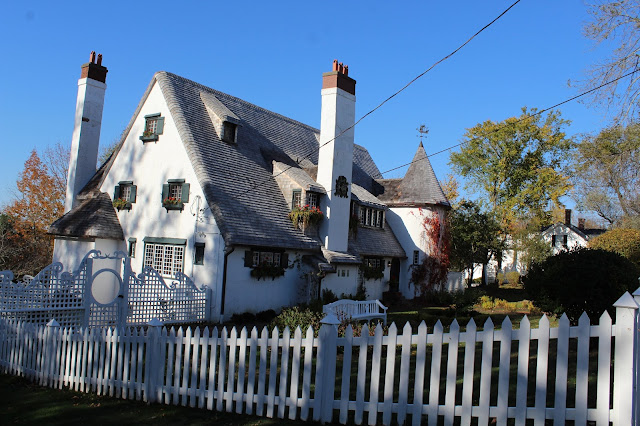 It looks like a sort of fairytale cottage - I love the curve on the edge of the roof and I adore the little turret out the front.  The fence detail along the side of the house is also rather quaint.

Orange
The fall colours are nearly finished here, but there was still some lovely fall foliage last weekend, including red, yellow and of course, orange leaves.  This was the view as I walked down to the main street to look around. 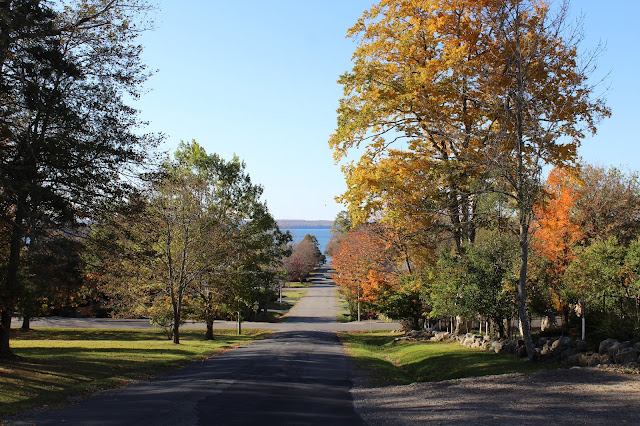 There is a cute little gift shop on the town's main street, which is called The Whale Store.  It had an orange chair sitting out the front, and as you can see, it has a lovely art piece mounted on the front of the store just behind that orange chair. 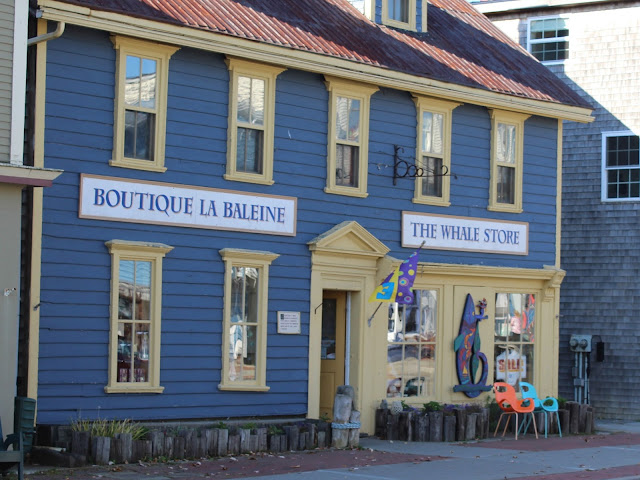 Lots of orange on the fish on this delightful piece of art! 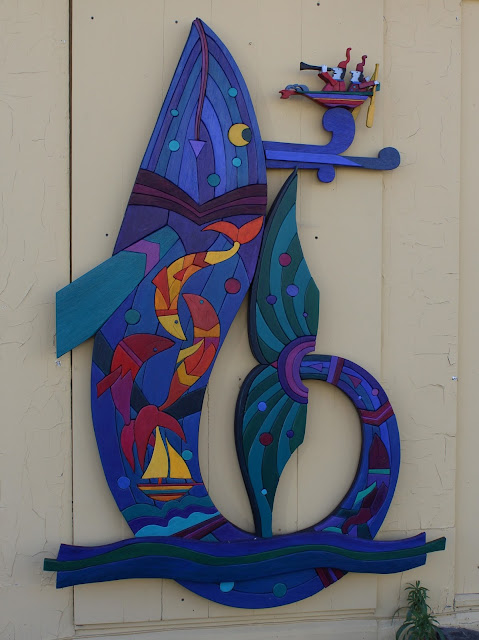 Animal
The whale probably qualifies as an animal, seeing as it is a mammal, but I would also like to share this interesting metal sculpture of a horse that was in the grounds of the hotel where the knitting conference took place.  It has a leather tail and mane. 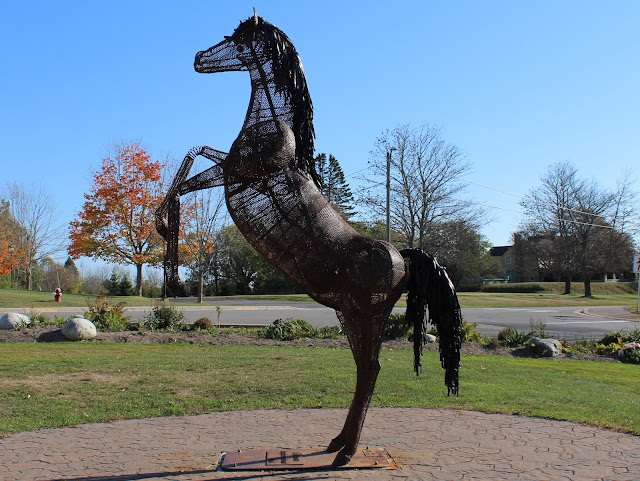 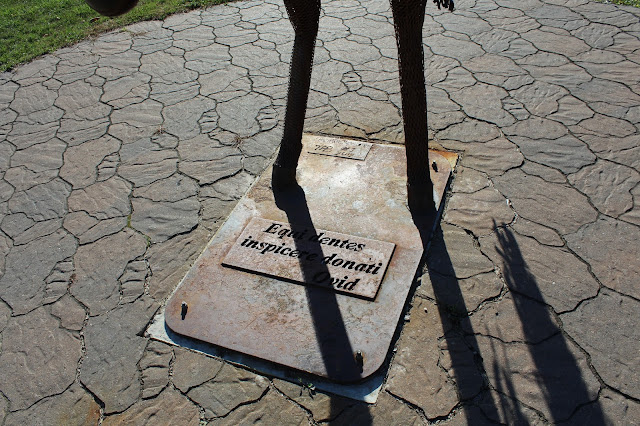 I was very lucky to have such superb weather for my weekend away, and I think the horse was enjoying the sun almost as much as I was!  I was able to sit outside on the hotel deck and knit, which is extremely unusual for October here.  Two years ago at this conference, it was terribly cold, damp and not at all a good time to be outside.  I was delighted at the unseasonably warm weather this year. 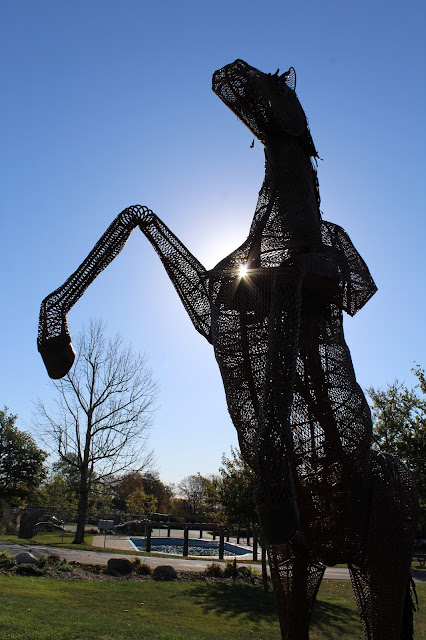 Time for Friday's Hunt after a busy week, but I'm managing to actually do it on a Friday.  I missed visiting the other participants last week but will try to visit everybody this week and comment on the posts I missed last week.

The prompts for this week are:  Starts with O, Purple, and City/Town.

Starts with O
Orange starts with O.  This week, the rabbits have been eating a pumpkin that I bought.  The outside of a pumpkin is a very bright orange, and the inside is also orange, but a lighter shade.  The sheep also like pumpkin, so I really bought the pumpkins for them, but the rabbits ate almost an entire pumpkin before I managed to find the time to chop up the second one for the sheep.

Here's how it started - some innocent nibbles on the outer orange pumpkin skin.  No, the decorative mouse wasn't responsible! 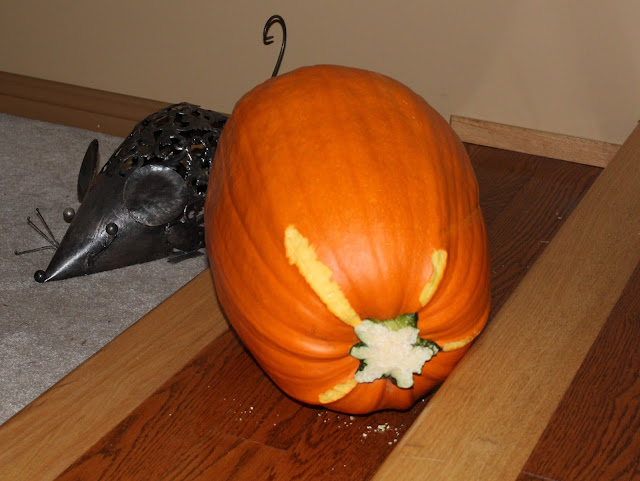 Pretty soon, we had this situation... 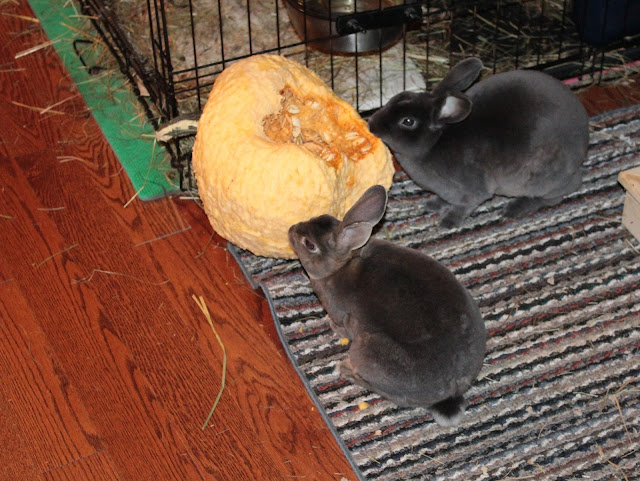 ...after which there were just a few seeds left.  No more pumpkin needed for those bunnies! 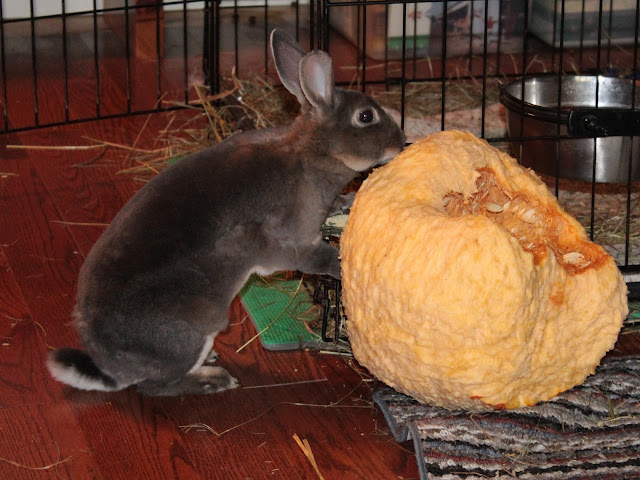 A bonus orange item - here's a jar of the 3-citrus ginger zucchini marmalade I made for my Dad for his birthday.  It came out very well and he gave it the thumbs up on a taste test! 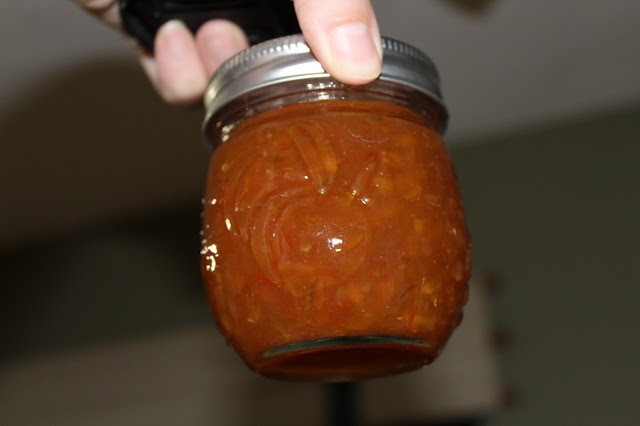 Purple
This one was a bit tricky for me - I don't have a lot of purple things to photograph.  I noticed that I do not have many spools of purple thread on my thread rack (at least not compared to other colours). 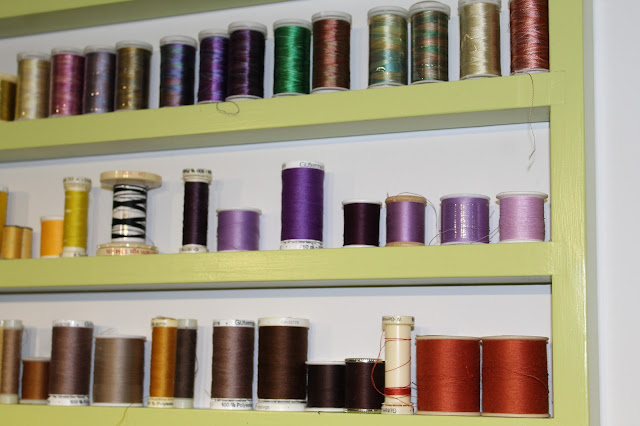 I have some fabric in my stash that includes purple tones - I haven't decided what this fabric will be yet, but I love the colours and patterns in it. 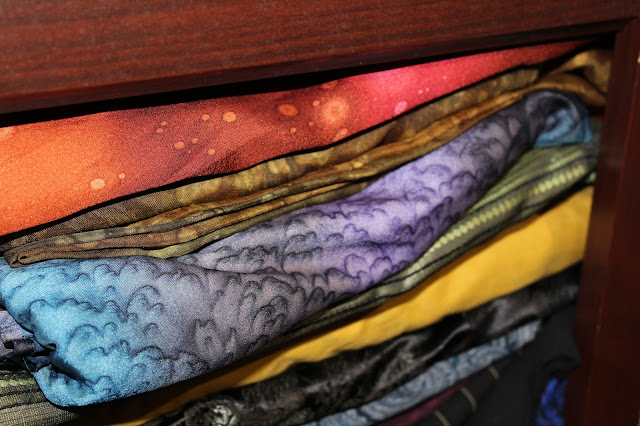 Here's a crochet project that is currently on hiatus while I work on some other items, but it has some touches of purple in it. 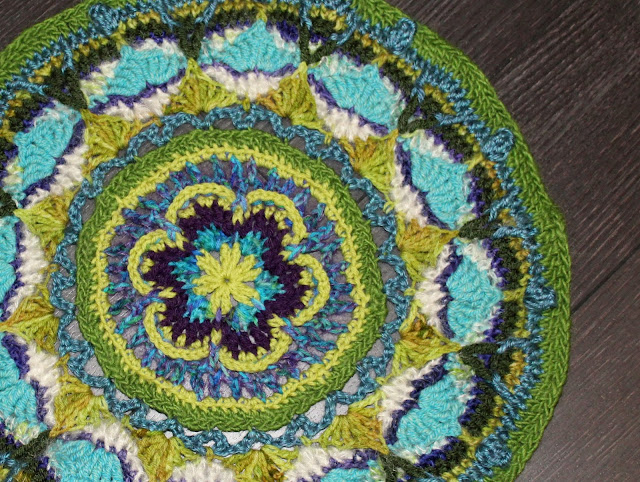 City/Town
I was born in a large city - Montreal, in the province of Quebec, Canada.  The population of Montreal is almost 1.75 million.  At about age 5, I moved to Scarborough, which used to be its own city, but now it is an administrative district of the city of Toronto, Ontario.  Toronto has about 2.8 million residents.  When I was about 10, we moved to Halifax, in the province of Nova Scotia.  It's a smaller city, at about 415,000 residents in the greater metropolitan area.

It wasn't until my mid 20's that I moved to a smaller town - Truro, Nova Scotia, in order to attend the Nova Scotia Agricultural College.  Truro is a town of about 12,300 residents.  That was the smallest place I'd ever lived to that point in my life, which I thought I would really dislike, but I found something charming about being able to drive around and see fields full of cows and sheep.  As I've grown older, I have come to truly appreciate living in a more rural setting.

I now live on the outskirts of a town of about 5,500 residents.  I love visiting a large city to take in the sights, enjoy the cuisine options and partake of the cultural life, but I am very content to live in a rural setting.  I listen to birds, not traffic and sirens.  I breathe clean air, not smog and exhaust from traffic jams.  I can enjoy the freedom to have sheep, goats, and chickens on my property.  I can see more stars on a clear night than most city dwellers ever see.  I hear the unmistakable haunting cry of the loon on the nearby lake, and the hoots of owls as the sun goes down.  I smell the tang of freshly cut hay on the air, or the fragrance of the pine and spruce trees surrounding my home.  I belong in this setting - going back to live in a city would make me feel cramped and stressed.  Here's a view from one of my recent walks around the streets where I live.  I think you can see it's not city life, but it's a great life for me. 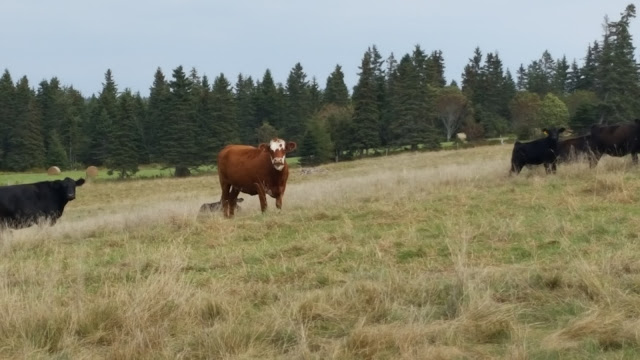 I've had a lovely visit from my parents this weekend and nearly forgot to blog Friday's Hunt.

Super quick - only 10 minutes to the deadline!

Starts with N
Totally lost on N and I only have a few minutes.  New starts with N.  Here is a new house I crocheted for our pet rats this week.  They seem to love it.  In a way, it is kind of like a nest. 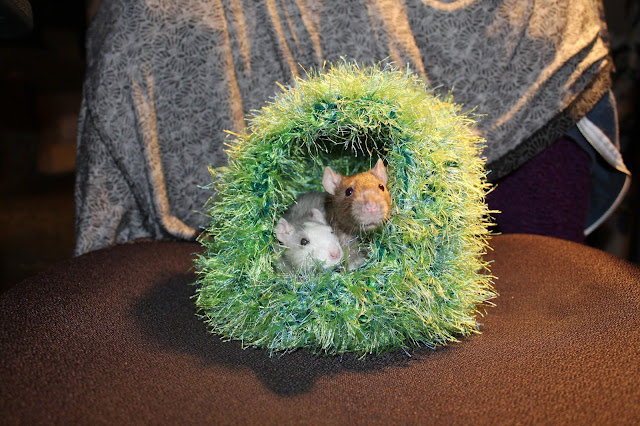 Sky
I took a picture of a lovely sky earlier this week - the fall weather has been lovely and I enjoy the blue skies and the beautiful fall leaf colours.  In this shot you can just see some red maple leaves in the upper left. I like the little rainbow effect that happened as a result of taking the picture with the sun in it.  It's just an artifact of the camera - it wasn't in the sky. 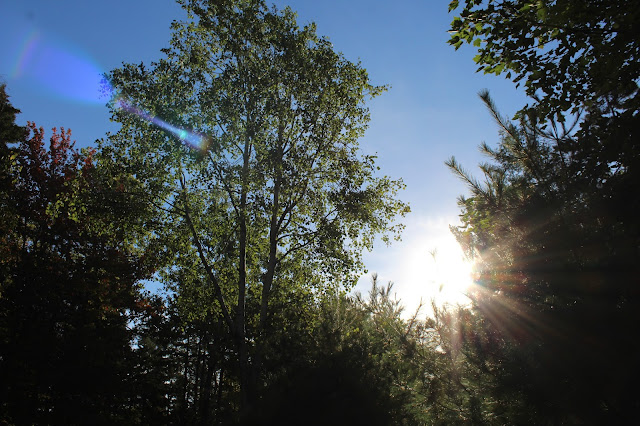 Silhouette
I had trouble finding a good silhouette pictures, so I ended up doing a maple leaf silhouette in the evening sky last night. 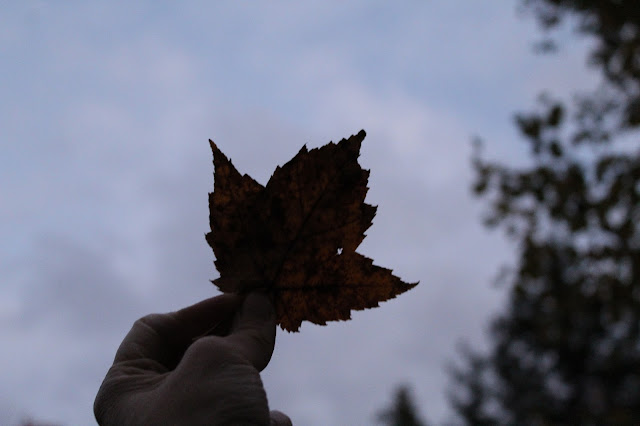