What is that thing in the barn?!

I've had trouble with predators lately, having lost a few roosters, and I've been monitoring carefully for signs of them lately. This morning when I went out to do my morning feedings and check-ins with the critters, I had a bit of a surprise.   What....the heck....is THAT?  The box structure was used for housing one of the free ranging roosters to keep it safe from raccoons at night, since it would not roost with the others in the coop.  But under the box....there was a fuzzy thing... 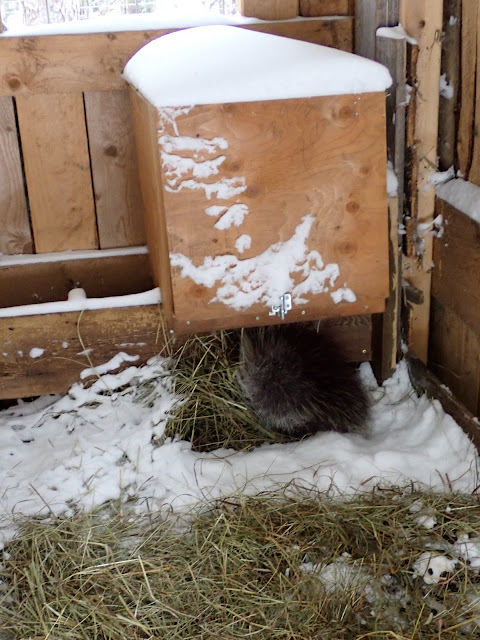 I don't usually do videos.  Today is an exception.

After that, I went back to the house to find a broom to see if I could encourage my visitor to depart. Apologies for my poor video skills.

Success....somebody needed to be relocated.  Not very far....just out of the barn! 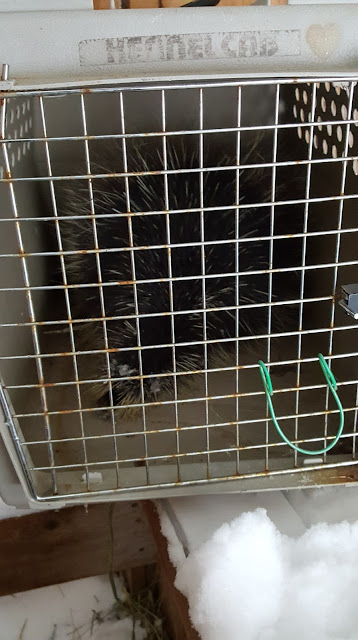 Even though it was very little, it was quite intimidating, and I didn't want to mess with the spines.  You can see how it likes to hide its head and just display the spiny back end. 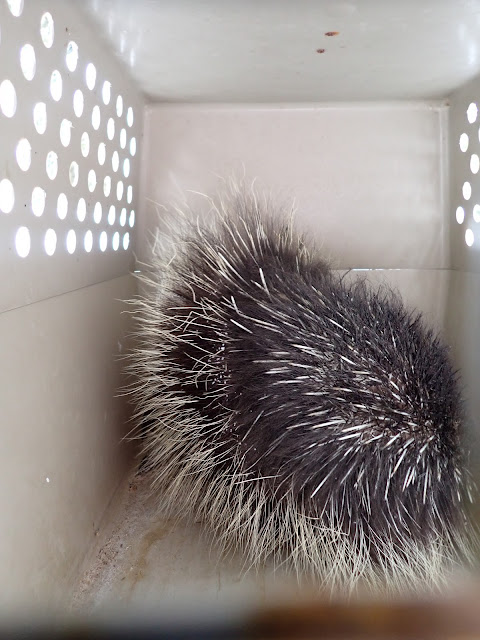 But it did have a super cute little face! 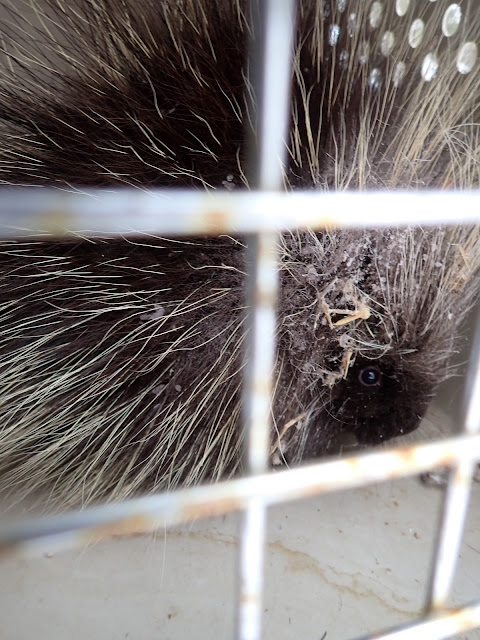 I carried the crate around to the front of the house where I could easily access some trees in spite of our heavy snow at the moment. 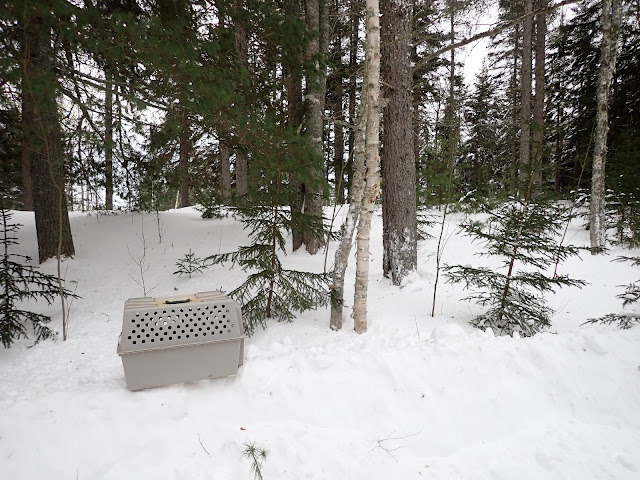 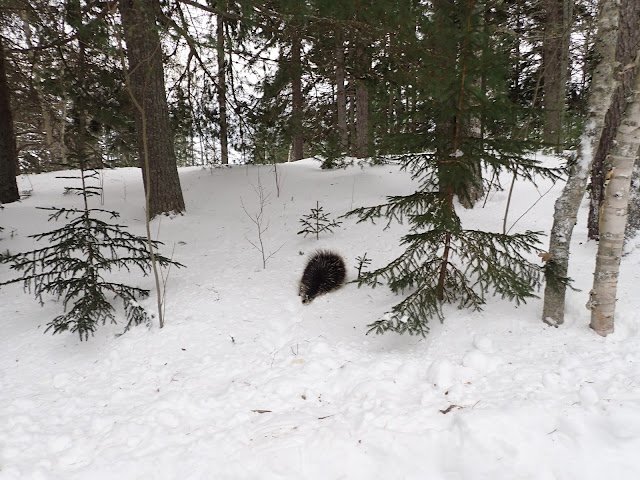 As soon as I released it, it had a mind about where to go. 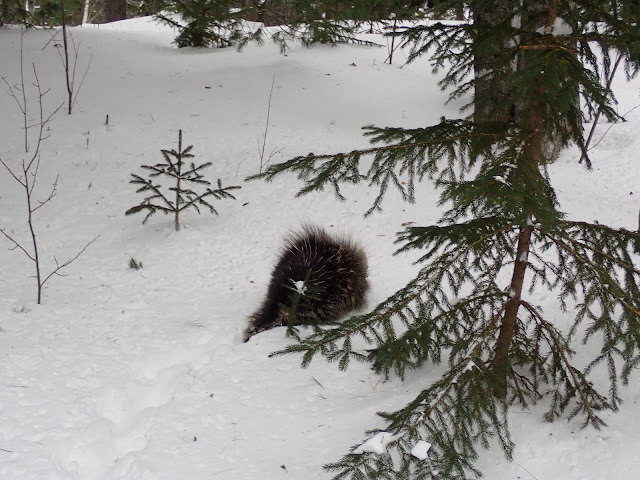 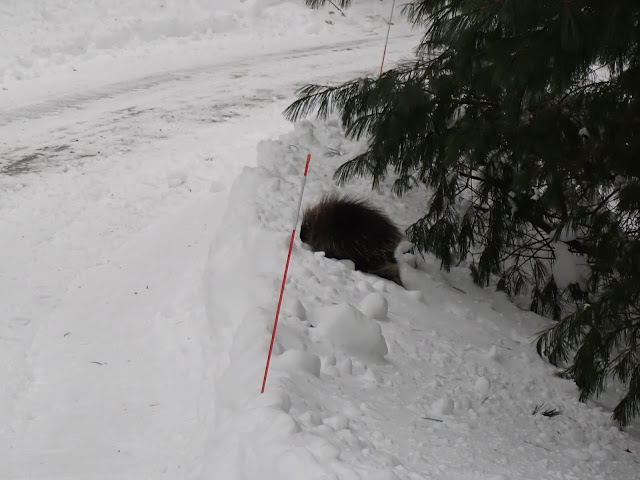 Eventually, it went up the tree to relax after its adventure. 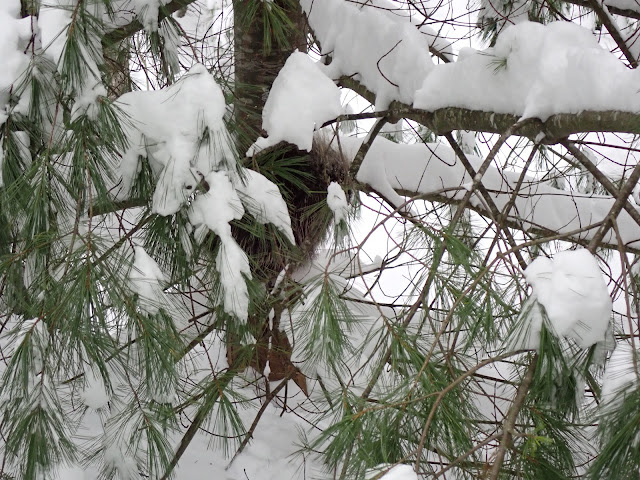 We have so much snow right now.  It's a bit ridiculous.  I think the porcupine just got into the sheep and goat area and didn't know how to get out, and was just trying to rest for the day. 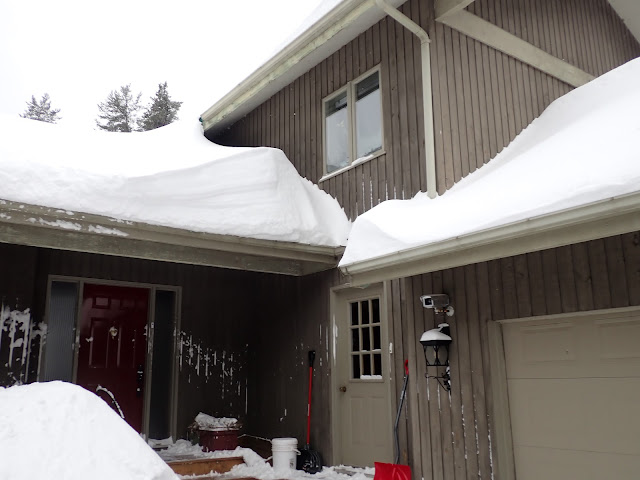 I went out to check a little while later and it was still in the tree. 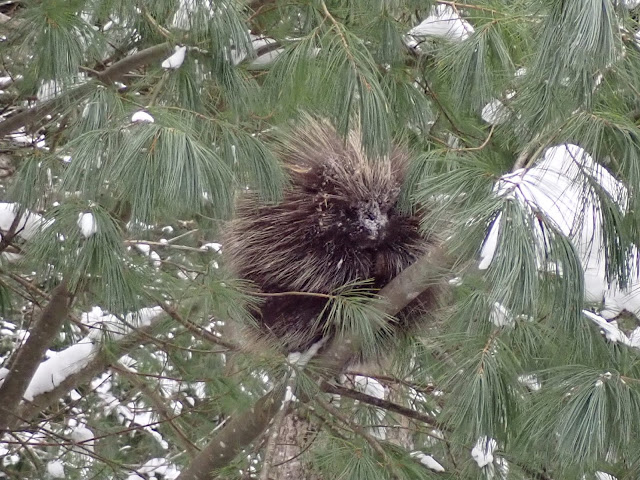 I hope it finds a good place to get some food and rest. 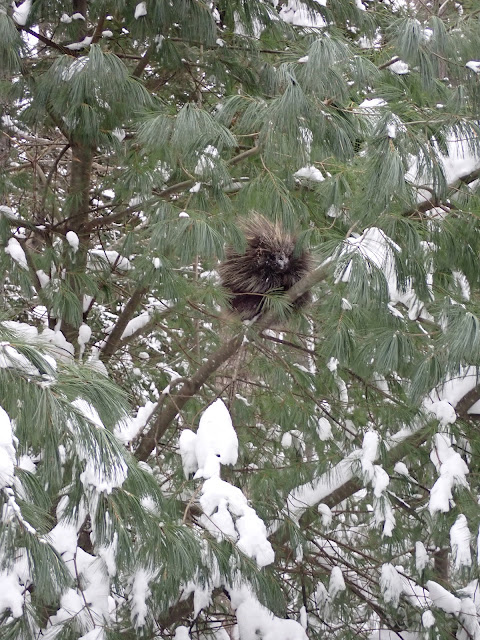 After a relatively mild December, January has now reminded us that it is definitely winter.  The first major snowstorm for my area came on Friday morning, and lasted until sometime overnight on Friday, leaving a considerable snowfall total in my yard.  I used a measuring stick in several spots and the average was 46 cm, or about 18 inches of snow, which is quite a bit for a single storm.  Here's how things looked on the driveway this morning. 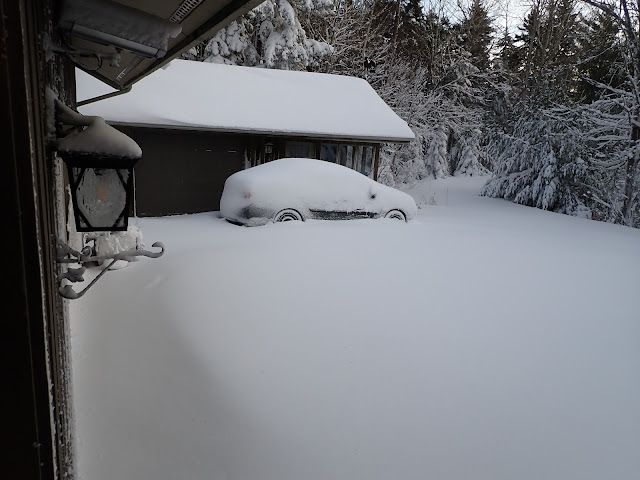 And here's the view out the back porch door towards the rabbit palace. 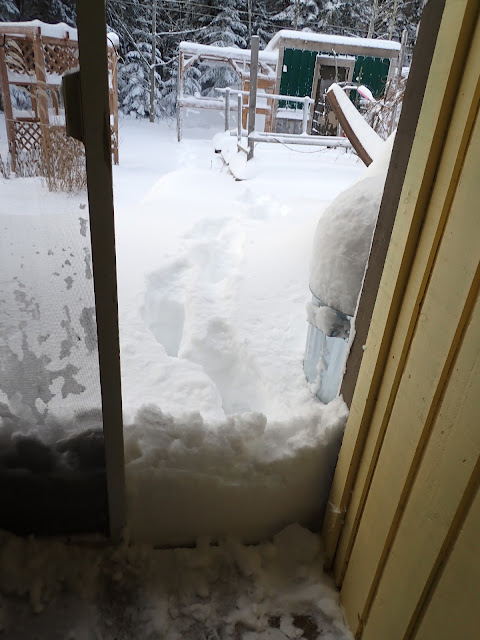 It is definitely enough snow for me to try out my new cross country skis soon.  But I didn't go today, because I figured everybody would be out there today, since we haven't had enough snow to ski on yet this winter. 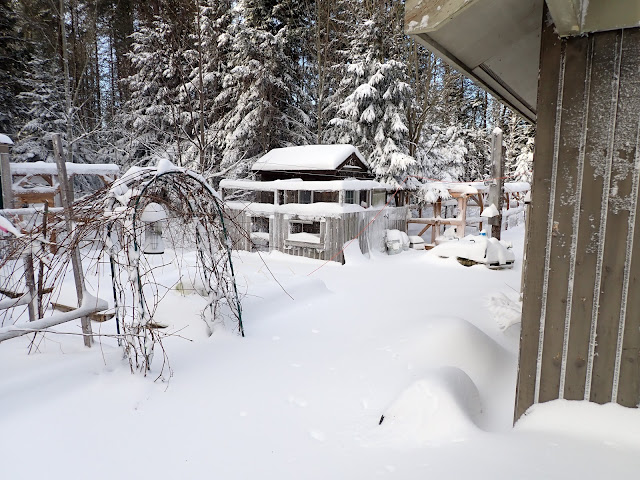 Fortunately, I have a reliable snowplowing service that came to do the driveway. It didn't take him very long to get most of it cleared, although I still spent a long time cleaning off Marc's car while he used our little snowblower to make paths in the backyard. 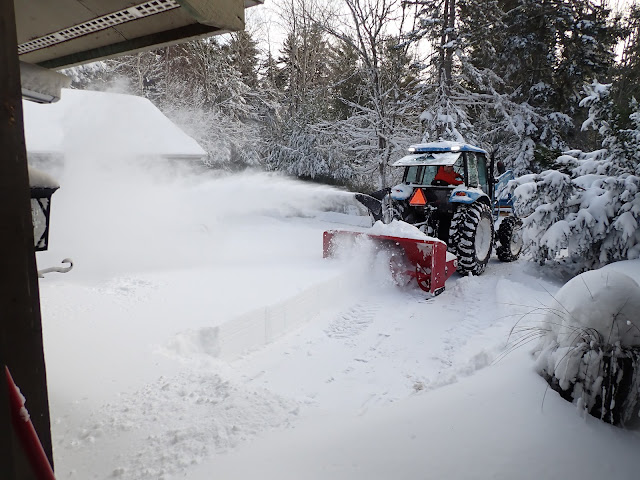 It is so much easier to access all the animals when there are paths in the yard. 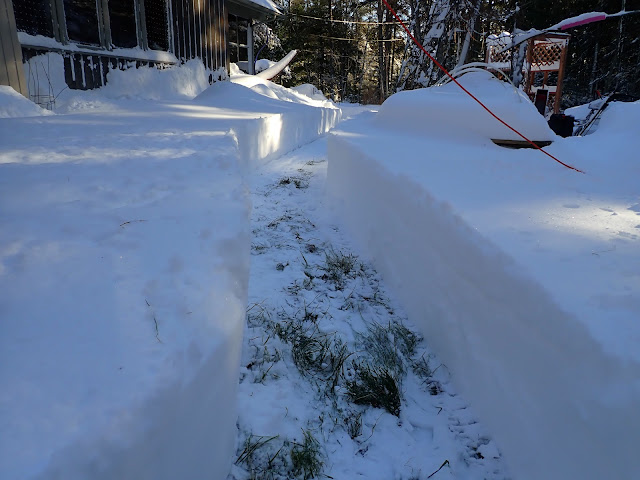 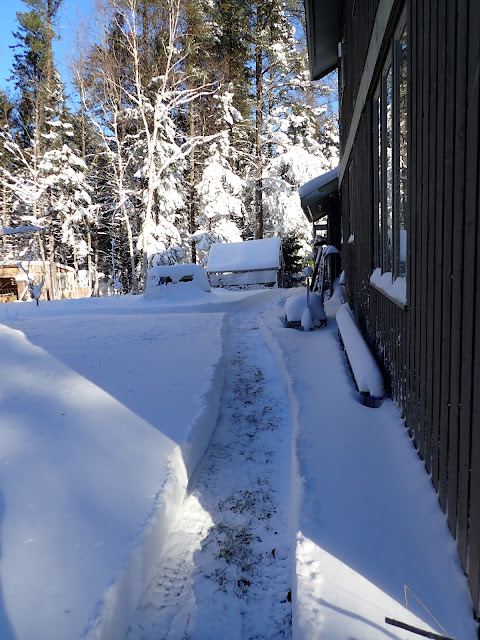 I'll have to make a few paths of my own to get to the bird feeders though! 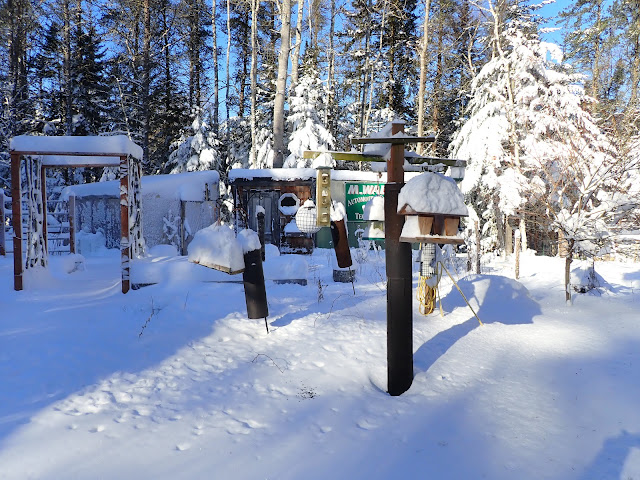 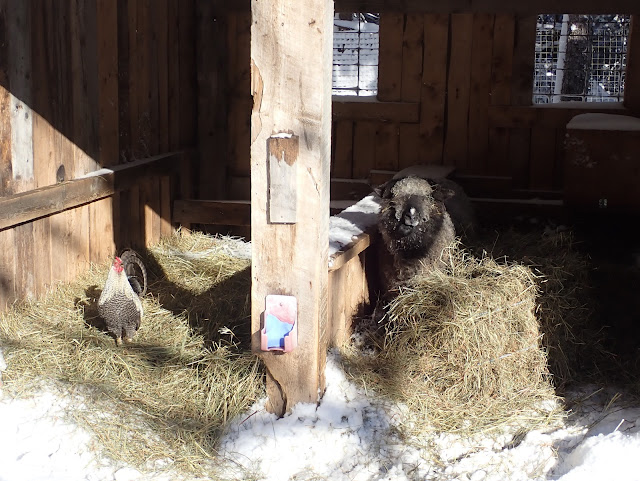 Lucky Nickel came out to eat the pieces of pine tree that broke during the driveway plowing - it's difficult for the plowing guy not to damage any trees when the boughs are so heavy with snow, so I brought all the pieces over to her for snacking. 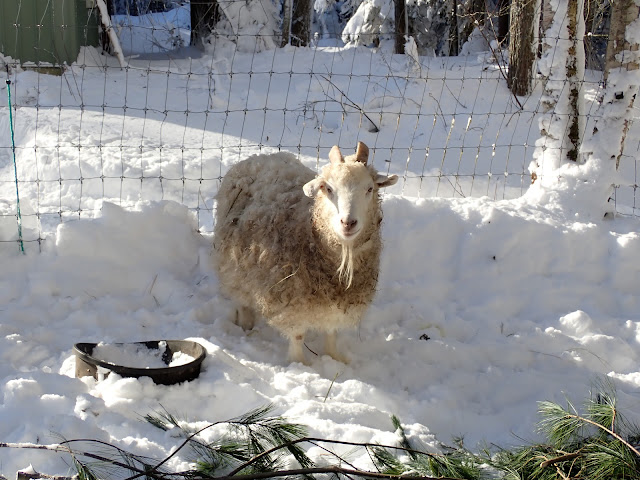 It's a good thing I don't have any chickens living in the Eglu right now! 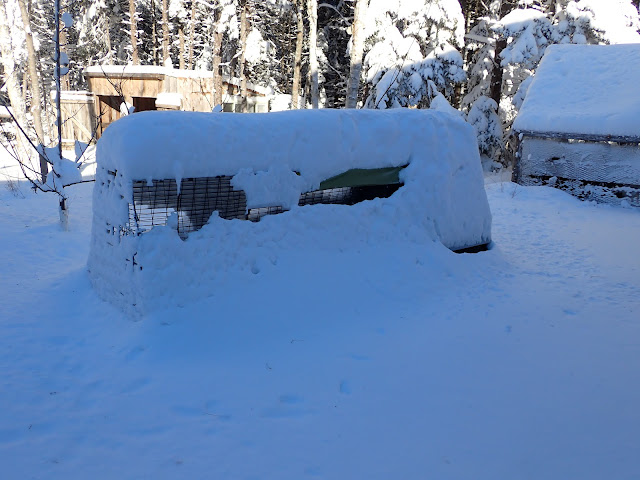 The duck house was well covered in snow. 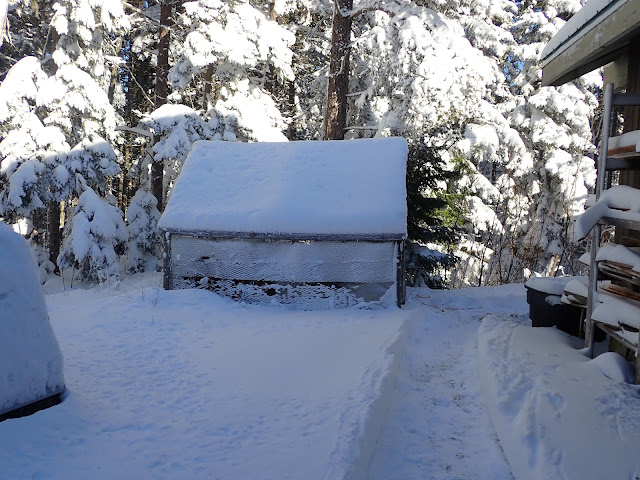 Sir Francis was happy in his kiddie pool though!  The immersion heater keeps it from freezing. 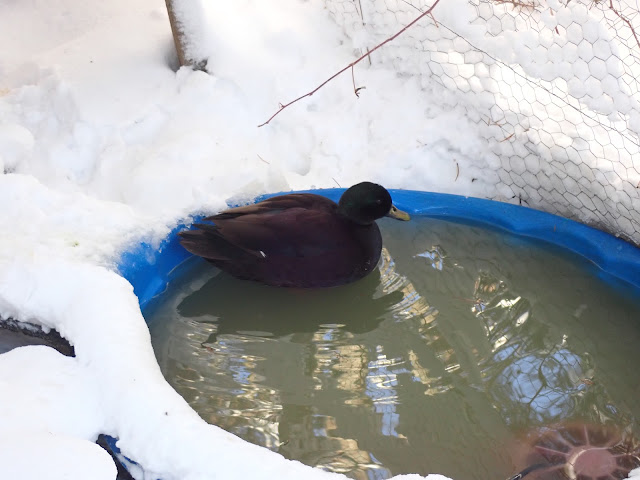 I definitely need to do some major pruning of the yew shrubs this spring.  I'm thinking about trying to do the pom-pom style topiary with them. 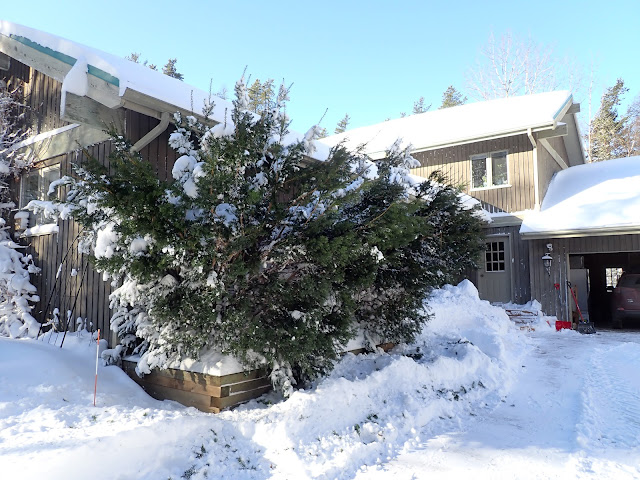 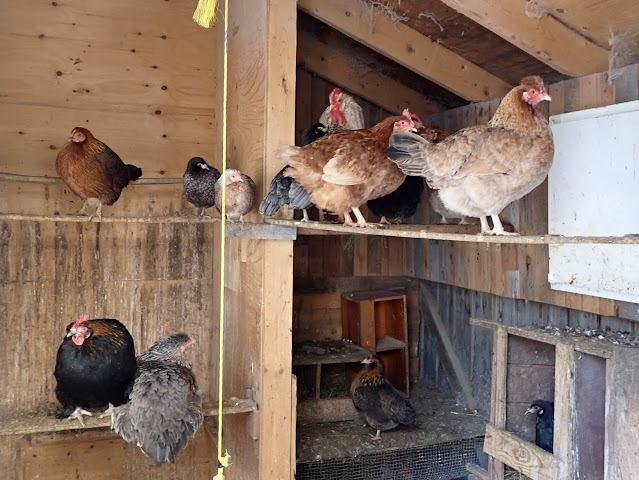 I don't blame them!  It will be a long time now before they will want to go out into the side yard.  They don't really like standing around in the snow.  I wouldn't want to do so in bare feet either! 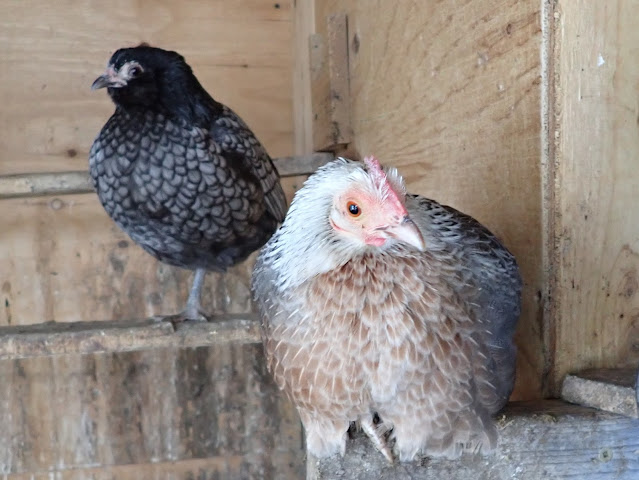