A visit to Nova Scotia

The province of New Brunswick, where I live, shut its borders in early May in response to the COVID-19 pandemic.  That meant that only essential workers and law enforcement could cross the provincial borders to either Quebec, Nova Scotia, Newfoundland, or Prince Edward Island.  Of course, the border to the US was also closed.  Last weekend, after several months of the closure, the four Atlantic provinces decided to form an Atlantic "bubble" because all the provinces have very low numbers of active cases (I think it's 6 or 7 cases between all four provinces now).  I was really pleased because I was finally able to visit my parents in Nova Scotia.  I hadn't seen them since Christmas, even though they only live a couple of hours drive from me.  The borders to the rest of the Canadian provinces and to the US are closed, although land owners can come in but they have to self-isolate for 2 weeks before they can go anywhere public.

Anyway, as you can probably imagine, there was a bit of a frenzy of travel on the first day that the 'bubble' opened, and that was the day I left for Nova Scotia.  I left at 8:45 am, and normally, it would take me about 7 or 8 minutes to get to the border.  Instead, due to the line-ups, it took me 1.5 hours to get to the border!  This was because there was a LOT of traffic, but also because every vehicle was stopped to question the occupants about their destination and determine the place of residence of the vehicle occupants. This is for contact tracing purposes.  I was stopped in traffic, so it was OK to take a picture. 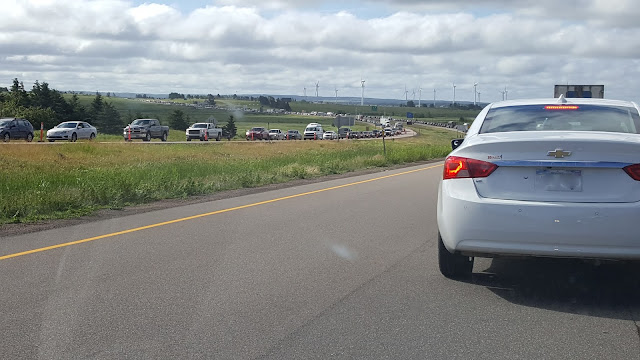 Traffic later in the day was backed up for 5+ hours, and they had to install porta-potties as a result of the line ups.  When I was in line, there were people walking their dogs and just getting out of their cars to wander around for a while as they waited.  It was kind of crazy.  I didn't see anyone relieving themselves in the ditches but apparently that happened later in the day.  Ugh.

Anyway, it was absolutely wonderful to get to see my parents and spend a few days in their company again.  It's amazing how we take these things for granted until suddenly the opportunity is gone.  My parents lived through the second world war in England, so they had years of experience with food rationing and restricted movement.  People of my generation have never had to deal with this kind of situation.  Fortunately, for me at least, it wasn't a significant hardship, especially since I already work from home.  The biggest things I missed were visiting my parents and getting together with spinning or knitting friends.

My parents' garden was absolutely lovely to visit at this time of year, with loads of roses in bloom and many other flowers.  In addition, of course, I was busy photographing insects.  Here are some of the pictures I took on my visit.  Here are some of their roses - just glorious.  The one in front is named a campfire rose, and the blooms change colour with age, from yellow to pink (or pink to yellow, I'm not sure!) 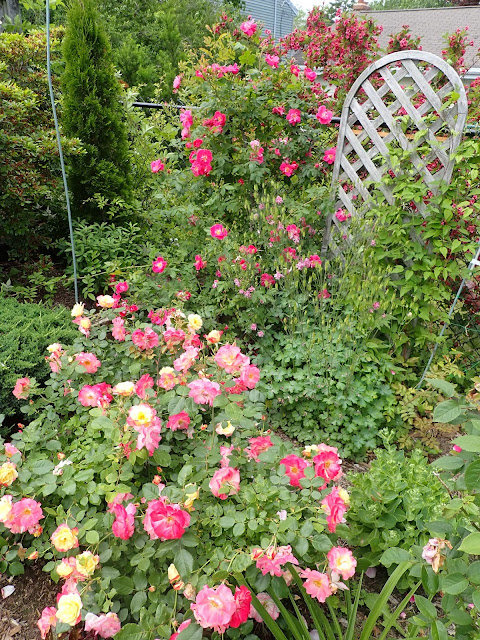 This is a scarlet malachite beetle (Malachius aeneus) on a foxglove flower. It was the first time I had seen one of these. 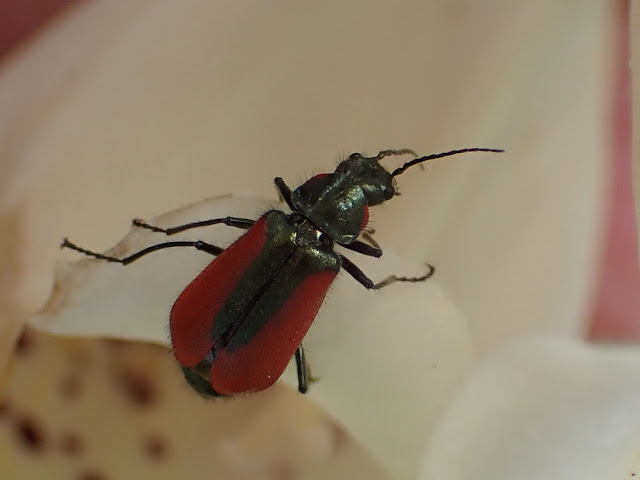 A close-up of a campfire rose bloom. 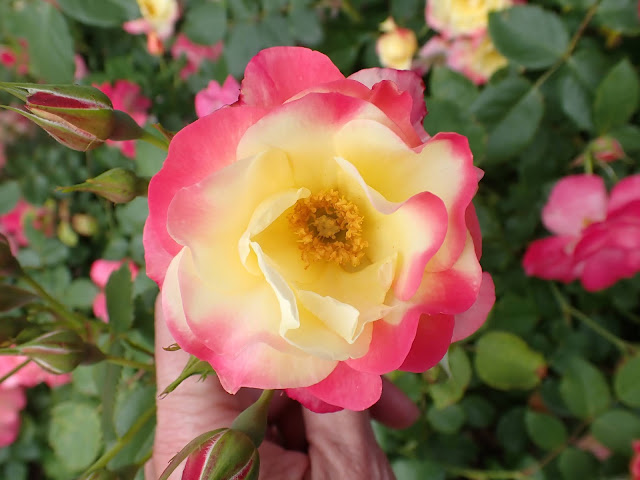 This is one of the David Austin rose line, but I'm not positive which one.  Lovely blooms and ever so fragrant. 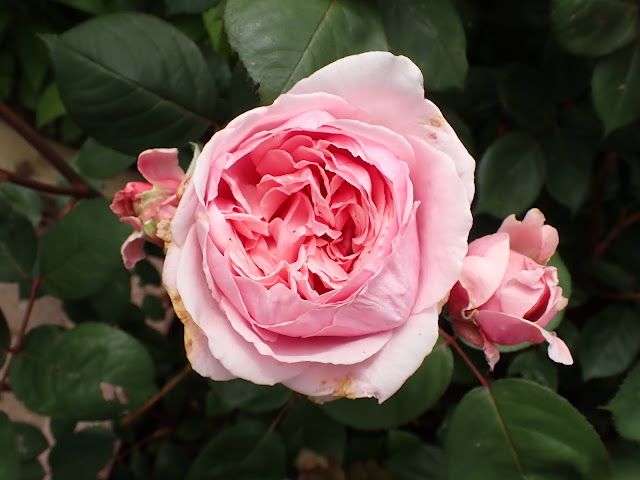 This is a European wool carder bee (Anthidium manicatum) taking a rest in a foxglove flower. They are called wool carder bees because they scrape and gather hairy fibres from leaves and flowers to use as nest material and carry it with their legs in little bundles, so it sort of looks like "wool." 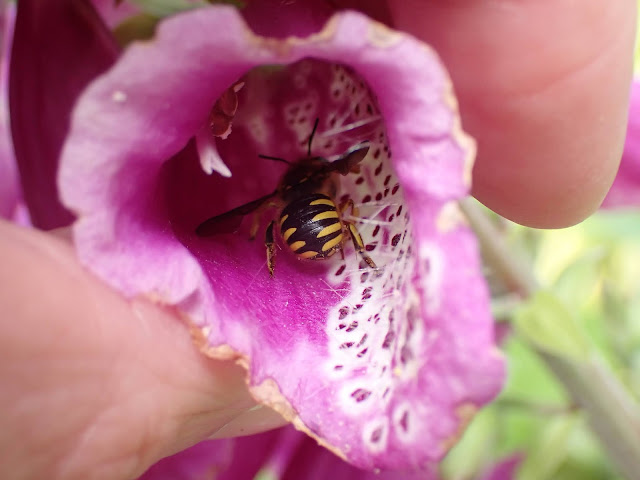 A beautiful double columbine flower.  Such a rich colour...looks like grape jelly! 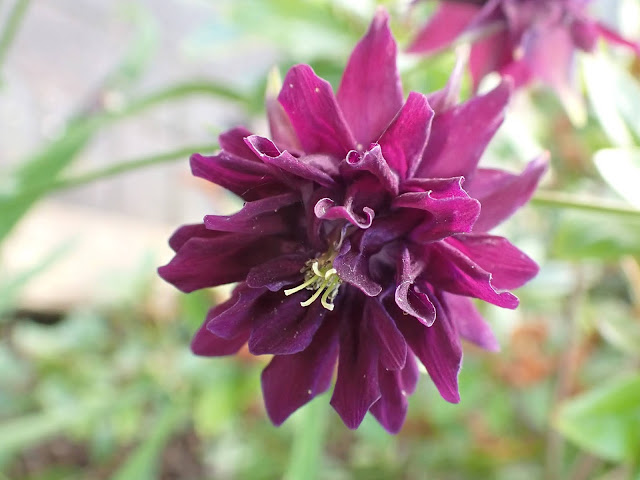 I don't often take panorama shots, but here is one I took of their backyard flower beds.

A stunning Japanese maple, flanked by foxgloves (shared from my garden!) 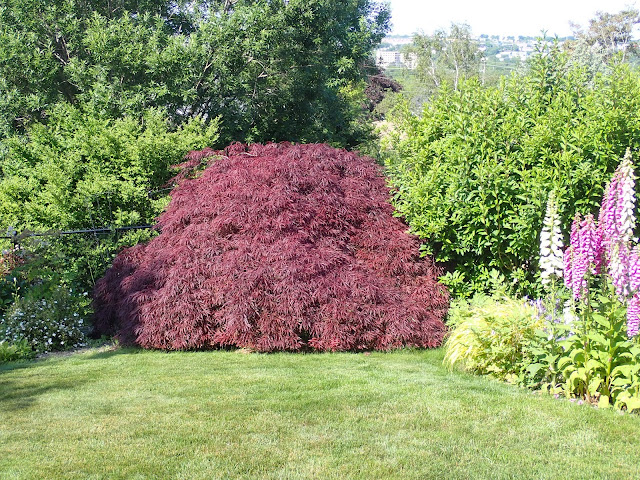 Yet another beautiful rose coming into bloom. 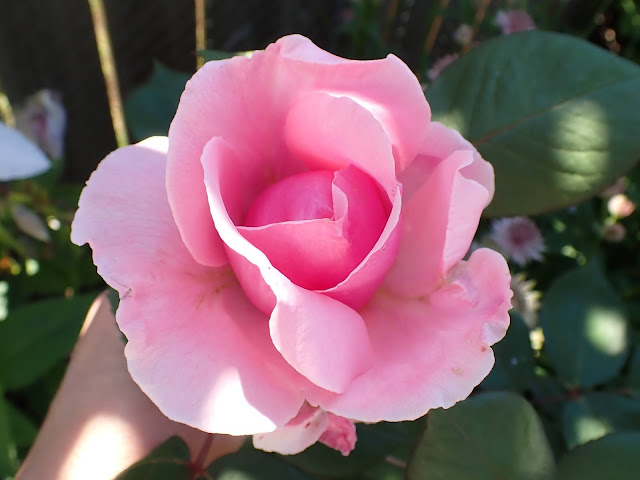 It's absolutely delightful to sit and take in the glorious colours in their backyard, and as long as the neighborhood kids aren't making an infernal racket, it's really peaceful and inviting. 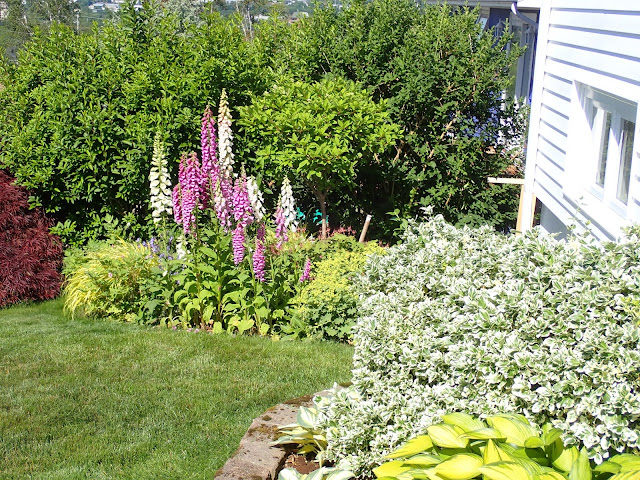 This is my first observation of a bee from the subgenus Hylaeus, or masked bees.  I haven't been able to make a species ID on it.  They are very small bees. 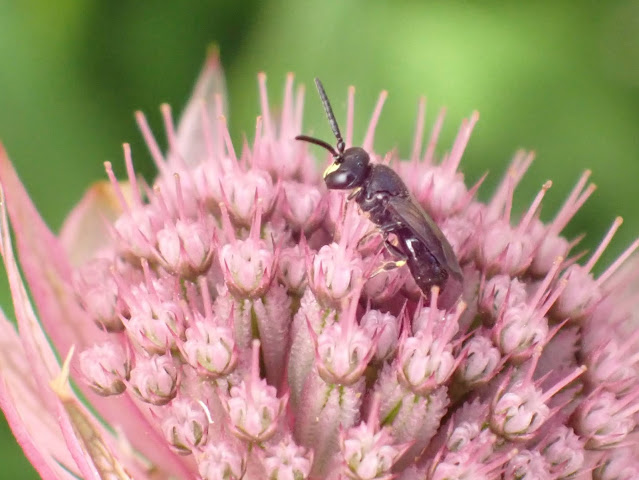 This was also a first time observation for me.  It is a hawthorn mining bee, Andrena crataegi, confirmed by bee expert John Ascher on iNaturalist. 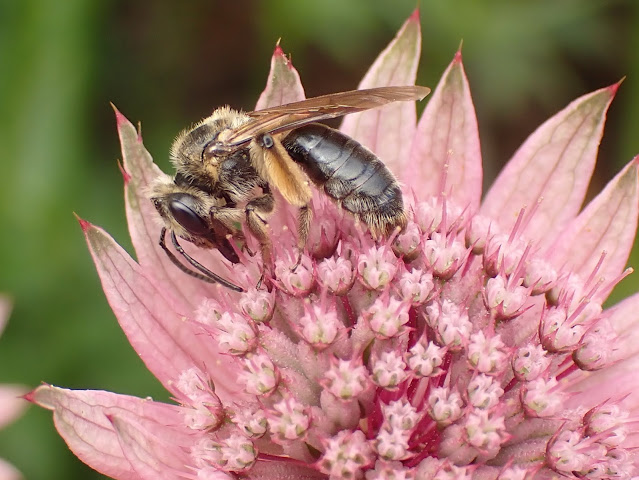 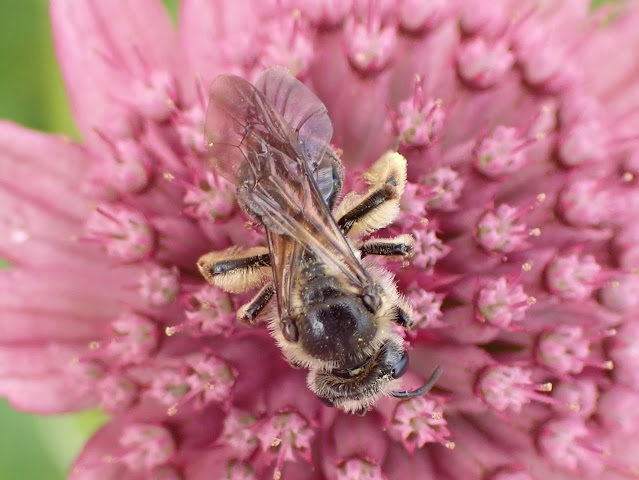 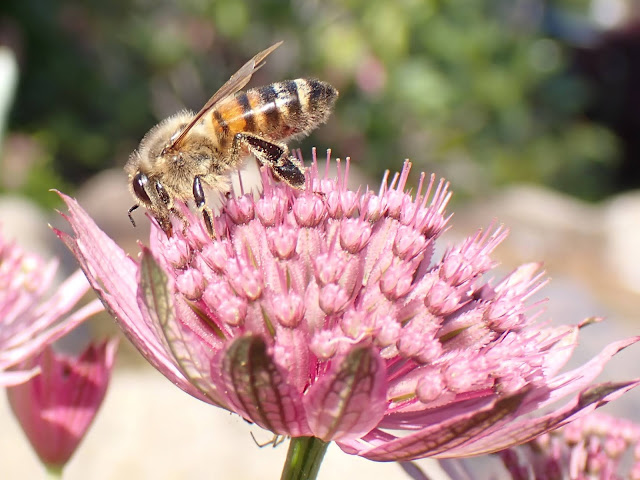 All the bees were going crazy on the masterwort (Astrantia) blossoms, so I'm hoping to get some for my garden as well.

I'm so glad I took the time to visit and enjoy the hugs and love that only parents can give!
Posted by Claire MW at 8:30 PM 5 comments: