In which the hens pretend to be the Easter Bunny

I think that sometimes the hens tire of laying their eggs in the same place, or perhaps they wish to spread out their laying areas in order to increase the odds of having some eggs not get taken by predators, such as might occur with "wild" chickens.  On the other hand, perhaps they merely wish to confound me, so they can sit back and cackle as I try to find their latest hiding spots.  For the most part, they lay in the intended nest boxes, which are supplemented with some lovely hand-turned wooden eggs my father made, giving the hens the impression (I think?) that their eggs will be "safe" in that spot.  Recently, I found that they'd chosen another spot, thanks to the snow.

Here you can see my footprints on the right, accompanied by Jet's prints, where we strolled along on our walk on a recent afternoon.  Crossing our paths, you'll see some familiar-looking tracks. 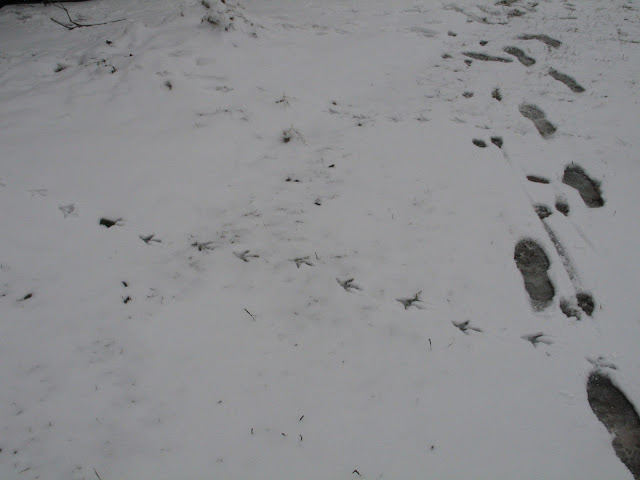 Chicken tracks aren't unusual here, of course, since I do have 16 hens and 2 roosters here on the farm.  I rather like their little footprints in the fresh snow - they're so distinct and deliberate. 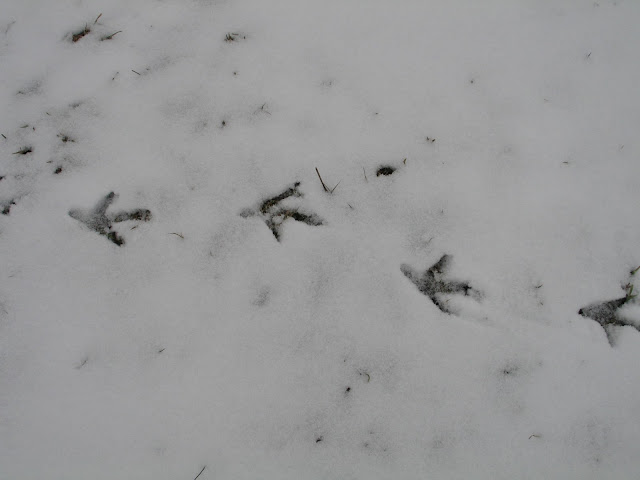 There's an old dog house left by the former owner that's off to the side of the driveway - I never use it, since I haven't got an outdoor dog, and thus have no need for it.  I rarely notice it, really, since it's obscured by wild shrubbery and alders. 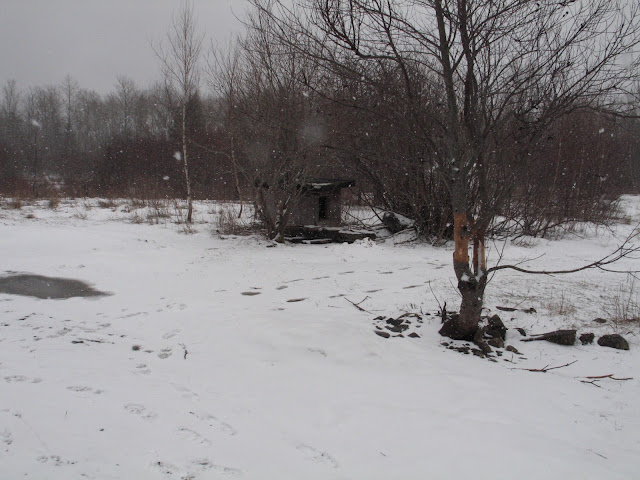 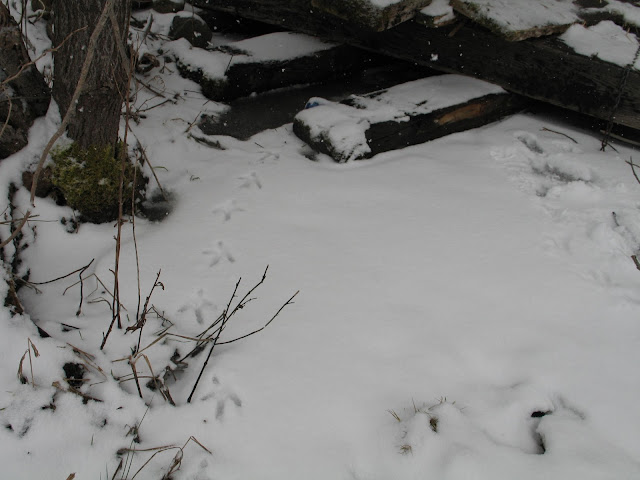 Then I had another thought.  I remembered that there was hay in the old dog house, still left there from the previous owner's dog who must have used it as bedding.  It occurred to me that if I was a chicken, looking for a good spot to lay an egg, this might be appealing.  So, I went forth to take a closer look. 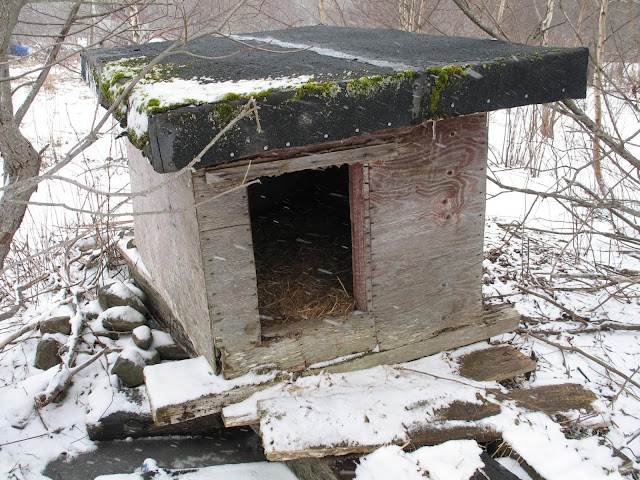 Here's what greeted me!  "Happy spring!" they said (despite the snow). 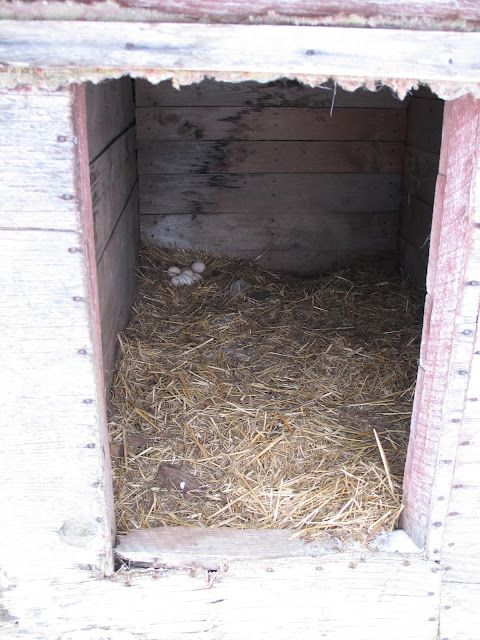 A lovely total of 7 eggs were carefully harvested with the help of a long stick.  None of them had frozen solid and the float test showed them all to be fresh.  So, now I have 2 places to check every day for eggs.  They've continued to lay here, even though I've discovered the cache.  I suppose now I shall have to wait for the next hiding place! 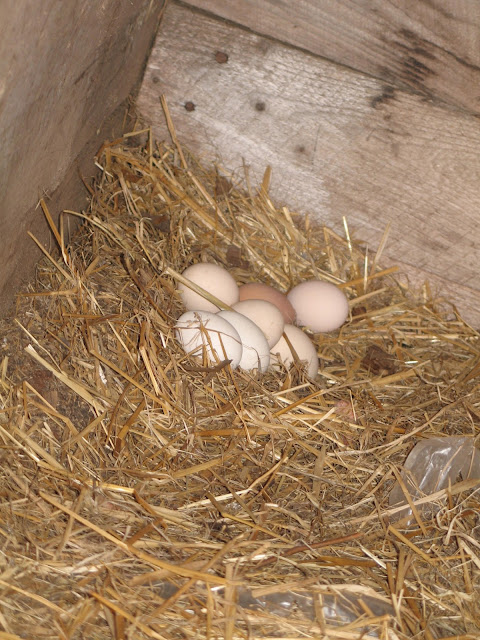 I took Jet out for his usual walk first thing this morning.  We have our little routine - we walk before he gets breakfast and before I get coffee, but I figure his bladder is our top priority.  This morning, it was wonderfully sunny again, but the frost had been heavy last night, and all the trees were wearing their robes of fleeting diamonds, glinting and sparkling for a brief time before the sun stripped them of their finery.  I tried to take some photographs but had real difficulties in getting the sparkle factor to even approach the "real life" view.  Still I managed to take a few shots worth sharing.

The sun was rising and there was a faint haziness as I looked off into the tree line. 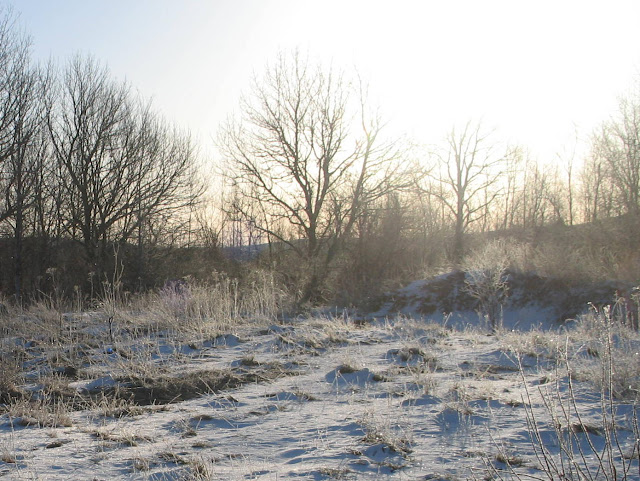 It's so disappointing to see these pictures upon download - if you had been there to see it, these two shrubs were absolutely covered with sparkle, and even slight movements of my head would bring out a whole new crop of different sparkles.  Just breathtakingly beautiful - here you can only see hints of some of the glinting.  Why oh why does my camera not show the sparkle?! Here you can see how the crystals form in ordered lines along the branches of the trees.  When I looked closely, I could see how each one was a slightly different shape and conformation. 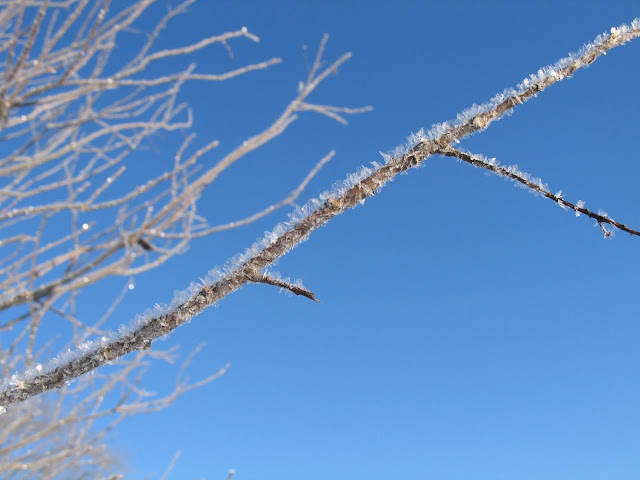 The alder cones had their own little fancy jewels adorning their little brown bodies. 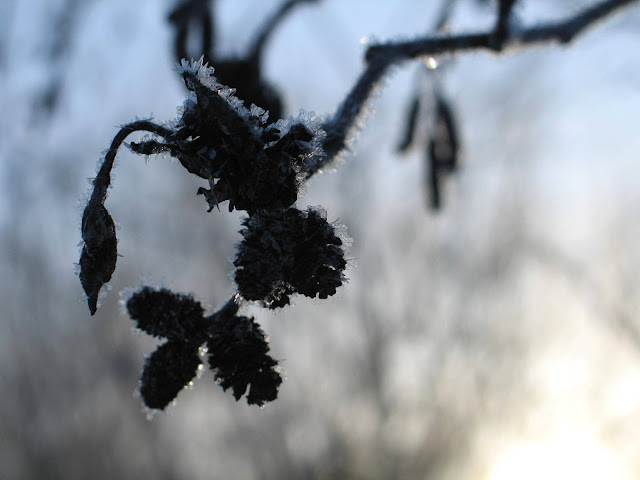 Not everything is brown, though!  Here some russet coloured catkins hung in their frozen garments. 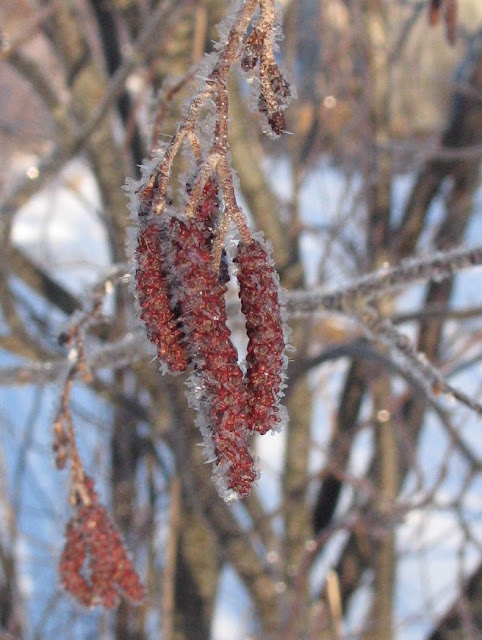 The sun was carrying on its steady march into the sky, and I knew those crystals would all be gone before long. 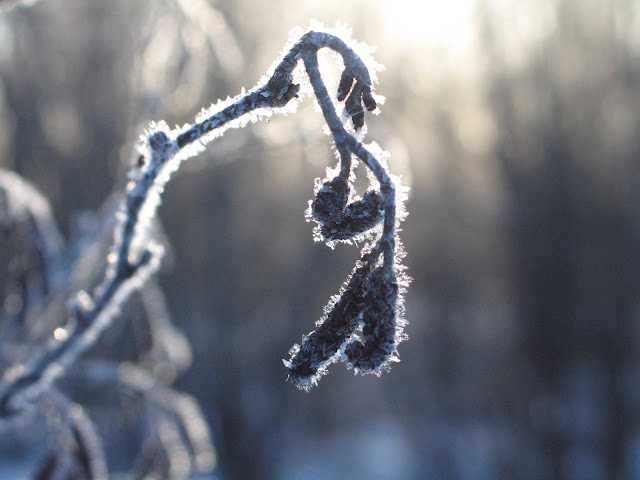 Dried seedheads from last year's wildflowers sparkled all around me. 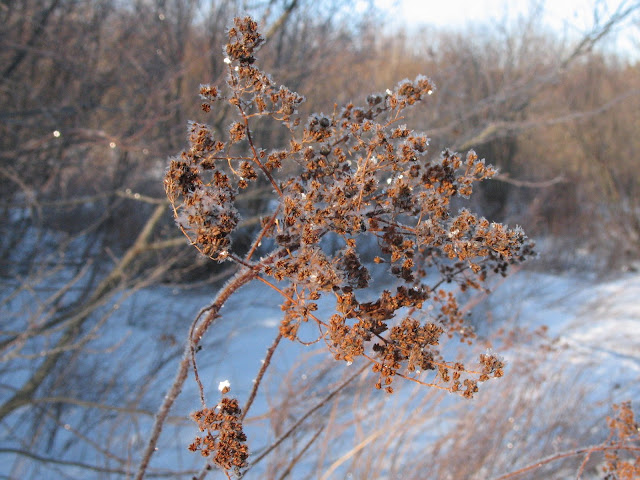 I thought the catkins were particularly photogenic. 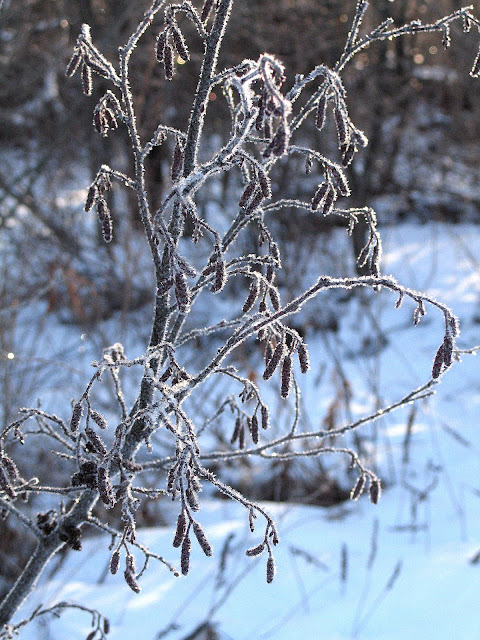 My favourite photos were those that found touches of red in that wintery landscape.  Here are a couple of pictures of frozen wild rose hips, their rich red contrasting with the blue white of the shade. It was a shame that the sun wouldn't touch these for a while, otherwise their colours might have been even brighter. 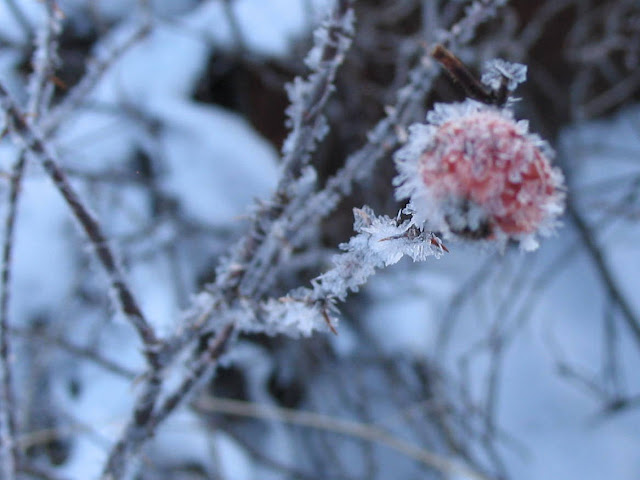 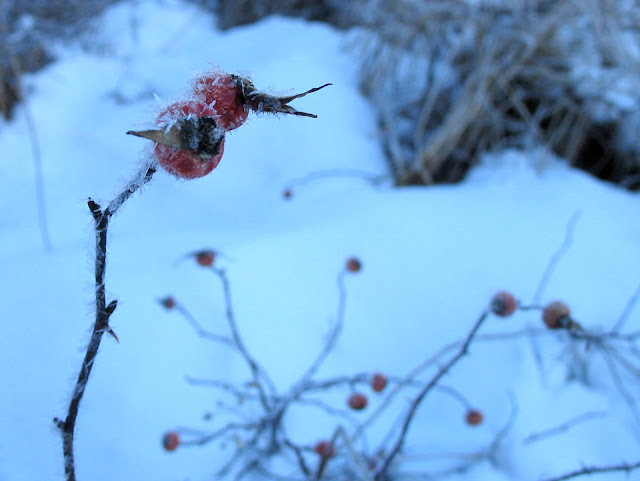 Also a branch of red dogwood caught my eye - this one in the edge of the sun's grasp. 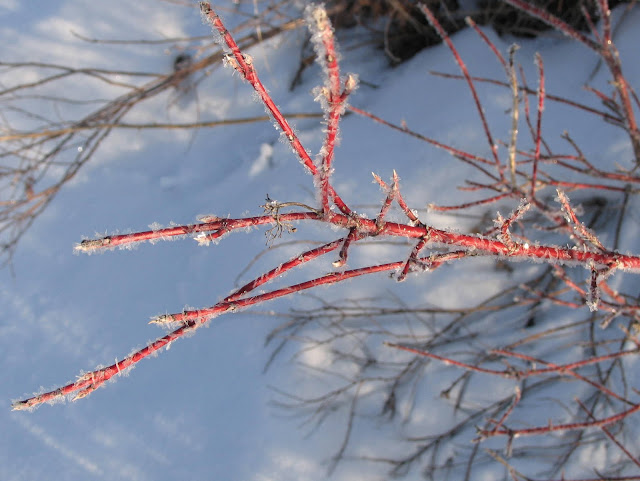 Later on, the sun went to hide behind the clouds and there was a short lived snowstorm this afternoon with near white-out conditions.  I'm glad I got to see the morning's finery before it was all covered up by the snow!
Posted by Claire MW at 9:36 PM 7 comments:

As I write this, the snow is falling again, thick and heavy, in flakes like slices of marshmallows.  Yesterday, though, and the day before, there was a delightful melting phase.  It is only mid-March, so it was quite unusual to have two days that reached nearly 10 degrees Celsius (50 Fahrenheit).  Even overnight, it stayed mild and didn't drop below freezing, but it rained torrentially for hours on end.  While I enjoyed being able to walk Jet without having to wear mittens and a scarf, the warming trend also made a muddy mess of my front yard and driveway.

The driveway had been covered in thick ice, but now it's nearly clear.  Underneath the ice and snow, the soil has not yet warmed, so the melt water didn't permeate the soil much - it stayed on top and created rivers of water everywhere, although the road is now pleasantly clear of ice.
The drainage ditches that follow the sides of the road fill with snow over the winter, particularly as a result of the snowplows pushing all the snow into them.  The great piles that lined the road are now much depleted.

As you can see, the remaining snow was melting quickly, forming deep flowing streams of melt water.
Jet was excited about all the newly revealed smells that had been hiding under the snow.  He sniffed incessantly along the banks. 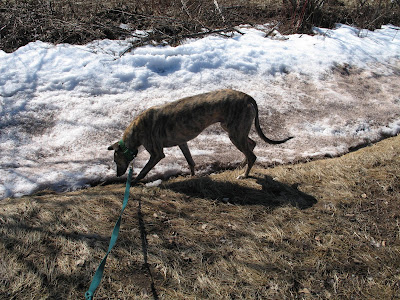 The normally tranquil and slow stream that goes across my field was a raging flow, being filled by innumerable small streams coming from the melting occurring on the land.

Even under the snow and ice, I could hear the noise of little rivulets of melt water, which made their way to join the stream, where the high flow had formed unusual structures in the remaining snow and ice as the melting continued unabated.

Lest you think that winter is ending, though, let me show you - there is still a lot of snow in some places, and it is still quite deep!
That said, as I walked and sloshed my way through the field, I began to see little signs of spring.  The greening of the world is still a long way off, but there were some encouraging signs.  Here's a picture of some swelling buds on a dogwood - I love their cheery red colour.


I also noticed that the mosses are adopting a much brighter green shade, enjoying their exposure to the sun and starting the cycle of growth and greening that will transform the land once again.

I leave you with a little video so you can hear the rushing sound of the water.  Every time I open the door, I am immediately struck by the loudness of it - I normally don't even hear the stream.  Now, it's a constant noise.  I love the sound of it - somehow calming and rejuvenating.  Today it's snowing, as I mentioned, but the spring will come, day by day.