Back to the Blogosphere! Here comes the garden!

Hello Blogosphere!  It has been a long time since my last post, but I do have a very good excuse.  My parents visited from Canada for two delightful weeks and I was a busy little bee the whole time.  Then of course there was a week of playing catch-up at work because two weeks of work was sitting there waiting for me upon my return.  It's the only bad thing about taking time off!  Now I'm finally finding a bit of time for a blog.  I have much to blog about, but one topic at a time...so let's start with the garden.

So, you may recall that I posted here about the plans for my raised bed garden.  Well, today's post is mostly about the absolutely INCREDIBLE effort my parents put in to help me realize a huge portion of that plan.  We completed the entire top quarter section consisting of 14 raised beds!!  This would have taken months of work without their effort, and there is just no way for me to fully express my gratitude for their time and effort.

The area that we began to work in was thick and high with weeds.  I don't just mean a few dandelions here and there.  I mean a full on assault of weeds.  The majority of it was prickly lettuce and lamb's quarters, along with a lot of daisies, some sort of bindweed, loads of grassy weeds, and some enormous sorrel plants thrown in for good measure.  Most of it was between 18 inches and 3 feet tall.  It was very dense and difficult to walk through in some areas.  Here's a picture showing some cleared area in the foreground and uncleared behind it.  All weeds.  All of it.  (except the grapevines on the far right).  It was dreadful challenging.

After some major sessions removing weeds and feeding them to the goats and sheep, my Dad and I took careful measurements.  He had been building some 8 by 4 foot beds that were 10 inches deep.  I'd purchased the lumber before they arrived and since the weather had been somewhat uncooperative (i.e. raging thunderstorms), he'd spent time assembling these beds.

After we measured, we placed the first set of beds.  My Mom then helped us lay cardboard flat inside them to block the remaining weeds at the bottoms, and then we began to fill them with layers of composted manure, decomposing straw, and a topsoil/compost mix.  The cardboard is at the bottom and will decompose over time while preventing the weeds from coming up.

Throughout their visit, whenever the weather was clear for a while (and believe me, that was a bit of a challenge), we would all go out and work on the garden.  The progress was steady and before long, it was really starting to look good!


Superman My Dad also made some lower height raised beds which I plan to use for perennials like rhubarb and strawberries.  At the moment, all the raised beds are being used for annual crops because it's a bad time to be moving perennials.  When things begin to go dormant in the fall, I will be moving the rhubarb up to the raised beds into a more permanent home.  I also hope to start an asparagus bed next spring.

Here you can see that the front beds have already been seeded, and then had a generous sprinkling of llama poop beans.  Excellent fertilizer. 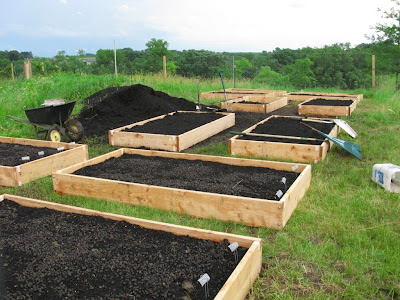 The next phase of the botanical masterpiece kitchen garden will be the addition of raised beds for the black currants, red currants, white currants and gooseberries.  Those will also be lower height raised beds because the currant shrubs will be worked into the existing soil.

Here you can see Superwoman my mother and I hard at work seeding the raised beds.  Even though the humidity was beastly and the sweat was pouring off me like a waterfall the temperature was high, we kept diligently working away.  You can also see the shallower raised bed frames are currently sitting on top of some of the deeper beds just as a "resting place" until they are in their correct location.  We also put in a few tomato transplants that Kelly got from work, and a sage plant. 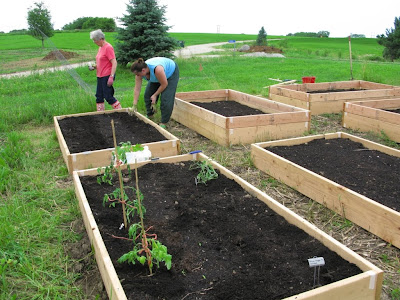 Raised beds are soooo much easier for weeding and seeding than working in the concrete heavy clay soil that I have here in Iowa.  The soil here is very dense and heavy and so full of weed seeds.  The weed pressure is tremendous, and the roots are hard to pull because of the soil type.  The soil in the raised beds is much easier to work and will allow me to weed quickly and easily.

Here's a rather dramatic looking picture that my Dad took showing a retreating storm in the distance and the raised beds in the foreground.  That sky isn't dark blue - it's the deep grey-blue of an Iowa thunderstorm,b ut the greens are bright because the sun is beginning to emerge from the opposite direction (i.e. behind the photographer).  We saw this view almost daily, it seemed.  But, it was great for seeds! 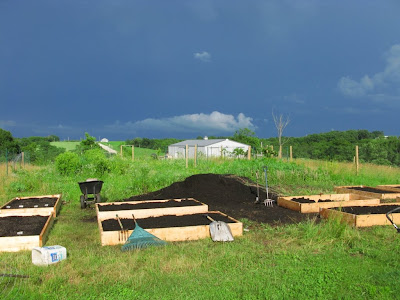 Before my parents' visit ended, the seeds we had planted were already coming up.  In the next few shots you can see radishes, beans, melons, zucchini, beets, carrots, and other delights beginning to emerge.

I know it's a bit late this year and I may not have great harvests of some things, but next year I'll be way ahead.  In any event, most of what we sowed is less than 75 days to maturity, so keep your fingers crossed for late first frosts!!

And THANK YOU to my fabulous parents, without whom none of this would be in place.  Seriously, I have the best parents anyone could dream of, and I love them dearly for who they are and all they do.


Garden bliss is mine! 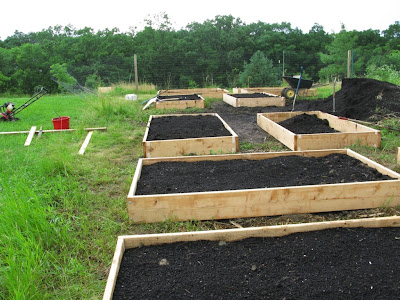 Yay! You're "back"! I was just coming here to post a comment on your last post, to say that I hoped things were ok on the farm, and that your posts have been missed! :) I'm glad to know that all is well, and you've just been BUSY! Congrats on the amazing progress on the garden -- parents are the BEST, and looks like you have keepers, for sure! I look forward to seeing more garden posts from you. My garden got a late start this year too, and we're getting harvest already, so I'm glad you weren't discouraged by a late start. I'm already looking forward to what I can plant in September! :) Good to read your words -- blessings to you and all the critters.

This looks so great. I am amazed at what you've gotten done considering the weather. It's been hard to do much of anything. So glad you're back to the blogging world.

I am so thrilled for you, for the great parents you have and all that you were able to accomplish together during their visit! Our parents are older than yours, but Rick's mom and my folks still helped with a LOT of weeding during their visits earlier this spring.

So glad you are back!!! I thought about you a million times over the last 2 days as we struggled through Pebbles' labor and delivery. I couldn't get Puffin out of my mind.
Anyhow, the garden looks fantastic. You will be rocking next year, although it looks like you are already rocking.

Claire, I would say that your original word, "dreadful", was perfect! I would have taken one look at that mass of weeds and gone inside for a nap! I'm guessing your parents are close in age to me, but it sounds as though their energy level is much higher!

What an accomplishment - and I know you still found time to just enjoy the company.

Garden Bliss is yours indeed!

Incredible the amount of work you three did together. Yes, you are truly blessed to have such amazing parents.
Mine only plant flowers and sadly, would never toil that hard in sweat in heat for me to have raised beds.
Which is why I had no garden this year. Between my knees and hips and no help, it just didn't happen.

I'd like to look into hip high raised beds. I saw a blog share some cool idea on creating these raised beds using wooden horses as supports. In this way, those who are older, with bad backs, arthritis, painful hips and knees...and even those in wheelchairs can still easily maintain a garden.
I thought it was brilliant!

Anyway, good to see you back. I can't wait to follow along and see how your garden grows.
The only thing growing well here are my peaches and apples.But at least we have no humidity and the temps have only been as high as 87F.

Can I borrow your parents??

So, are you going to be selling at your local farmers' market next year? Because that's a whole lotta food production for two people! I suppose we can expect to see lots of canning & preserving posts later this summer.

Before you start the next phase, can't you pen some goats and sheep in the remaining area to munch the weeds down a little? A literal field trip for your flock!

Glad to see you are back!!

I agree - your parents are awesome. I loved this post with the crossed out terms - made me laugh.