Speaking of Cleaning Up...

Unusual as it might seem, I feel compelled to blog about my shower.  This isn't because I need to ensure you that I'm a clean person, but rather because I know my readers seem to enjoy knowing some of the crazy things about this new adventure of mine, and sometimes these things are pretty amusing, even if they are kind of strange things to write about.  Today, I'm going to tell you about the old shower, and the new shower.

When we first viewed the farmhouse, there was so much to take in that we didn't really think too deeply about bathrooms.  We noted that there was a shower stall upstairs that needed work, but seemed like it would be ideal when finished.  This carried over to the second visit also.  We didn't see any shower or tub downstairs, but we didn't really register that because there was so much else to see (especially the clutter!) and think about.  After we'd visited twice, we thought about the former owner, who had quite bad arthritis and who avoided going upstairs.  We also thought about the fact that he appeared to have washed recently.  This led us to the conclusion that there must be another shower in the house on the ground level.  After inquiring, he assured us that there was indeed another shower on the ground level, and we laughed to ourselves in amazement that we had somehow missed it.

The shower we'd seen upstairs looked like this when we moved in. 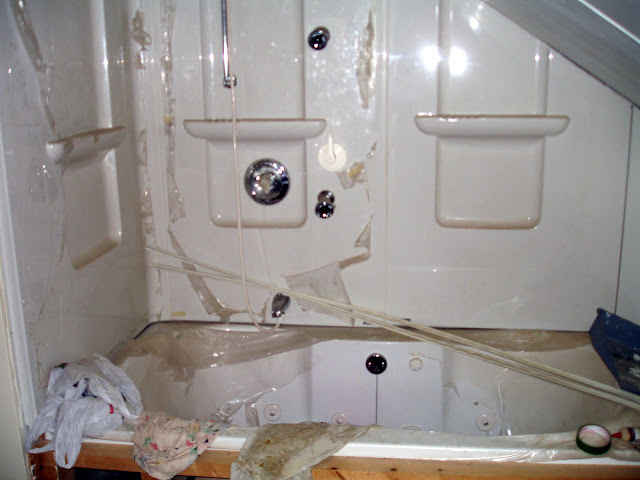 It was dusty and grimy, but essentially new.  It had accumulated dust over the approximately 10 years since it was installed.  Yes, you read that correctly....10 years.  Do you notice that it still has the protective plastic wrap on it that new shower surrounds come with?  That's because since it was installed, it was never, ever used.  Despite that, the tub was lovely and large and deep, and had jets on the sides for bubbles, and we felt that it just needed a little work.
Also, when we moved in, we discovered the downstairs shower.  And we were quite distressed.  So distressed, in fact, that I did not take a picture of it until Richard had sawed off about 8 inches of drywall, leaving that clean white line on the drywall to the left of the photo.  Seriously, you had to be some kind of contortionist to get yourself into the shower in the first place.  (note that the shower curtain that you see in the bottom of the tub was actually at the correct height - this was after it was pulled down once the new shower was finished. 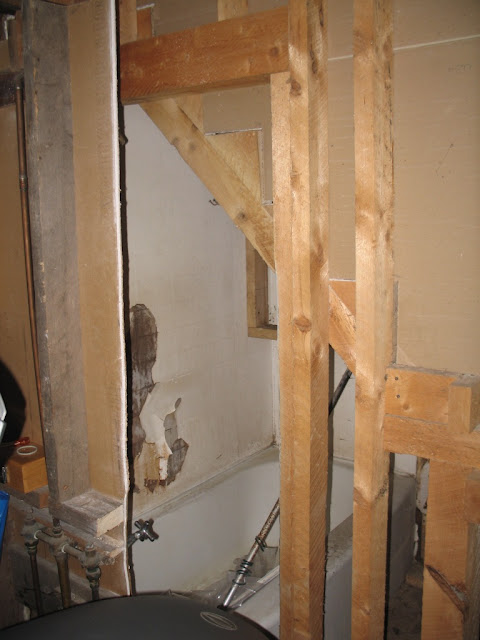 Even after you managed to get in there, let me tell you, it was not a pleasant experience.  Keep in mind that the former owner had been using this shower for nearly 10 years!  All the plumbing is exposed in the hallway downstairs.  This shower is not in a bathroom.  It is in the hallway to the front door!  It used to be a bathroom, but when the renovations began about 12 years ago, which included new stairs to the upper level, this tub and shower were left in place, but the rest of the bathroom was taken out to allow the stairs to be installed.  That would have been OK for a temporary solution but....ugh....here's what happened over the years it was used.... 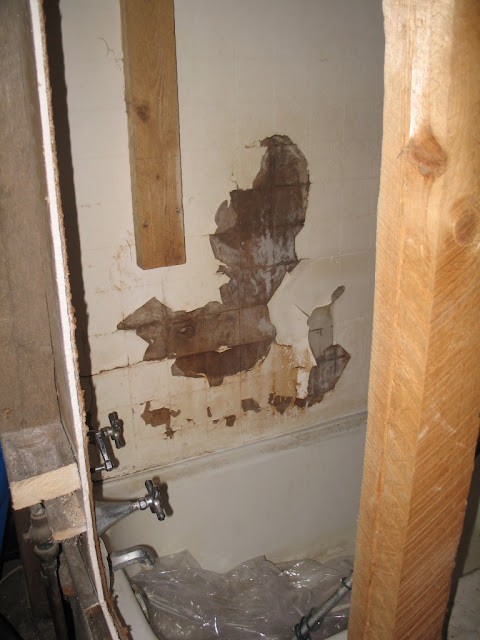 Oh, and don't think that removing that length of drywall made it that much easier to get in.  No, you have to step over the old heating grate too, which rises over a foot off the round, as seen in the picture below....and yes the floor is really that grimy and I tell you honestly, that is AFTER cleaning it repeatedly.  I cannot stress how distressing this was! 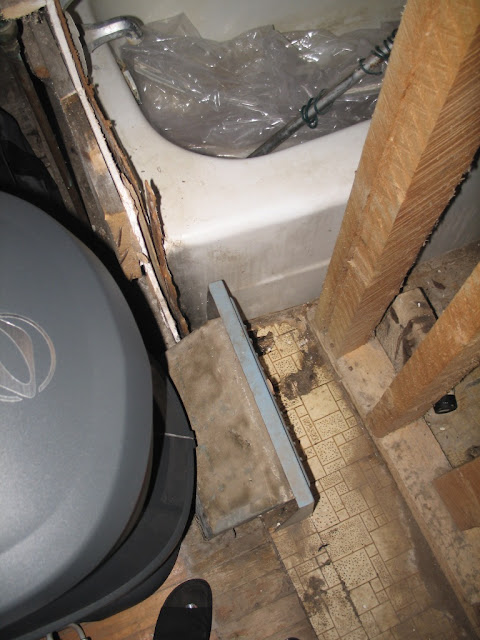 When you were actually standing and showering, and facing the shower head, you had a lovely view to your right of deteriorating tile board with some random pencilled calculations in the upper right, along with a view of some plaster and lathe and some wiring. 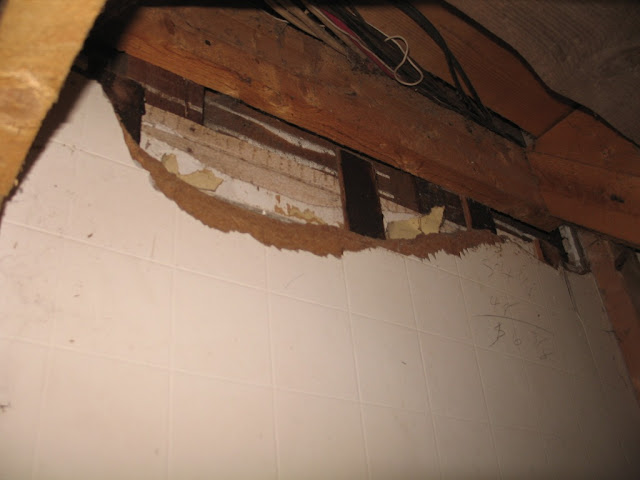 Meanwhile, to your left you had a view of....the stairs! 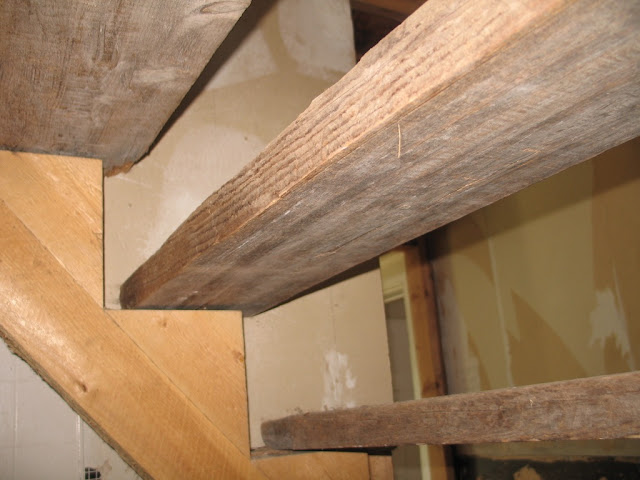 And anybody going up the stairs had a lovely view of....you in the shower! 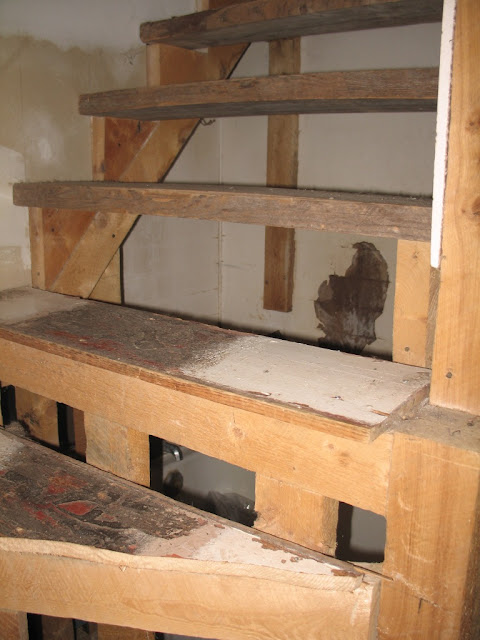 No wonder we're not ready for guests!!!  Oh, and try to ignore the rather dreadful stairs themselves.  Those will be the subject of a future blog post.
Needless to say, the completion of the upstairs shower became a very clear priority project.  So, back to the discussion of that plastic wrap that was still on the shower walls.  Usually, that sort of plastic is very easily peeled off, but not when it has sat untouched for years.  It took several hours of painstaking work to peel off the plastic in small pieces, and to remove all the layers of dust and grime from the tub.  In addition, we realized several things:
a)  the tub jets were not yet hooked up to any electricity,
b)  the shower leaked at the base of the tap,
c)  the water that leaked out travelled around the tub surround and poured onto the (wood) floor,
d)  the sloping ceiling presented a significant challenge to installing shower curtains or doors, and
e)  we needed a truckload of caulk to seal the entire thing because the gaps were immense.
So, the anticipated "afternoon project" of the new shower turned into a project of several days.  Many layers of caulk were installed and smoothed out to fill large gaps.  The leaks were identified and sealed.  The shower curtain problem was considered at length and a solution was developed.  The tub jets being hooked up to the electrical system are a project for another time.
However, we are now very pleased to have a clean, relatively normal shower that can be accessed without requiring a degree in gymnastics. 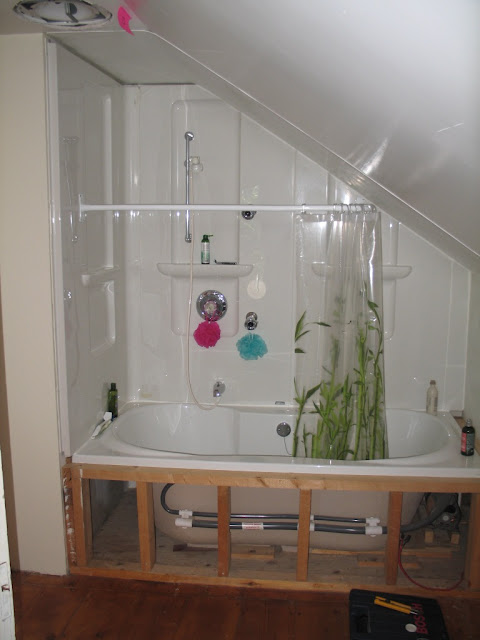 As you can see, the tub needs to be sealed off and the jets will be hooked up later.  However, the caulking is complete, the shower curtain is installed, and there is no risk of being viewed by guests using the stairs!  We still have a bit of a problem with water going onto the tub surround and then coming off the ends, but we plan to build up the edges with wood and do some tiling to keep the water contained, where it will naturally evaporate.  We think the tub was somewhat poorly planned, and will probably make further changes in future, but for now, having a clean, comfortable place to shower is truly a delight. 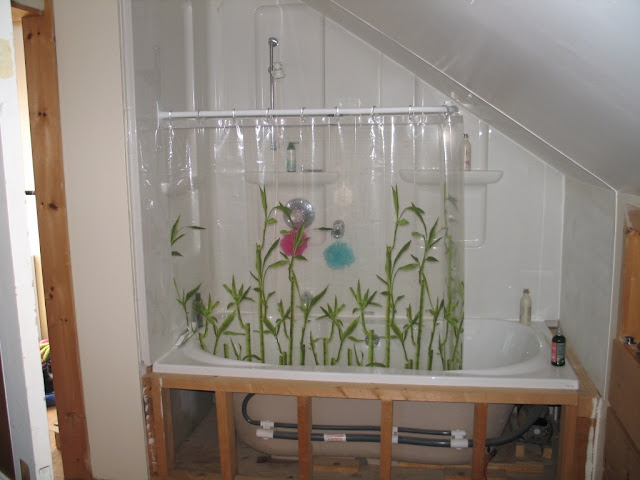 Of course, I chose a sort of botanical-themed shower curtain that has bamboo on it.  I had to cut the shower curtain short at the bottom because of course the matter of the sloping ceiling meant that the curved curtain rod had to be installed a little lower than normal.  However, this is a small price to pay for a "normal" shower. Now we are one step closer to being able to invite guests to the farm.  Have any cool or original ideas about how to further improve our shower set-up?  Please feel free to share - we're all ears!  (clean ears too!)
Posted by Claire MW at 3:48 PM

You have my most sincere admiration for attempting all of this. I'd have run away screaming, long before this.

That first shower reminds my lady of the shower in her first cabin. She wore shoes in it because it was so yucky...

The new shower and tub look lovely! Cute too! xoxoxoxoxo

I dont think I could ever get into that shower, but you have fix the new/old one very nicely. I too have a bath with jets, and to seal off underneath we have a series of doors. When they are all closed it just looks like timber panels but each opens up so you can have easy access to the pump for future repairs. It also makes cleaning close to the bath alot easier.

In my first house I had only an old claw foot tub and a hose thing with a sprayer - no shower. It really didn't bother me. The old tub was lovely and deep and I just sat down to wash my hair. Now that I have proper showers I don't take as many soaking baths and I believe I am the worse for it. But the shower arrangement in your house is truly bizarre. Thanks for sharing!

Oh, my dear...I am so amazed at your ability to take these things with a great sense of humor (even if you have to wait for the relatively normal shower before you can talk about it)! It's very cute the way you have it fixed up now!

I'm with Marigold. Just go with a good roll in the dust and shake the fur out! Great for keeping out the bugs and making you feel fresh.

My Life Under the Bus said...

OMG!!! I really enjoyed imagining anyone going up and down the stairs as someone else is trying to shower - thanks for that image! Good grief - we moved into this house and within a month my husband pulled the stopper out of the drain and the pipe disconnected from the tub and our laundry room below flooded whilst my husband was oblivious with the kids in the upstairs tub!
Gotta love the fixer upper!