This post is about a learning experience I had with Greta, one of our new goats. She's a bit skittish, as are her two offspring, Ptera and Buford. We had put Ptera and Buford with Pebbles, the friendly goat, to try to teach them that humans were not big scary monsters. We put Greta with Opal, our Nigerian Dwarf, to help her acclimate to us also. Opal is our lap-sitter goat.

I'm still new to goats, so I look at ours often to keep an eye out for things that don't look right. Last week, Greta's udder was looking really swollen on one side. We decided we had to corner her and catch her in order to check it out, and sure enough, it was very warm to the touch, swollen, and reddish coloured.

The first thought we had was "Oh my goodness, she's pregnant" but after consulting with her former owner, we determined this was impossible due to the fixing date of her son, and due to gestation length in goats (she would have been about a month overdue). So, the next concern was mastitis. It's a bacterial infection in the udder, quite common in cows and other milking animals. After some consultation on a goat discussion forum, including some pictures I won't include here, I determined that it must be mastitis, and took myself off to the farm store to buy needles and penicillin G, the recommended treatment.

Mentally, I was steeling myself for the road ahead. Learning how to give a goat an injection in the hind quarters is something I seemed to have missed out on in school. I must have been sick that day. Further consultations with the goat discussion forum folks made me feel that yes, I can actually do this.

After catching Greta, I knelt beside her in an effort to calm her. I talked softly and tried to say goat-calming things. She had a wild look in her eye. Eventually I got around to checking her udder and looking for any discharge or other nastiness. In my checking, I squeezed, in a milking sort of way, and BAM, out came a squirt of milk so fast I had to duck. We grabbed a bucket and sure enough, she didn't have mastitis, nor was she pregnant - she was just STILL lactating a year after her last kid had been born!

Turns out that Buford, Ptera, or both were still nursing enough to keep her lactating a little. Since we separated them, the milk had accumulated over about a week to the point that she was fit to burst. Poor Greta. It took my very unskilled hands about half an hour to milk her and then Kelly had a try for another 15 minutes or so. We ended up with about 6 cups of milk. Because we hadn't really planned for this, we ended up giving the milk to the chickens, who loved it, and the young goats. We had milked into a bucket that hadn't been sanitized and had hay residue in it.

She isn't producing normal milk loads - just a bit. We are going to give it a try again tomorrow. And this time, we will give it a try ourselves!

In the meantime, Muffin the pygmy goat has taken up residence in the hen house at night. She seems to enjoy their company, and they seem to like her as a pillow. Seems that we weren't the only ones to benefit from some learning about goats this week! 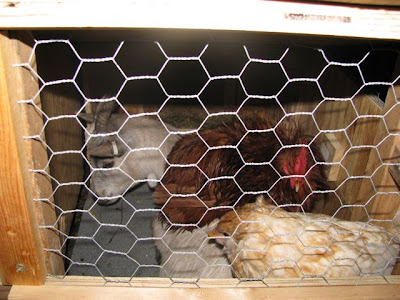