I was gently amused by a blog post on Frolic n' Fibers a couple of weeks ago, which noted that llamas have very graceful bottoms. It's not very often that I specifically look at my animals' bottoms, but that post made me think about it. So today, I'm celebrating with bottoms up on the farm! Let's take a tour around the back side of the menagerie...

I'm starting with the llamas, since that is where the idea came from. Lilly wouldn't cooperate with turning away from me - she likes to keep an eye on what I'm doing. Cabernet and Hazel nonchalantly munched away while I photographed their shaggy side. Zak the goat just couldn't resist getting in the photo, so we have his spotty contribution on the right hand side. Cabernet has a slightly shaggier and wider posterior than Hazel, but both are very fluffy. I'm sure they stay nice and warm that way. Not that I wish to personally have a shaggy backside, of course. 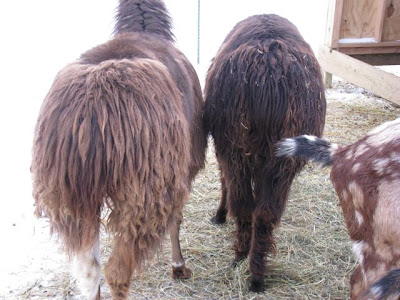 Moving on to the goats, I got a good view of Savannah. I think it's neat the way her black tail color is repeated in the back of her legs. And she's so modest with the way she holds her tail down too. A delightful bottom indeed. 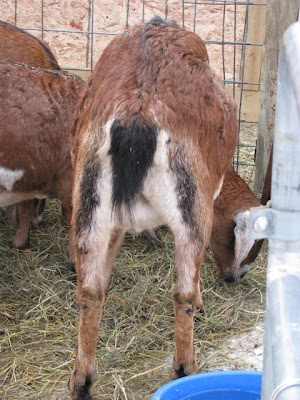 I then moved along to my roosters. And let me just say, there is a great deal of variation in the backsides of roosters. On the left, there is a lovely crele rooster. He's got the lovely curly dark tail feathers that make a fountain shape and when he walks, they sort of stream out behind him. In the middle, a Canadian chantecler rooster (one of my favorites!) and he looks like he's wearing enormous pantaloons. He's got a definite roll to his walk, and from behind, he looks a bit like a wind up toy. Then on the right, an Appenzeller Spitzhaben rooster, who is a very slim and streamlined rooster. He holds his tail very upright and you can see the distinct upside down V shape of it. No ruffles or pantaloons for that boy! We won't talk about his hairstyle today. 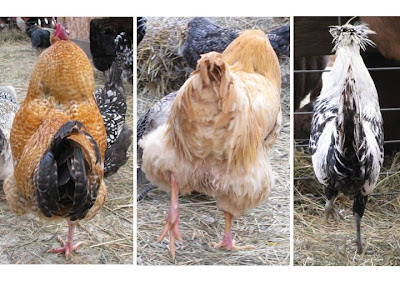 My gold laced cochin rooster is like a bowling ball on fluffy legs. He has the fountain tailed look of the crele, but even more pronounced. A handsome fellow indeed. The golden green sheen of those feathers is just gorgeous in the sunlight. And a very modest way to cover the nether regions. 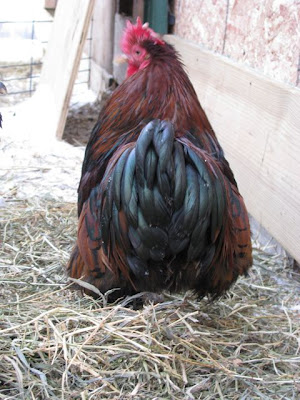 It would be wrong to only consider the roosters, so I looked at some hens as well. They have a generally fluffier underside, which is often on fine display as they root around in the straw. 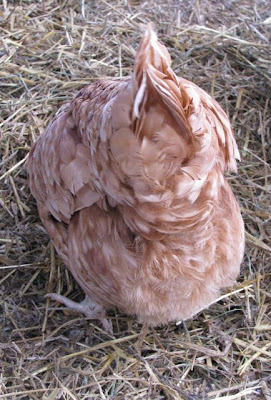 This hen has a lovely color variation in her bottom feathers. I love the way she gradually goes from the pale gold at the base up to the black of her tail. Feathers are a fabulous way to have a good looking rear view. 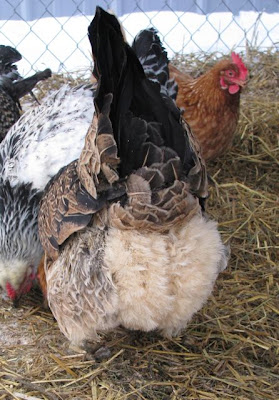 Our little Nigerian dwarf goat, Lotus, has just about the most dainty bottom on the farm. She has a very nice stance, with her little feet together like a model, and a perfectly groomed and fluffy behind, with the dark stripe down her back, into her poufy tail, and coordinating black furry booties on her ankles and feet. I do believe that she posed deliberately for this photograph! 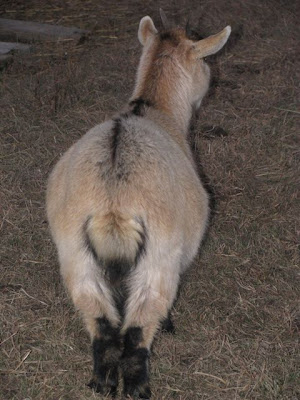 On the other hand, dear Poppy wasn't at all sure about having her rear view photographed. She saw the hay coming over to the manger and was off in a flash to get her dinner. I think she might have the best tail on the farm, because it's lovely and long and fluffy and gives her such character. So with this slightly blurry view of her tail, we round out the tour of the animals.
Now please, I don't want this post to become the "butt" of any jokes! 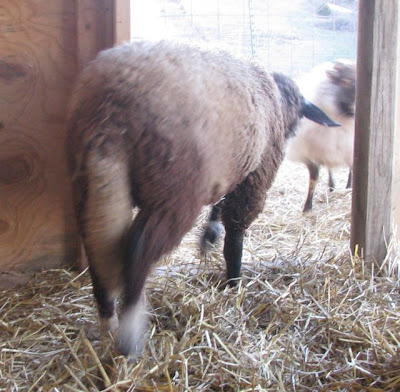 Bottoms Up!
I really couldn't resist.

I've been meaning to tell you, best of luck on your final exams. All the hard work will surely be worth it.

Those are some big roosters! (I guess, I don't really know roosters!)
Thanks for your comment on my blog ... I'd love to see some photos of your spring sheep--it'd be challenge for me to paint them! I was--and am--a big fan of the James Herriot books, and still remember how much he enjoyed spring--lambing season--it was his favorite time of year!

Ya know, I never really thought much about the rear view of our farm critters, but I must admit, your post had me fascinated. All your critters have such lovely little bottoms. I don't know which are my favorites, probably the llamas because I love them so.
But your Lotus is such a modest girl and posed so perfectly for that rear shot, as if she knew you were back there. lol!

I do so love my fluffy butt hens, too. And my Silkies are the fluffiest :)

Oh and I do love your long tail sheep, too She is very pretty. It's rare to see many long tailed sheep, as they are usually docked for cleanliness. Both of my sheep, my churro and karakul have long tails. They are so cute when they are wagging :)

Thank you for sharing a different perspective of farm critters :)

Is it just me or do Hazel and your gold laced cochin rooster have very similar looking backsides.....

Both equally nice looking, of course.

Okole Maluna (bottoms up in Hawaiian!):) It's hard NOT to notices the back ends of your farm animals....they always seem to be presenting them towards you! I always loved the fuzzy bums of baby chicks and they grow up into lovely feathered bums on the hens! Thanks for the fun post!!

Oh Claire, what beautiful bottoms you have! The chickens are outrageously gorgeous, but I must say I am partial to Savannah, with her tail delicately covering her nether-regions! And just for the record, my llamas are every bit as shaggy as yours :) Thanks for the giggle!

I was hping to see the bottoms of th Angora butts too. :-) cute post.

Very cute post Claire! My mom always took pictures of me walking away with one of my many animals and I have a montage of 'happy tails to you' pictures ;) Lotus does look like she was posing for you!

Hey, thanks for your comment on my blog. It gave me loads to think about and tons of hope!

*Whew* I am so relieved that I'm not the only person with an attraction toward animal bottoms...
I must say I REALLY enjoyed these pictures!! (maybe too much?!)