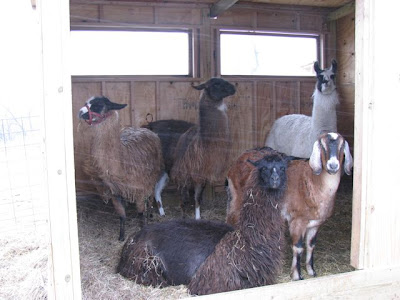 Present: Cabernet, Hazel, Lilly, Rosco, also Guest Speaker Mr. Xander N. Goat
Also the presence of a two-legged creature with the same small black box was noted. We feigned a lack of interest at its presence. The creature points the small black box at us and it makes a small beep noise. Sometimes it emits a flash of light. We are truly baffled.

SLICE was honoured today to welcome Mr. Xander Nubian Goat to the meeting, hereinafter Xander. He provided an interesting exposé on some of the goings on at the farm. Having reviewed a copy of our last minutes, he felt there were some things he could impart to our organization, and we thank him for his valuable time and information.

First, Xander advised us of a grave error in our thinking. The two legged creatures with feathers are not guinea pigs. No indeed, they are called "chickens" and we are grateful to have learned this valuable information. This explains why the two-legged creatures call "chick-chick-chick" in the morning while holding a small scoop of seeds. We find it most unfair that the chickens are given all the seeds. Occasionally, the two-leggers seem to enjoy letting us have a few seeds. This is usually a ploy to allow them to touch our valuable fur so that they can conduct research on how to grow their own fur. We think the seeds and cracked corn are very yummy and should be our primary diet. We think the chickens may not be deserving. They are very silly creatures but the sheep seem well acquainted with them. 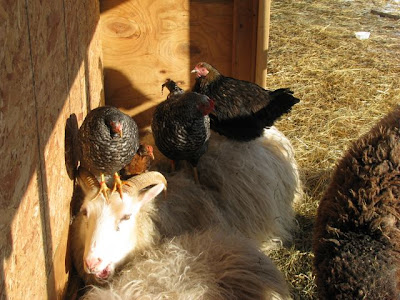 Second, Xander advised us that we may learn more from the two-leggers by pretending to be "lovable." This involves coming up to the fence when they approach and pretending to enjoy having our fur rubbed. It also involves sniffing at them and emulating what Xander calls "kisses" in order to ingratiate the two-leggers. We are not at all sure about this. We think we are above such behaviours and will consider how to incorporate other means of monitoring the two-leggers.

Finally, Xander advised us that they, the goats, do not really need to be herded by us, but they let us do it so that the two-leggers are amused and call them "cute" and give them extra feed. These goats are very wily and clever. We can learn much from their example.

Cabernet, Lilly and Hazel all welcomed Rosco to SLICE. 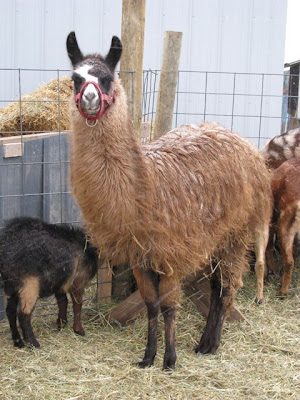 There was some consternation among the lady llamas, because Rosco is a male llama, and all the lady llamas were batting their eyelashes and carrying on during Rosco's introduction, such that it was hard to get a word in edgewise. Rosco appears unfazed by the attention. He reported on the outside world and the same white box with wheels that Lilly had arrived in. Xander advised that this is a "truck" and it is used for transporting us, as well as our hay. We have agreed that the truck is OK since it is used to bring hay. We remain somewhat suspicious of it, but have determined that we should not continue with our planning to crush it. Rosco reports having lived at a place called a "horse shelter" but he is not a horse, and is quite sure of that, because the horses smell entirely different and have big heads and very short fleece and he has no idea how they stay warm. He also reported a conversation when he was about to be transported that he was a "good deal for fifty bucks" and that the two-leggers were "glad to give him a good home." Rosco reports that he did not see any bucks at all, nor did he see any does, or even fawns, so he has no idea where the bucks are or why anyone would want 50 of them.

Lilly wanted to say how pleased she is with her new llama friends and how much she enjoys the camaraderie with the goats. Cabernet and Hazel are thrilled that she is with them and that she is enjoying her new home. Rosco said he was very excited to be here also. Lilly also reported the arrival of four new small creatures, who appear to be somewhat goat like, but she also thinks they might be sheep. 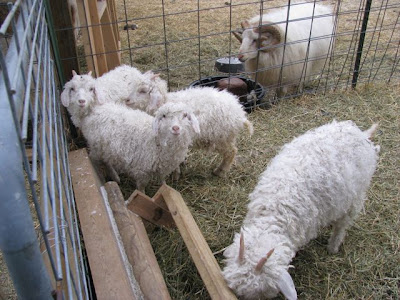 Lilly advised that she saw them arrive and that they were very grey and smelled terrible. She reports that over a short time, they suddenly smelled much better and were transformed into white creatures. This is very interesting and needs investigation. We will have a sheep guest speaker at our next meeting to comment.

Meeting adjourned due to snow starting to get heavy. Lady llamas jostling for best snuggling position beside Rosco. Xander returned to the goat herd. All is well.
Posted by Claire MW at 11:17 AM

lol! This report just made me smile HUGE! I feel so honored to have been permitted to read the minutes of the honorable SLICE, including Mr. Xander, of course.

The photos added such a realistic, although hilarious, realism to their meeting, too.

Thanks for the smiles this morning!

Thank you for putting a much-needed smile upon my face this morning!

Knowing that I put a smile on two people's faces this morning makes the time spent blogging worthwhile! I enjoy sharing stories from the farm, and reading everyone else's. Making someone smile is the icing on the cake!

Oh Claire...I haven't laughed this hard at a blog post in a long time. Well done!!
I love to laugh...thank you!

I thought you said you have exams to study for???? Playing in the barn is not part of good studying habits. For example, blogging should not take precedent over grading papers; HOWEVER, I do have 2 weeks of winterbreak coming.....oh and its not fair to post pics of Angora goats because I have always wanted one and I don't need anything else. Did I mention I thought this was a great blog entry today?:)

True enough, I should be studying, but the animals still need to be fed, so if I take some pictures while I'm out there, it really doesn't count. Besides, one can't really study nonstop for too long - one's brain has its limits. Well, mine does anyway! I just went out and did the evening feed and put the chickens up for the night. Too dark for more pictures, so back to studies for me!

Oh my Lord I am on the floor laughing. SLICE is funny enough, but the picture of the "guinea pig" standing on the goats' head is hysterical!! Thanks for the belly laugh, Claire- I needed it!!
(ugh, I think I've ruptured my spleen...)

Claire, I know you said that Jasmine would be welcome at a meeting of SLICE....but I'm afraid the group sounds like trouble!! She doesn't need to be given any ideas!

You llamas and goats are beautiful (I love how sparkly clean your Angoras look now!). Thanks for giving us a peek inside the private goings on of SLICE!

The goats are beautiful!!!!! I wouldn't recommend shearing yourself. We bought everything to do it ourselves and tortured not only the goats but ourselves. We now hire a shearer. He can do 10 in the time it took us to do two...and two badly.

Now that they are all cleaned up don't wash them before shearing. Their fleece has a yolk on it to protect it. Mine look dingy but when I wash their fleeces after shearing they are gorgeous!

Blessings from the Ridge and thank you for visiting. Love the llamas ...and so jealous you have Icelandic sheep. Those are my favorites.

Hi, llamas, hi, goats, hi, chickens, hi, Claire! I just found your blog thanks to my daughter, Diane, Loessismore, and I came home from a long day driving some friends around to get a great big smile from your posts! I went back to the one where you bathed the goats - that had to have been fun! Thank you for sharing such delightful stories.
Nancy in Atlanta

Thanks for the advice on the shearer - we will look into that. Maybe it is a slow learning process and we will just do one or two of our animals a year and learn in the process? I would like to eventually be able to do it.... We will not wash before shearing - thanks for that tip also!

Hi Nancy in Atlanta, from me and all the critters! So glad you dropped by, and hope to have you visit again!

Paula - glad to give you a laugh - hope the spleen is feeling better! LOL!!

Wrensong - I hear that SLICE has sent a bulletin to Jasmine. Just can't keep their activities under control here!

The chickens standing on the goats/sheep is too funny. I'll be looking forward to more SLICE meetings. The new goats/sheep look much better now.

Claire , you crack me up ! On a more serious note - since you have harsher winters than me , how do your llamas cope ? do they stay in a lot ? do you feed them differently? would love to know , you might give me some ideas . Meanwhile , keep up the good blogs !

What a funny post!
I think those chickens were smart to perch on a warm sheep back.

Hi Suzanne - our llamas seem quite impervious to the cold. Sometimes they just lay down outside in the snow! When it is extremely cold and very windy at the same time, they stay in the barn, but otherwise, they sometimes even sleep outside! Crazy critters! We give them double hay rations in the very cold weather but otherwise no changes. We have plug-in heated water buckets so their water is always available. They seem very hardy in the cold - even more so than I expected.

love it! SLICE!
can't wait for the guest goat speaker
next time, will they have names by then?